Scare tactics, UFO riffs and both kinds of buds 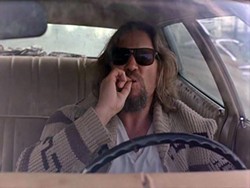 Sure, lots of other 1930s films exploited Americans' newfound fear of the evil weed, but Reefer Madness is the granddaddy of them all. There's a reason it's a cult fave, with its over-the-top performances and tales of dope-smoking that end in manslaughter, suicide, rape and insanity.

Plus, it has a strange post-release evolution that's more dizzying than a hit of one-toke: Originally titled Tell Your Children and funded by a church group to educate families about the hazards of pot-smoking, it was bought up by an exploitation film producer, who added some more scandalous shots and retitled the film Reefer Madness.

The film was re-released a number of times under different names, until it finally fell into the public domain. Then, in 1971, the film was rediscovered by NORML founder Keith Stroup, who bought a print and started showing it at college campuses across the country, turning the once-educational film into a campy classic, with legions of pot-smoking, laughing fans.

Surprisingly flaccid overall when viewed in retrospect, there is at least one scene from Easy Rider that remains a classic after all these years.

Sitting around a campfire, with crickets chirping away, Captain America (Peter Fonda) offers a first-time joint to the character played by Jack Nicholson. He's an alcoholic lawyer from a Podunk Southern town who reluctantly takes a toke after being assured he won't get hooked on it, and that it won't lead to "harder stuff." Traveling companion Dennis Hopper, playing a stereotypical stoner before there was a stereotype, sees what he thinks is a satellite overhead. At that point Nicholson starts to riff on UFOs, and the spacemen who have been "living and working among us" ever since scientists "started bouncing radar beams off of the moon." He goes on to explain how Venusians are mating with earthlings in an "advisory capacity." Nicholson rambles on, letting the joint go out.

"Save it," drawls Fonda. "We'll do it tomorrow morning first thing. ... It gives you a whole new way of looking at the day." "Well" giggles Nicholson, "I sure could use a little of that."

Tommy Chong and Cheech Marin surely weren't the first comics to get laughs out of the stoners vs. straights culture clash, but their genius was to make it their comedic center of gravity, first on stage, then on hit records, and finally on the screen. In their addled state, they invited the audience to laugh at them — but that was a consolation prize; what they were really saying was "laugh with us." Their hit Up in Smoke begat such successors as Cheech and Chong's Next Movie, Nice Dreams and Still Smokin' with the torch, er, spliff, later passed to such as teams Bill and Ted, Wayne and Garth (stoners at heart even if we never see them lighting up), Redman and Methodman and (most recently) Harold and Kumar. As Marisa Meltzer described their formulaic achievement in Slate: "The Cheech and Chong films created a template from which stoner movies rarely veer: two guys + a big bag of weed + some kind of task to complete = awesome times."

In the movie version of Michael Chabon's stellar novel, Michael Douglas gives one of his finest performances as Grady Tripp, a writer whose once-promising career has stalled after producing a critically acclaimed first novel. Teaching at a Pittsburgh university while pounding out a second book that has no conclusion in sight, Tripp is a heavy-duty pothead. During a long, alcohol-and-drug-infused weekend, one of Tripp's students, Hannah Green (played by a totally sweet Katie Holmes), after sneaking a peak at the never-ending opus, has the temerity to suggest that Tripp's problem might be too much weed.

"Well ... thank you for the thought," retorts Tripp, "but shocking as it may sound, I am not the first writer to sip a little weed. Furthermore, it might surprise you to know that one book I wrote, as you say, 'under the influence,' just happened to win a little something called the PEN Award. Which, by the way, I accepted under the influence."

It turns out that his bristling defense of writing under the influence crumbles like ash falling from a joint. But, along the way, a talented student, played by Toby Maguire, discovers weed for the first time. In one scene, he's wolfing down a box of powdered donuts, grinning like a monkey and licking his fingers as if he's tasting powdered sugar for the first time. "These are incredible," he crows. "Incredible!"

The world-weary professor gives him a knowing look and then observes: "Finish the rest of that joint, James — you can start chewing on the box."

And who hasn't been there?

Jeff Bridges may have finally won an Academy Award for his performance in last year's Crazy Heart, but his performance as middle-aged stoner Jeff "the Dude" Lebowski was every bit as Oscar-worthy. With the likes of John Goodman, Steve Buscemi, Philip Seymour Hoffman, John Turturro and Julianne Moore in supporting roles in this standout film by the Coen brothers, Bridges floats through the movie on a foam of white Russians and a hazy cloud of pot smoke. There are a lot of great moments, but one of the best comes when Lebowski, driving along in his junker of a car and smoking a joint, takes a last drag and then flips the roach out his car window. Only the window is still up, and sparks from still-burning roach lands in his crotch. He crashes into a telephone pole (who says it's safe to drive while burning a fatty?), and eventually douses the burning number with his beer.

Craig Ferguson, who has since made a name for himself hosting a late-night talk show, co-wrote this flick, in which he stars as a pothead gardener who befriends a recently widowed woman (Brenda Blethyn in the title role) in severe financial straits. Deep in debt after her husband's death, and facing the loss of her country manor, she fends off destitution by growing pot in a greenhouse that previously held her prize-winning orchids.

One critic called this film a "Cheech and Chong movie for the art-house crowd."

There are plenty of low-key British humor-type laughs — or at least knowing smiles — to be had in this gentle smoke wisp of a film. When Blethyn finally samples some of her product, sitting on the beach, high as a cloud, she suddenly starts cracking up. Asked by Ferguson what's so damn humorous, she responds, "You're Scottish," a non-revelation revelation that tickles her funny bone to the extreme.

What's that? Weed can make you laugh at things that wouldn't otherwise be funny. Hmm. And the prohibitionists say that's a bad thing? Hmm.

It's about buds. Dale Denton (Seth Rogen) plays the mid-20s process server in an awkward relationship with a hot high school senior; he drives a hooptie-ass car, he's kind of clumsy, but we like him just enough. Saul Silver, played by James Franco (Spider-Man 1-3), is his affable pot dealer, Bud No. 2. Which brings us to our third bud: Pineapple Express, a strain of Mary Jane so rare that if a stoner were to accidentally drop a joint rolled with the stuff upon witnessing a murder, it'd be completely plausible for the bad guys to trace it back to its dealer. Thus is the plot of what became an instant-classic pot comedy about the ambiguous relationship stoners have with their "guy." But is your dealer your friend? You hang out, rip a bong, gratis, and play some video games, share YouTube clips, listen to music at abnormal volumes — always too high or too low — and just chill until maybe he's on the phone making plans for someone else to come by. But what happens when you and this dude wind up in the center of a murder-drug caper?

As we were putting this list together, we thought about Animal House, which, set in 1962, didn't have much pot-smoking. But there's a wonderful scene where an English professor (of course!) played by Donald Sutherland (ditto!) sits in a locked bathroom with two students, who are getting high for the first time. Stoned to the bone, they muse on the trippy possibility of an entire universe inhabiting an atom in a single fingernail. Jump ahead to 2010, and characters played by Meryl Streep and Alec Baldwin hide out in a bathroom during a party to hit a few tokes. Pot's no longer the evil weed of Reefer Madness days — no demonization, just a severe case of the munchies results. But when can all the smokers come out of the bathroom?