Fears of a clown — Confessions of a struggling comic 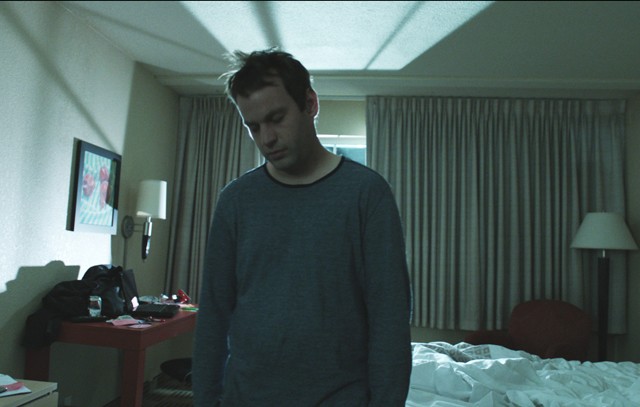 Sleepwalk With Me| B

Comedian Mike Birbiglia's style operates at such a low frequency that it probably creates mild electromagnetic pulses deep within the earth; his delivery is not just casual but borderline somnambulistic, but the sleepy tone contrasts with the sharpness and candor of his insights.

His debut feature as writer and co-director is a weirdly personal tale about career growth coinciding with relationship corrosion. It feels lifted from Birbiglia's act and, by extension, from his own life. The hushed, inward-looking and confessional nature of the material is not surprising when you consider that NPR storyteller Ira Glass co-wrote the script, and at times the voiceover narration has the intimate feel of a radio monologue.

Birbiglia plays a barely disguised version of his younger self — named Matt Pandamiglio, as if to reassure us of his panda cuddliness. Matt is a schlubby, puppy-like everydude, incapable of getting a decent haircut or of getting out of his own way. He's in a long-term relationship with a smart, silly and far-too-good-for-him beauty named Abby (a luminous Lauren Ambrose) who very patiently waits for him to figure out what to do with himself. For Matt, this means literally getting his act together, as he embarks on a faltering stand-up comedy career. His painfully slow evolution as a performer runs parallel with the stagnation of his personal life, where he perpetually drags his feet on the topic of marriage. While he steadfastly refuses to commit to Abby in reality, when he moves beyond Cookie Monster gags, and into more truthful relationship themes, he gets better, and the gigs become more plentiful. With some small level of success the opportunities for misbehavior also multiply, and during a backstage hook-up with a comely club waitress, Birbiglia turns and addresses the audience directly to remind us that we're supposed to be "on his side."

Emulating the current honest-comedy idol Louis C.K., Birbiglia is unafraid to make himself unlikable. He makes for an occasionally frustrating protagonist. You alternately want to hug and slap him.

Offstage, Matt's surplus of anxieties manifest themselves in dangerous sleepwalking episodes, where he unconsciously acts out his nightmares, such as being chased by a jackal. These interludes make for some funny, Annie Hall-like surrealist sight gags, as when Mike gorges himself on a neck pillow made of pizza, then nearly drowns in tomato sauce. But these do little to advance the narrative.

What Sleepwalk With Me excels at is accurately capturing the hidden melancholy of the struggling comedian's lifestyle: the bad gigs, low pay, endless highway miles, the humiliation and the crushing isolation of life on the road. Birbiglia is not yet a household name, but is well-liked among his peers. And he's stocked the cast with his fellow comics, including Wyatt Cenac, Kristen Schall, Marc Maron and Jessie Klein. Maybe if he'd let these funny folks do more, the film would rise beyond an amusing diversion into the hilarious mini-classic it could have been.

Of course, the whole theme is about a self-obsessed guy attempting to overcome his patent mediocrity, and the film's prolonged bouts of navel gazing are fitting — if not annoying. With his low-watt awkwardness, Birbiglia makes for an interesting screen presence, even though he's continually outclassed by the shinning Ambrose, whose warmth and intelligence make you root for better things not just for the character but the actress. Sleepwalk With Me shows tremendous promise, but, like the doomed romance at its center, it may just serve as a stepping stone for something better yet to come.