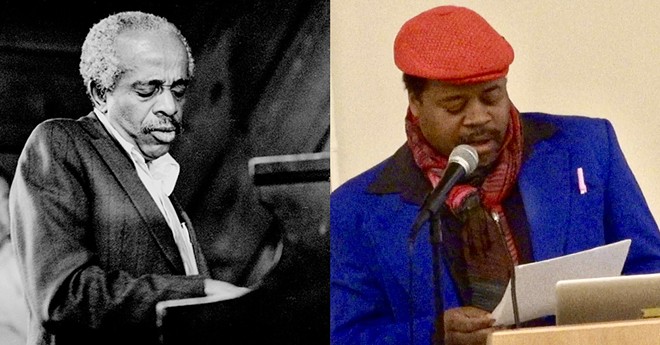 On back to back days we received notices that cultural avatar Greg Tate and iconic jazz pianist and composer Barry Harris are with the ancestors. If it’s true they are no longer with us, their contributions are remarkable and everlasting.

In one sense they represent polarities on the African American cultural spectrum, the younger Tate — reportedly in his early sixties and Harris in his early nineties — a writer who pioneered reporting and assessing the importance of hip-hop’s impact on the music continuum. His essay and later collection in Flyboy in the Buttermilk set the pace in the coverage of the breakout genre that was often dismissed as noise and inconsequential. He was as consequential as the music, and his concern to properly contextualize the music was extended by his own performances of Burnt Sugar and a founder of the Black Rock Coalition.

Harris was equally formidable in the jazz realm, where in his early years in his hometown of Detroit he was a mentor to a veritable coterie of aspiring musicians, many of whom have made their marks in the world of music, particularly as performers, teachers, and emissaries of jazz. Few pianists were as coherent and expeditious in keeping the musical tradition of Charlie Parker alive and current as Harris, and in this regard he was deemed a Jazz Master.

His students came from around the world — when he couldn’t travel to them — to get lessons in his midtown Manhattan studio, where he generously shared his matchless knowledge of music, making it even accessible for those only peripherally interested.

Both were born on the fifteenth day, Tate in October, 1957, and Harris in December, 1929. They joined the planet a generation apart but left it with a combined productive and artistic vision for future aspirants of pen and piano.

Much more will be said about them, and our pages will be among those praising and recounting their incomparable achievements.