Review: 'The Lion King' rules over an uncanny valley 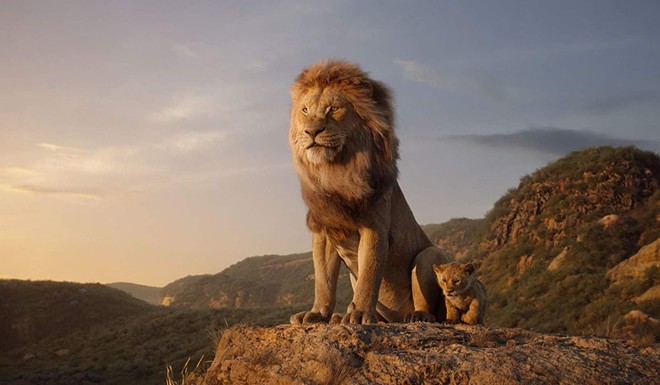 Perched high atop a bluff, the regal Mufasa (voiced by James Earl Jones) gazes down at the vast savannah below and declares that “everywhere the light touches” is under his command. Of course, the real world reach of the magic kingdom extends well beyond that: into our memories, our dreams, and deep into the far, dark corners of our imaginations yet to be colonized.

Trust that if there is one of your precious childhood memories still untouched, Disney has a detailed plan to exploit it — and based on the staggering technical achievement of this CGI remake of its beloved 1994 animated classic, The Lion King, they have more than enough ability to do so.

From the very first moment, it’s obvious that this remake has been built to dazzle and astound, with gloriously rendered visuals and Hans Zimmer’s jubilant, overpowering musical score that, at least in the Dolby stereo theater I saw it in, makes the seats rumble and shake. Less obvious is what, aside from a healthy bump in Disney's quarterly financial projections, is to be gained be revisiting the story of Simba and his animal menagerie of friends and foes.

The House of Mouse has been engaged in a furious campaign to re-imagine its expansive animated catalog into live action films, though in this case, where nary a human actor is seen, it’s a bit more difficult to see the point, aside from sheer spectacle. The lovingly, amazingly rendered CGI creatures here are photo-realistic, which is both fascinating and weirdly limiting; these beasts reside not just in Africa, but in an uncanny valley.

There is simply no way that anatomically correct big cats can ever be as facially expressive and “alive” as their hand-drawn cartoon forebears, and so despite the epic scope of director Jon Favreau’s visuals (the great Caleb Deschanel is the cinematographer, though what he “shot” is unclear), there is a huge emotional disconnect between the grandeur of the images and the impact of the storytelling.

Though it now feels ancient, the tale of The Lion King was a new fable for the '90s, though it clearly borrowed elements of Hamlet, and more egregiously and bluntly lifted huge chunks of its concept from Japanese anime master Osamu Tezuka’s 1960s series Kimba the White Lion. It feels so familiar and comforting now because at its core the story is the hero's journey, elemental to all great myths. Simba (Donald Glover) is the rightful heir to the thriving “Pride lands,” a wild expanse that is ruled by a noble family of lions, who seek to maintain balance with all living things in their domain. When their king is betrayed by his treacherous younger brother Scar (Chiwetel Ejiofor), the prince is exiled and spends years wandering the wilderness until he has grown strong and wise enough to reclaim his birthright and repair the damage caused by his uncle’s reckless reign.

The ecological message embedded here, as Mufasa gently explains is the “Circle of Life” and the renewal of all things, was topical in the Clinton years, and even more relevant now — though the metaphor of recycling does seem faintly ironic in a remake movie.

Though fairly simple, the plot is buoyed by Elton John and Tim Rice’s effervescent musical numbers, which are still entertaining even after being adapted into a hit Broadway show (and if you were a child of the '90s, or had a child since, then they are likely earworms now permanently imbedded in your skull). The craftsmanship on display here is utterly next level, but creatively the film hews so closely to its predecessor, the expense in making it seems oddly pointless.

Chances are you’ll be humming along, and smiling at the antics of goofy sidekicks Timon (Billy Eichner) and Pumbaa (Seth Rogen), but when the lights come up you may be left with a hollow echo, like a mighty roar reverberating sadly through an otherwise desolate canyon.