Best of enemies. This anti-buddy flick is a confounding muddle of insults, violence and pratfalls 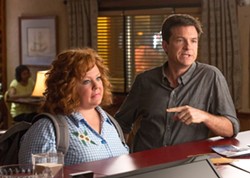 Prim and haughty vs. brash and bawdy: This is an immortal comedy pairing as indelible and comforting as PB & J or mac ’n’ cheese, a simple duality employed by teams from Abbot and Costello to Belushi and Aykroyd. The latest spin on the familiar concept pairs deadpan master Jason Bateman and fireball scene-stealer Melissa McCarthy, teamed up as rivals stuck together in a road trip and reluctant buddy action romp that is intended to remind you of Midnight Run or 48 Hours, which it does — it reminds you of how much better those classics were than this confounding muddle.

The plot involves a buzzword ripped from the headlines, then filtered through screenwriting software and copious studio notes, until it bears precious little resemblance to reality. Bateman plays a decent but perennially cautious Denver family man with the fairly unusual name of Sandy Bigelow Patterson. Can’t be too many of those running around can there? Turns out that, yes, there is, and this other Sandy is busy running around Florida racking up massive credit card debit buying a mountain of household goods and clothing, and booking spa days. Making matters worse, Sandy has left his pompous, Ayn Rand-loving boss (Jon Favreau) to become lead accountant at a startup finance firm, which now deems our man an image risk to their fledgling company. The cops are predictability unhelpful, but Sandy is given a week to track down and haul the crook back to Denver in order to clear his good name.

When he does find the culprit, her “real” name is Diana (Melissa McCarthy) and she’s a venomous little ball of lies, deception and unchecked hostility, with competing addictions to fried foods and to the mall cosmetics counter. She is by all definitions a loathsome, reprehensible little tick in vaguely human form, and when she’s not busy cheating and stealing, she’s turning on the fake waterworks in bathetic displays of awfulness. You wouldn’t want to spend 90 seconds in the company of this creature, let alone 90 minutes. Things are not improved by the presence of both a bounty hunter (Robert Patrick) and a flavorless pair of mob hit men, all looking to make Diana accountable for her reckless way. Few things kill comedy like serious injuries, yet folks here are continually being bashed over the head, punched in the throat or shot in the face. By the time a snake crawls up Bateman’s pants and bites him on the neck, the air has long escaped the balloon.

There are just enough laughs sprinkled around that it is hard to blame the hardworking leads for the movie’s dire, mirthless stretches. Bateman does what he always does; no actor has been as committed to a comedic persona since Jack Benny, and he plays almost exactly the same, droll, constantly aggravated character he worked to such great effect on Arrested Development. And if you stuck around through the outtake reel on This is 40, then you know that McCarthy is a gifted improviser, capable of stretching tangents into hilarious sidetracks. Shame, then, that too often she forced into pratfalls, belly flops, tumbling and more pratfalls. Here, McCarthy is like the female Kevin James, and her voluminous frame is bounced around more than a beach ball in the cheap seats at a Tiger, and game she takes more abuse than an NFL replacement ref. Of course in the extended scene where she has rough, violent, furniture-smashing sex with Eric Stonestreet (Modern Family), it’s the audience that feels abused.