Review: Ebony Roberts's 'The Love Prison Made and Unmade' 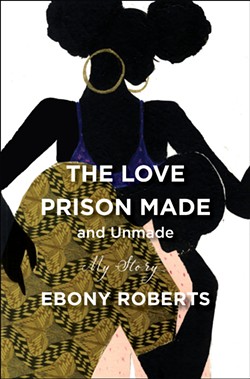 Harper One
Ebony Roberts, a native Detroiter who built a career as one of Detroit’s best-known youth advocates and community activists, has penned her memoir. The Love Prison Made and Unmade is book that details the various twists and turns of Robert’s romantic encounters that lead up to her relationshiop with Shaka Shengor, a man who was incarcareted for murder when Roberts met him.

The book starts off with puppy love stories detailing how Roberts’s parents met at 14 and 15. The nostalgia takes a sharp turn as Robert’s recounts her father’s abusive tendencies toward her mother. This was in the 1970s, when the domestic violence laws were still climbing up the judicial ladder and what a man did to his wife was considered “his business.”

As Roberts grew up she was able to make strides academically (she holds a Ph.D. from Michigan State University in Educational Psychology), but her decision making when it came to dating was never good. Her heart sought fairytale romance, but all she seemed to flock to were unfaithful men, verbally abusive men, and men that she poured more effort into than they poured into her. She met Senghor through a prison outreach program and a relationship blossomed, even though he was incarcerated.

Some of the most heartfelt writing in the book details their journey into falling in love, Shaka’s litany of prison transfers, and the clinging to hope that he would be paroled. Once Senghor was released, the journey intensified, but there would be no fairytale happy ending.

The Love Prison Made and Unmade is love story, a Detroit story, a story about hope, forgiveness, and believing anything is possible.