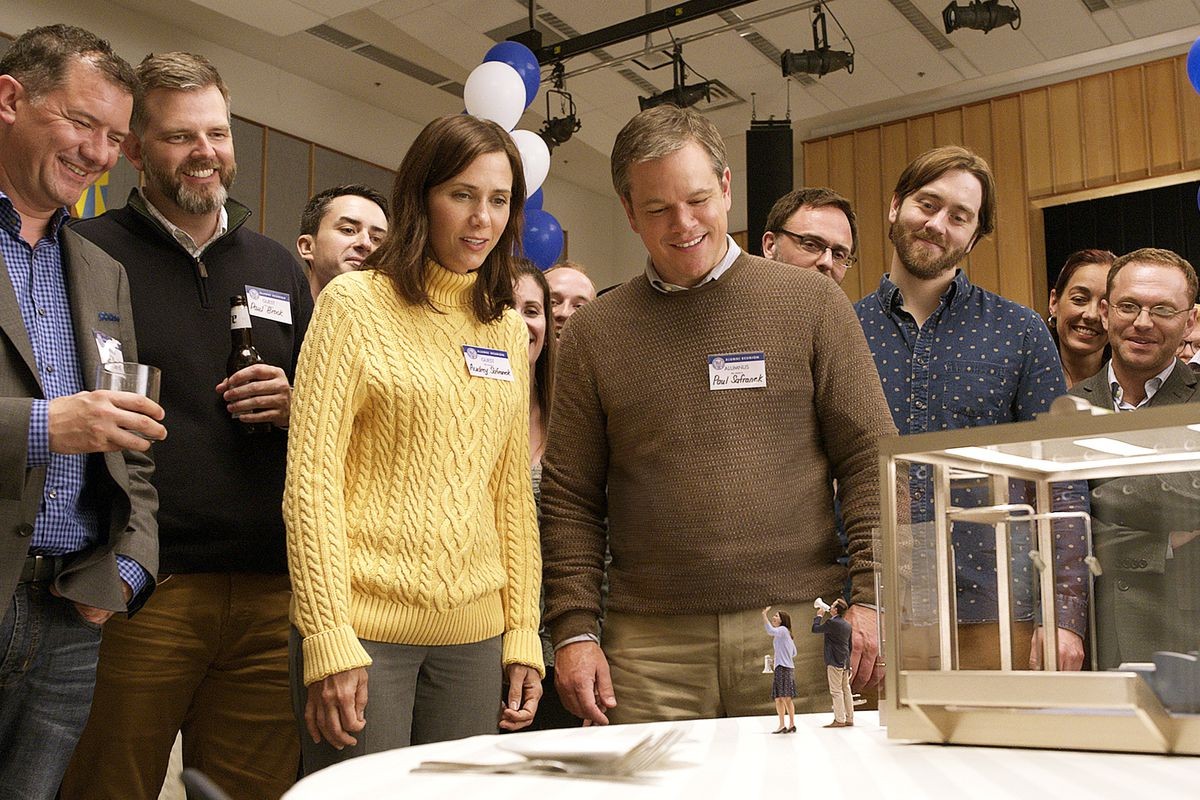 There are too many people on planet Earth, and we are having a devastating impact on the planetary environment. What if, instead of reducing the number of people, we just... reduced the people? This is the premise of Alexander Payne's (Nebraska, The Descendants) first foray into science fiction, and it is absolutely stupendous: smart, funny, poignant, a true original. I love this movie: It moved me in ways I wasn't expecting and craved more of. It's one of the year's very best films.

An air of calm academia surrounds the announcement, which opens the film, that the "Human Scale & Sustainability Project" has discovered a way to shrink humans down to about five inches tall, with no side effects whatsoever. You just get small. The scientists are even Norwegian, for Pete's tiny sake, the very model of unruffled Scandinavian reasonableness: Their technology isn't flashy, and their presentation comes with the additional news that a small colony of small people have been living serenely in a sort of hippie commune in a small patch of Norwegian forest. This ain't no dystopia, and this ain't no sleek Star Trek future, either. It's just humanity, writ small, and presented with a slightly comedic whiff of masstige chic, like you might pick up a new downsized lifestyle at Ikea.

A few years later, the technology has spread, and small is big: Lots of people are "immigrating" to an ever-burgeoning — in a tiny way — downsized world. Enter Omaha nobodies Paul and Audrey Safranek (Matt Damon and Kristen Wiig), who are thinking about solving their financial troubles by downsizing. Turns out a very, er, small pot of savings goes a very long way when you're only five inches tall; materials for building your McMansion are cheap when it's the size of a dollhouse. They settle on Leisureland, in the American Southwest, a whole city for the downsized sitting in the footprint of a shopping mall. It's a gated and netted community (to keep out the birds and insects that could be a problem when you're meal-sized to a crow). It's khakis and grande double macchiatos, call-center jobs and noisy neighbors, only in miniature. It's somehow pathetic and exciting at the same time, the latest bestselling self-help nonsense — save the planet while living like a king! — that's also a grand adventure, colonizing a new world you didn't even notice before, and which turns out to be exactly like the old one.

Downsizing is a science-fiction movie for people who don't care for science fiction. It's a satire, of course, on the hamster wheel of modern middle-class Western existence, and (in)conspicuous consumption, and how you can never escape yourself no matter how far you run, and a lot more. I don't want to say too much; Payne and his co-writer and frequent collaborator Jim Taylor take their concept to the very edges of extrapolation, and Downsizing becomes a thrilling odyssey of ideas that is very rare onscreen, and all the more thrilling the less you know about them in advance. We meet fascinating people such as Dusan Mirkovic (Christoph Waltz), a slick hustler who's making a tidy tiny living in the new, ahem, economy of small scale, and Ngoc Lan Tran (a movie-stealing breakout performance by Hong Chau), who is our entree into the dark side of downsizing (you knew there would be one).

There's a profundity to what is silly on the surface in Downsizing — it portrays a poignant banality to human frailty that becomes outsized as people get small. The sequence in which we follow Paul through the gender-segregated downsizing procedure made me laugh and cry at the same time, at the ridiculous imagery of newly tiny naked men being lifted with utmost tenderness on spatulas by normal-size nurses for the final shift to the small world; the ding of the downsizing machine as it completed its process sounded like that of a microwave, and somehow only emphasized the new vulnerability of these tiny people. And yet, as we see, too, the break with the past that the "permanent and irreversible" downsizing procedure represents can lead to a fresh eye on the world and its people only if you actively seek it out. Expanding your perspective is not something a machine can do for you: You have to actively seek it out, even if your horizons are suddenly a lot closer.