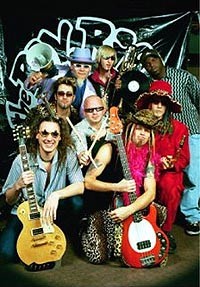 Photo / Rev. Right-Time
Rev. Right-Time & the 1st Cuzins of Funk
Let your hair down and soak up the fresh funk from this motley crew of groove eccentrics. It would be hard not to, what with their don't-hold-back scratches, horn wails, wah-wah guitar whines and slip-slop-slap, you-know-this-guy's-dancin' bass coming at you from every angle. Rev. Right-Time & the 1st Cuzins of Funk intertwine elements of rock, gospel, hip-hop and soul into a chunky funky stew. The group has sold more than 20,000 records independently through live touring over the past three years and signed a demo deal with Atlantic Records in 1999. Recently, the group recorded five songs with producer Nile Rodgers. Now they're gearing up for the Big Bottom Shakedown tour, which features Rev. Right-Time and four other Midwestern funk groups.