Planting seeds on Detroit’s east side

How gardens can be dangerous 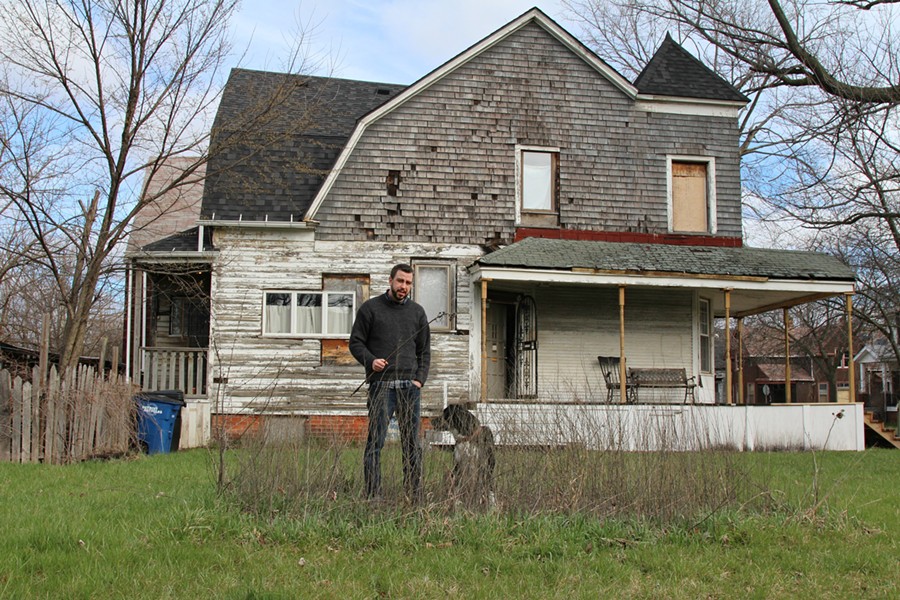 Reprinted from A $500 House: Rebuilding an Abandoned Home and an American City by Drew Philp. With permission of the publisher, Scribner. All rights reserved.

Spring had returned as it always does, the bright, generous whirling of the sun and the rain playing a symphony on the green things of the earth. The slate gray skies of winter had been banished, and the sounds of the birds and insects were back with the month of May. After living another winter nearly without heat the first yellow-warm day had the effect on the mind that taking a shower after a long time in the woods has on the body. It was time to do my own encouraging of the green things of the earth and plant a garden. I loaded my hoe and rake into the red wheelbarrow and stepped outside into the neighborhood.

My big project for the summer was the chimney. It was also time to meet the neighbors, but I was feeling less sure about that. Part of the reason the winter had been so tough was because I was still trying to find my place in everything. Constitutionally shy, I needed to force myself to meet the people that lived around me, to not slip in and out of my house. I needed to slowly and respectfully add my voice to the chorus of what was an already functioning community. I figured my best bet was with a garden.

I had started the soil the year before from leaves I had collected, spent brewing grains from the bar I frequented, and compost from Forestdale. I had piled it in square layers like lasagna in the center of my lots and bordered the bed with logs I had accumulated clearing my backyard. Out in the open I felt self-conscious in front of my new neighbors, unprotected by the walls of my house. You couldn't miss me, there was nothing to hide behind. "Here I am."

I grabbed the hoe and began turning the soil, a white guy in the middle of Detroit with my feet in the dirt, breaking up big loamy chunks that had compressed like diamonds over the winter. I hoed until my back and arms had beaded with sweat and the muscles felt loose and warm. I folded my hands over the handle in repose and saw Mrs. Terry, the neighbor from behind me, beckoning. I also saw a thunderstorm brewing.

I walked over to chat with Mrs. Terry for a moment, and she casually invited me to a Mother's Day party they would be throwing in their yard. I kept an eye on the storm. I figured she was just being friendly and didn't really want me to show up, but I said something affirmative. I could see the front pushing against the clear blue of the day, the sky divided in two.

I thanked her, feeling a bit better about my place in the neighborhood, but told her I needed to get the crops in before it rained. I had seen the news earlier but only just remembered this had been in the forecast, the bounty of the day encouraging my forgetting. The thunder was here whether I liked it or not, and I was going to have to work fast if I wanted to get everything in the ground. I wasn't sure I would. I waved goodbye to Mrs. Terry and went back to hoeing with increased vigor.

I worked quickly. Gardens had become the metaphor for what Detroit could be; the cold steel, captured explosions, and CO2 of automobiles were the past whether we liked it or not. Gardens represented life: growing, spreading, healing, vegetables and fruit working in harmony, a community in the dirt but never dirty. At least it represented what I wanted the new Detroit to be. The wooden handle of the hoe, smoothed by years of work, felt easy in my hands, like I might beat the storm.

Like so much else, the U.S. food system has failed Detroit spectacularly. Much of the city is considered a "food desert," where access to fresh fruits and vegetables is nearly nonexistent due to transportation and economic challenges. It's no secret that poverty and extra weight overlap in complicated ways. Detroit is often the most obese city in the nation from year to year. A neighbor I recognized drove by. I waved. He gave me a nod.

When the row had been hoed, I dropped to my knees with an open package of mustard green seeds. The storm was growing closer. I drilled holes in the soil with my forefinger for the fetal greens, measuring the spacing with a yardstick.

Drill the holes, drop in the seeds, move the stick. Don't go too fast or you'll mess up.

But gardens in Detroit didn't just begin as a healthy alternative to the junk sold at liquor stores. It was a way to meet your neighbors, brighten the neighborhood, and reclaim abandoned land for the community. Gardens in Detroit grew relationships alongside vegetables. This was the point, and this was why I was outside with my knees in the dirt. Getting outside leads to meeting the neighbors, which leads to community groups, which leads to safer streets and cleaner lots, which leads to self-sufficiency and healthy communities. As Grace Lee Boggs once wrote, "Building community is to the collective as spiritual practice is to the individual."

I moved on to carefully dislodging purple cabbages from the plastic cups in which they'd spent the first part of their lives. I buried them in the soil, patting each root structure, with faith that they would grow.

Detroit has the space, infrastructure, and knowledge to grow much of the food we need for the city, inside the city itself. Keep Growing Detroit, the nonprofit that supplied me with these transplants, has estimated there are at least 20,000 urban farmers and gardeners in the city. There are an estimated 40 square miles of vacant land in Detroit, enough to fit San Francisco inside just what's been abandoned. Michael Hamm of Michigan State University calculated Detroit could grow three-quarters of its vegetables and more than half its fruit right here.

Stick in a plant, cover it with soil. There is little in an acorn to suggest it will become an oak tree.

Detroit has the space, infrastructure, and knowledge to grow much of the food we need for the city, inside the city itself.

What would it do to Detroit if, instead of subsidizing casinos and sports stadiums, we used that money to plant thousands of fruit trees around the city free for anyone to eat from?

What if they used that money to subsidize the building of windmills, solar panels, and geothermal heat and installed it in the city itself?

If instead of demolishing houses outright they surgically dismantled them using the materials to build more housing stock?

Both the temperature and the atmospheric pressure had dropped and I could feel the electricity in the air. The dog began to sniff, his hackles like a porcupine. The wind picking up, blowing the dog's fur in beautiful whorls, propelling the neighborhood trash like tumbleweed. I was so lost in the approaching storm and the work that I also lost my fear and self-consciousness in the neighborhood. I uncovered an earthworm and used a precious few moments before the rain to study it.

Urban farming and ideas like this begin to remove Detroit and cities like it from dependence on the global oil system and reliance on nonrenewable resources. Biking tomatoes down the street uses a whole lot less gasoline than trucking them in from Mexico.

This makes gardens dangerous. They are the zygote of an idea that can spread and grow and multiply into a worldview. They can take us from "theirs" to "ours." They can take us from an abandoned plot of land owned by a bank to a garden owned in community. From a foreclosed home to housing for the needy. From city blocks left for dead to communities without consumers.

The last to go in was the squash. I gently placed them in the dirt, careful not to break their delicate tendrils. The storm was upon us.

Gardens are dangerous because urban farms and gardens are but one example, and like a mathematical theorem we can apply the principal of self-sufficiency to the other necessities of life: geothermal heat, electricity from the wind and sun, mass transit.

The first drum of thunder. The rain had begun. It was wetting my T-shirt and the dog began to howl. Six more plants to get in the ground. Maybe I'd make it.

Our planet is going to die if we cannot find a way to live differently and solve climate change.

Four more plants. Capitalism is based on limitless growth in a finite world.

Nature's currency is life, and is cyclical.

The two will eventually become incompatible, and we are beginning to see the result with climate change.

I started with a garden.

I was soaking wet and the dog was rolling in the newly forming mud. It was pouring, the crack of thunder right behind me. I loaded my tools in the wheelbarrow and headed back to the front porch. Gratiot leaped up out of the rain. He shook the water from his glistening coat and I sat with him cross-legged under the eaves and watched the tempest. It was one of those great Midwestern boomers that make it understandable why so many in the middle of America believe in an angry and powerful god. Lightning pounded the sky and the thunder opened it and the water dripping onto the porch from the gutterless roof crept ever closer to my feet. I was unafraid and unashamed. If we were going to do this we would have to get to know our neighbors.