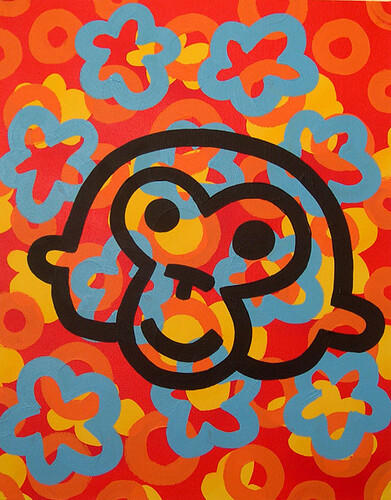 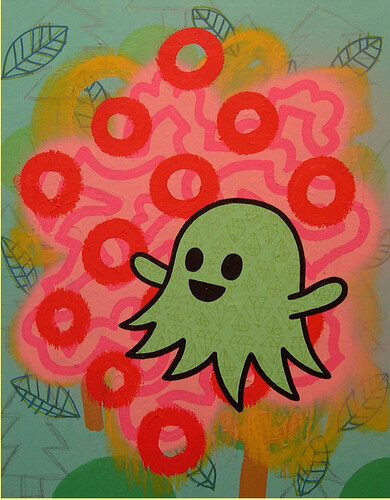 What’s that from? Damn! I’m experiencing a total meltdown of my brain. I’m closing my eyes trying to think of where that wretched song is from and all I can see is Danny Bonaduce smiling ear to ear all hyped-up on whatever it is he’s hyped on and

and I want to punch him in the face.

Nah — I’m looking at the work of Hamtramck-based artist Carl B. Oxley III and it’s like taking some sort of anti-anger pill or something. It’s chilling me out and making me feel

goofy (a word you hear more in my native Canada then you do ‘round these parts. So goofy in fact that I’m starting to believe that if there was a soundtrack for Oxley’s show tonight at the Detroit Repertory Theatre you’d hear the track — or some trip-hop remix of it — at least a couple times.

What was that show?

More than anything though, it’s all about fun and happiness and everything that TV shows from my youth, like Romper Room, were all about. 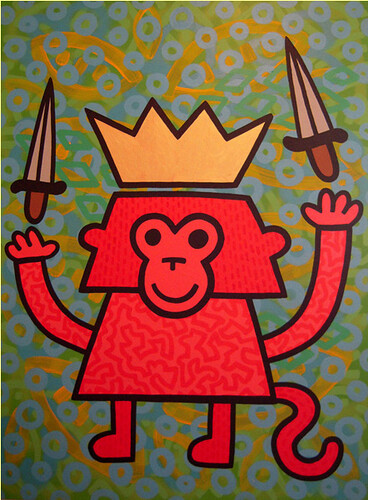 The Partridge Family! They sing that tune, right?

Yeah, never saw it, but I once heard once that David Cassidy knew all Hendrix’s riffs. Actually, I think Cassidy said on his own E! True Hollywood Stories. Why was I watching? Mind your biz. Anyway, I don't buy it. Not for a second. Dude's got no soul.

But Oxley's got tons of it!