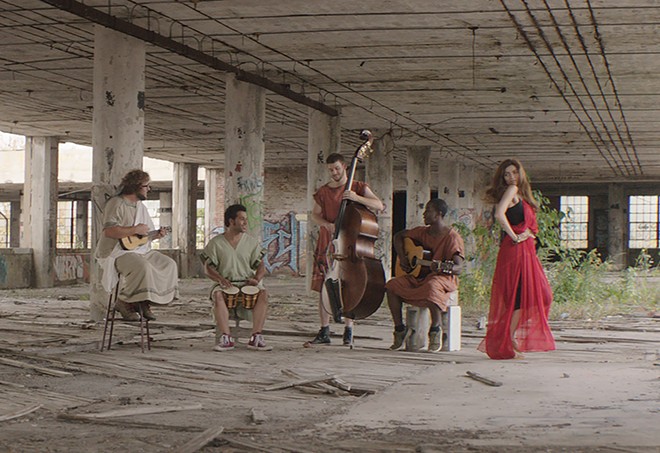 Despite its bawdy, sex-positive tone, temporal pastiche of a setting (Rome under Augustus meets present-day Detroit), and wide-ranging location shooting, Ovid and the Art of Love feels wedded to convention. Roughly mashing the biography, texts, and habitat of the popular poet with contemporary architecture, music cues, and cultural signifiers, Esmé von Hoffman's new feature (she both wrote and directed) proves an energetic scramble of adapted fragments and textures. While channeling the batty, atemporal energy both of Chi-Raq's restaging of Greek comedy and Sorry to Bother You's dystopic future-present, Ovid's an off-balance mix of experimental drives and conventional structures that feels considerably less controlled. Meshing literary adaptation, biopic, and romantic-comedy tropes with coming-of-age ones, it borrows more from its Detroit setting than it ever seems to give it.

Ovid opens with a frame: Jamal (DaJuan Cook Jr.), a reserved grade-school kid, assigned an Ovid reader, wanders about Detroit. Drifting from vacant lots through libraries and parking structures, he pauses intermittently to read the book and project for us his interpretation of what it contains; these subjective images comprise most of the film.

Treating the boy's Ovid (an earnest, often dazed Corbin Bleu) as the film's protagonist, von Hoffman's story follows his progression not only from no-name aspirant to oratory-literary sensation — but from awkward suitor to magnetic rake. Citing Ovid's Ars Amatoria (The Art of Love), the story, like 8 Mile and plenty of Hollywood movies, pairs romantic and artistic success together, correlating confidence and self-actualization — pretty fairly — with the admiration of others. In some way it's a meritocratic fantasy; after some pratfalls and pitiful flirtations, Ovid finds fame by channeling his learned romantic lessons (through largely offscreen labors) into a transgressive popular text. By speaking truth about human romance in what feel roughly like modern open-mics, he gains celebrity in the film's small Rome and becomes coveted by women and admired by men throughout the empire. In doing so, however, he also walks a knife's edge between popular fame and institutional notoriety, risking exile and suppression by celebrating freer forms of romance, always between men and women.

What that focus means in the context of the frame — both of contemporary Detroit and the boy's reading — is rather hazy. Though the kid looks about 10, much of the film's story revolves around sex and romance, following Ovid's courtship of numerous women before and after his rise to stardom. Though hints of a grade-school crush are intimated in Ovid's opening minutes, are we to believe the boy's really seeing the book in the way this story is directed, with Ovid as a kind of model? If so, then his fantasies are of shacking up with initially reluctant, often prominent women who seem roughly interchangeable, chiding him for his clumsy advances before giving over or taking interest once he attains celebrity. While children do harbor a kind of latent romanticism, sexuality, and desire, the film never paints its lead clearly as anything but a viewer surrogate — and these fantasies seem at least adolescent, and quite precocious. As a result, it's hard to know a lens through which to see the hybrid tale at Ovid's center.

The film's image of Detroit has more legs; Christopher Hohman's art direction positions figures in tunics and flowing togas next to locals in denim jackets, with picnics tables and repurposed lots, placing the film in something close to the city we know, its collisions of history and modernity bearing some true connection to urban life. Cafes, modern houses, and downtown buildings relieve the production of a need to build or heavily decorate most all its sets, but feel also like community theater sets, sparsely populated and minimally furnished, enhancing an air of knowing falseness. Geoff George's photography (he previously shot parts of locally set Only Lovers Left Alive) frames things a bit tightly, making shifts between the film's many locations geographically confusing, a source of both engagement and distraction. His images, too, look colored in post-production into bright, saturated hues that further leaven the film's coyly distanced, near-camp tone (embodied most of all in its taunting, slyly imperious women).

The overall effect of this pastiche does accomplish something; it demonstrates the manner that, in reading, we're forced to meet a text between where it's from — or what it's depicting — and the place we sit or stand. The blend ends up being, despite the film's halting acting, unsteady construction, and familiar, repetitious scenes of flirtation, pratfall, and performance, enough to give this feature life — if not quite enough of it for its nearly two-hour length. Gesturing at Detroit's political realities and orbiting its racial ones, Ovid shows us more than it's equipped to properly address. Reaching wide as it does — but on unsteady footing — it never quite finds a center.