Now Michigan is being invaded by pelicans 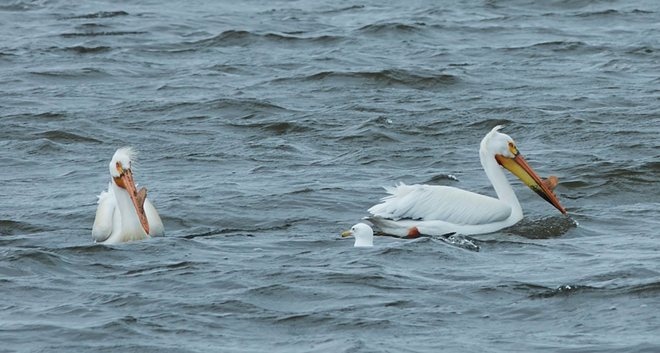 Similar to this past winter's arctic snowy owl invasion, this spring has seen an influx of another unusual bird for Michigan: the American White Pelican.

According to the birdwatchers over at eBird.com, pelicans have been spotted in Michigan over the month of May. The large-beaked birds have been primarily spotted in the Pointe Mouillee State Game area in Monroe County, though there have also been sightings in Ypsilanti and Farmington Hills.

The forces that brought the pelicans to Michigan are the same as those that brought the snowy owls late last year: the birds' growing population have forced them to expand their breeding range. American White Pelicans typically breed further inland in North American's Great Plains, and spend winters on the Pacific and Gulf of Mexico coasts. It's not unusual for them to be spotted near Lake Michigan, but it is unusual for them to be spotted this far east.

Below are some photos captured by birdwatchers showing the pelicans in Michigan. Keep your peepers peeled!