More noir: This year’s fest as a return to basics, with double features of films from the 1930s-50s 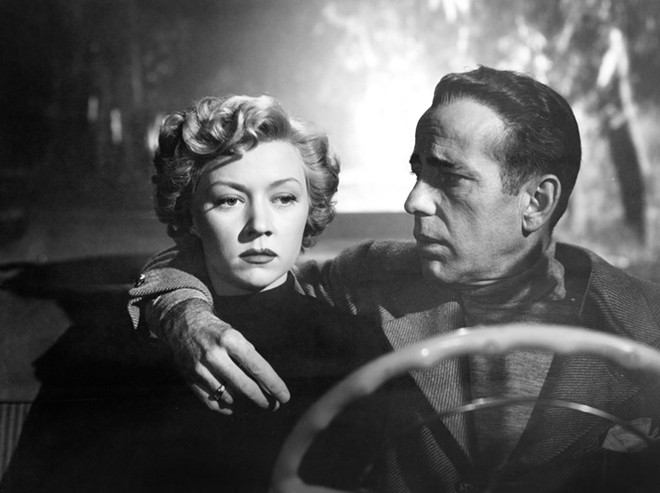 Courtesy photo
In a Lonely Place is one of the films to be screened at this year’s Noir City film festival.

As local cinemas have closed, moved, or been knocked down, each one still standing has come to seem more precious. Spaces to see movies within Detroit are few in number, and ones to see repertory screenings of older films count even fewer among their ranks. Rarer still are chances to see new or older works on film prints, a service the meticulously restored Redford Theatre is offering with its fifth and newest edition of the Noir City film festival, enriching an already packed slate of double features running this Friday through Sunday.

With selections chosen by local programmer, critic, and Detroit Free Press alum John Monaghan and Turner Classic Movies Noir Alley showcase host Eddie Muller, the coveted festival brings an array of eight classic films organized in double features to audiences in a range of cities each year. While past selections have sometimes been programmed around themes — such as neo-noir, a certain decade, or international works — Monaghan describes this year’s fest as a return to basics, pairing better- and lesser-known films from the 1930s-50s in a way that encourages a dialogue between them. Regardless of what they’ve programmed, though, Monaghan says the festival’s drawn a reliable crowd — one often broader than the Redford’s perennial audience, and not just from metro Detroit or even Michigan.

“We've got the people that might come from other states, and then we get a fair amount of people from Toledo — because it’s easier to come here than it is to the Chicago festival, which just happened last month,” says Monaghan of the fest’s ability to draw crowds. “There are a lot of younger people that maybe have never been to the Redford but know about film noir, then there's those people that are really into Turner Classic Movies, and really into what Muller does on the show – you know, they've kind of come to see him.”

With a demeanor in introducing, discussing and presenting films that skews “barroom not classroom” (his words), Muller’s ability to advocate for the works shown has proven rather singular.

“I think what has happened is that with Eddie being on TCM, it has broadened the scope [of the festival] and broadened awareness of the Film Noir Foundation,” says Muller’s colleague Daryl Sparks, promotional director of the close-knit Film Noir Foundation, the festival’s parent organization which Muller founded. “When he talks about a film or the industry, it’s very conversational — and that’s very engaging… But people wouldn’t go if they didn’t like the films, right? It’s a combination of things.”

However, after this article was published, the Redford Theatre announced Muller would not be able to attend the festival this year due to health issues.

“I greatly regret not being able to return to the Redford this month, to enjoy being with terrific fans for a long weekend of noir,” Muller said in a statement posted on the Redford Theatre Facebook page. “Some recent health issues hit me out of the blue, and while not life-threatening, doctors have advised me not to push it and to avoid traveling for a while. Sadly, I have reached the age where I listen to doctors and heed their counsel. I hope everyone enjoys the program John Monaghan and I assembled, and I promise I'll be back next time to enjoy another great lineup of films in this wonderful venue.”

The Redford Theatre added, “The Redford family wishes Eddie Muller the speediest of recoveries as we look forward to his return to Detroit next year.” (A Saturday VIP reception has been canceled, and the theater is offering a $10 refund for weekend passholders who request it when picking up their lanyard.)

Whatever the contributing factors, Noir City’s managed to cultivate a devoted following, totalling some 20 years of screenings thus far. Its success, too, has done more than just boost the festival’s geographic reach or longevity; it’s also aided the Film Noir Foundation in giving a range of films a second life. Thanks to an ongoing collaboration with UCLA’s Film and Television Archive, works that might have been permanently lost get a chance to be widely seen. Many, like last year’s wryly comic The Argyle Secrets, play Noir City fests around the country, including this weekend’s in Detroit.

That’s in conjunction, though, with a sprawling series of films demonstrative of what the genre could achieve, both in its moment and for viewers to this day. And it’s a combination that Monaghan shows no shortage of enthusiasm for, especially given the opportunity to show much of the work on celluloid with the Redford’s carbon arc projectors. Unusual even for spaces that screen movies from physical formats, the technology shoots light without a traditional bulb, giving each print a signature look and sense of life, and making each screening a true event.

“I really wanted to show In a Lonely Place, because that’s a personal favorite movie. And I’m very surprised [Eddie] hasn't shown it yet,” says Monaghan, speaking to the virtues of the visually sumptuous, intimate and cynical work by Nicholas Ray, best known for directing Rebel Without a Cause. “And then I wanted to show Nightmare Alley because of the remake, because I thought people would be interested to compare the ’40s one to last year’s. And then I really wanted to show T-Men because of the Detroit connection… that one’s especially interesting because it’s got Detroit footage in it.“

For Sparks, who counts In a Lonely Place as a favorite, too, the genre’s enduring appeal stems from a handful of factors. Noting their visual style, contemporary moral shadings, and psychological depth, there’s plenty of reason for audiences to find Noir City – and the genre itself – inviting.

“There's something very attractive about the way those stories are told,” she says. “Some people are attracted to the way the film is made… A lot of these were made on a very shoestring budget — not all of them, but quite a few. So they [the filmmakers] were forced to be creative.”

To Monaghan as a programmer, the wide reach of the genre makes it reliably exciting from a programming standpoint — on top of everything else.

“What’s cool about film noirs is that you’re always discovering new titles because there’s so many of them out there,” he says. “The Film Noir Foundation has been really seminal in bringing to light some of these movies that have fallen out of copyright, making really nice prints of them, and finding complete versions of things… So there’s always things to discover. I’m constantly discovering new favorite films, through Eddie’s show on television, and through the things that he brings to Noir City.”

But this abundance also leaves plenty to do – and a range of possibilities that Monaghan suspects could sustain the festival for decades to come.

“Realize we never repeat titles — all the titles we show we haven’t shown before,” he remarks. “There’s so many titles we could do this for another twenty years now. You know, I tell Eddie we’ve never shown a Fritz Lang. We have not shown a single film [of his]. To me, he’s one of the two or three greatest film noir directors. So, boy… we’ve got a lot to cover.”

This story was updated with a statement from the Redford Theatre regarding Muller’s cancelation.