Without a ride to gigs, one Detroiter's puppet show remains obscure 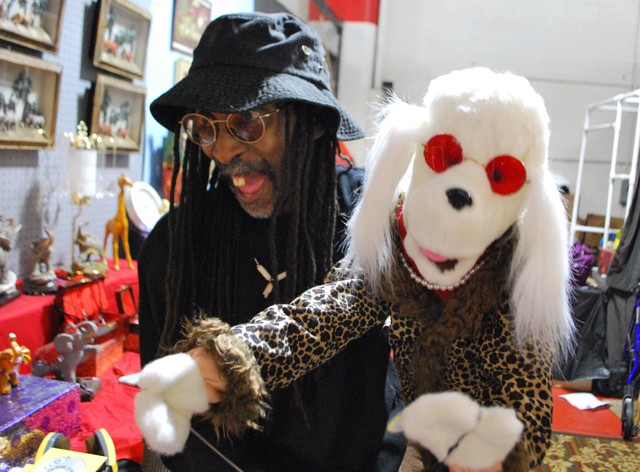 Detroitblogger John
Darrell Banks lip-syncing with his puppet Diamond inside his booth.

His booth is dark and locked tight. It's early afternoon inside the Russell Industrial Center's weekend bazaar, and Darrell Banks is late for work. Behind the black metal gate are his dollar store elephants, his quaint figurines, his little bags of incense and his hand puppets, all unreachable by anyone who might wander past, because the store is still closed.

Banks, 59, is the proprietor behind Banks Enterprise Gift Emporium, one of dozens of small and side businesses renting space inside the cavernous industrial complex. He pays just under $80 a week in rent to sell his odd assortment of knickknacks from inside a fenced-in rectangular space among the market's perfume makers, baseball hat manufacturers, used CD salesmen and a taco booth by the door.

But he's not here yet, and the bazaar has been open for hours. Though he lives in the nearby New Center area, in a senior apartment complex, he has no car and depends on others for rides to work. He could take the bus, but he has difficulty walking to and from stops. Sometimes he relies on his brother, who sometimes proves unreliable. So he often arrives places late or not at all.

It's hard enough to keep a small business like his alive, and Banks already faces more challenges than most. He can't afford to advertise, so his sales come from shoppers who happen to wander past when he's present. He plans to make fliers and create a website, but he hasn't gotten to that yet. His stock consists of things most people don't have a pressing need for.

And making all that worse is the persistent problem of getting to work. "I have a transportation situation," he says.

With all those factors working against him, he needed to come up with something to draw customers during the few hours he's actually here.

One day he picked up one of his hand puppets and made it lip-sync to some old soul songs playing from a little stereo. And soon, the people who used to walk past his table of elephants and giraffes were now standing before his booth, transfixed by a puppet show unlike any other.

"I was surprised, matter of fact," he says of the reaction. "From the very first time that I started showing them."

Banks never thought much about puppets. He saw some on TV when he was growing up, but he really didn't care for them.

After retiring a decade ago from the Michigan Department of Transportation, Banks grew bored and wanted to start a side business to give him something to do. He first set up shop at the Michigan Mart inside the State Fair, then at the Russell, selling an odd assortment of items loosely connected by an African theme.

A man in a neighboring booth gave him a puppet as a gift, and Banks added several more to his stock when he saw people gravitate toward it. Then, one day, he took one down from a shelf and practiced animating it.

"I just started playing with it and then realized, damn, it kind of looked real," he says. He did online research on the history of puppets, took a quick course in puppetry, asked others for tips. But most of his thoroughly unique act came from his own imagination.

"I came to realize doing puppetry is your own personal craft of how you make it, and I decided to develop it. It's just evolution."

His puppets don't delight the audience with a skit, or engage children with questions and stories. Apart from a few spare words to open the show, the puppets simply lip-sync to old soul songs.

He'd read that in traditional Japanese puppetry the puppeteers are hidden or shrouded, to avoid the audience being distracted by the performer, so he started doing shows with a black shroud draped over his head.

But the cloth is fairly transparent, and he gets so enthused by the puppets' liveliness that he can't help but mouth a song's words along with them. So the show consists of a singing puppet and a puppeteer whose lip-syncing is clearly visible through his shroud. It's the opposite of ventriloquism.

His sincere delight and beaming smile, though, are just as much a part of the show. Because no matter who's in the audience, chances are Banks is the one in the room most delighted by the singing puppet. "I just like them," he says, smiling. "Just seeing something that's not real, an inanimate object, just all of a sudden coming alive. Sometimes they amaze me."

After a while he built a small, black-curtained stage at the back of his booth where he puts on performances whenever someone requests one, for the absurdly low rate of $2 for 15 minutes. A small, old TV at the front of his booth loops grainy videos of his puppet shows, shot on an old VHS camcorder, in hopes of drawing the curious into asking for a live performance.

Since he began a year ago, almost all his shows have been confined to his little space, seen only by the few who chanced upon it. But then someone passing his booth saw his act and invited him to be part of a Halloween show at Bert's Warehouse in Eastern Market. This little hobby he'd developed in quiet moments had grown remarkable enough to draw an invitation to perform in public. And Banks couldn't wait.

That Saturday, he gathered his puppets, dismantled his stage and packed his black shroud. And he did it all for nothing. He never made it to the show because his ride fell through.

"I don't even want to talk about it," he says the next day, shaking his head. Then, as if to sum up what happened in a few words, he adds, "Oh, man. My brother."

Banks needs rides to get around town because he's been handicapped most of his life. He's got ankylosing spondylitis, which he refers to as Bamboo Spine. It's an arthritic condition that causes the spine's vertebrae to eventually fuse together into a solid, single bone that leaves the body contorted and difficult to maneuver.

He can barely get around his small booth, let alone from a bus stop to his destination. He can't drive a car, though for a time he figured out how to do so using wooden canes to reach the pedals on the floor, but he really needs a vehicle with hand controls. So despite his ambition, despite his commitments and appointments, he's at the mercy of others if he needs to get someplace.

Banks talks about all this as he sits on a stool inside his booth on a chilly autumn afternoon. His walker stands nearby, his cane stays in his hand. The crowd is thin today at the bazaar, and apart from a few hellos from others who work here, nobody's shopping in his booth.

He leans over and picks up a puppet, a white-haired dog wearing a leopard print costume and red sunglasses that he named Diamond. The dog starts rapping along with a Queen Latifah CD. And Banks breaks into his toothy grin again.

Barely a minute passes before several people have gathered, staring with amusement. They can't help but smile or chuckle, because the sight of a fuzzy rapping dog is genuinely funny. The dog beckons the crowd, strokes its own hair, puts its hand on its heart, waves its arms wildly. For a few moments, it's as if the puppet gives him a chance to express the movements that his own body can't, and the delight on his face steals the show.

And when it ends, his audience melts away. Nobody pays him for the entertainment, and nobody buys anything. Banks goes back to waiting quietly as the TV flickers and the puppet goes back to being lifeless on a shelf.

A few days later, despite missing his gig the weekend before, he was invited for the next week's Halloween show at Bert's. And Saturday is here! He was planning to be there by 10 a.m. to set up for the noon show, he says excitedly. This time, he insists, one of the organizers has promised to pick him up and take him there.

Ten o'clock comes. So does 11. And Banks is still at home, waiting for a ride that would never come. He leaves voicemails and waits. Nothing. By mid-afternoon, he's given up.

"She never did show up," he says, his voice dispirited at the end of another day's defeat. "I called her and it just seemed like she had a lot on her plate."

Now he missed both the Halloween party and the weekend bazaar that day. "I'm starting to see that I won't be able to do outside performances," he says, forlornly. "When you have a handicap and you've had one all your life you begin to learn certain things. You begin to learn how to have patience and how to do things more efficiently, so when things just don't go, you don't let it bother you. You can't let it frustrate you. You have to squash it and then just move on."

For now, he says, he'll just focus on making DVDs of his performances until someone else comes along and decides that his puppet show is worth being shown elsewhere.

Until then, his puppets come to life only in the shadows of his dimly lit booth, animated at whim, unseen by all but those few who pass by when there happens to be a spontaneous lip-sync-a-long. At least, Banks says in self-consolation, he can put on a performance or two at the bazaar the following day, and draw some appreciative smiles, maybe even a paying customer.

All he has to do is find a ride there.