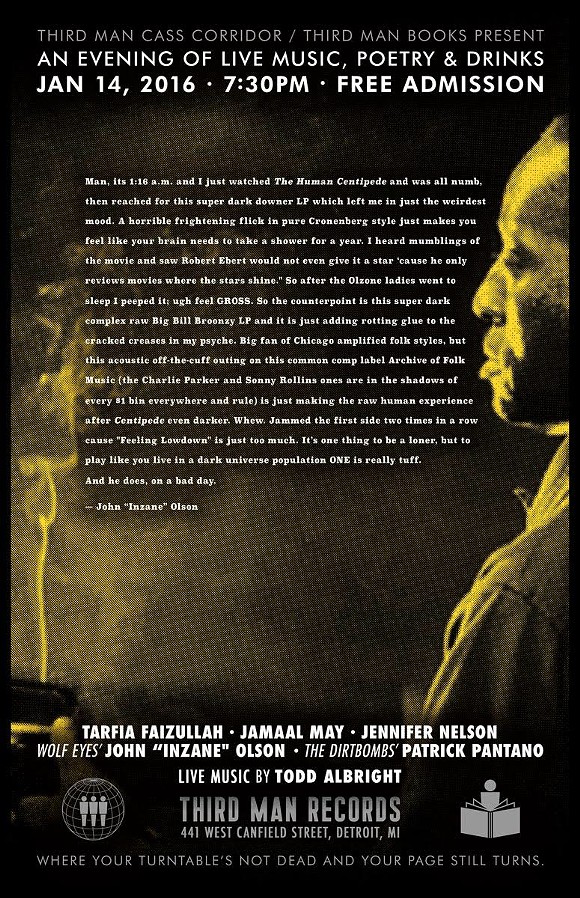 We're extra stoked about this varied and fun event. We'll be writing a proper preview of it in next week's paper, but for now just wanted to be sure you had the info, so yes this is just a cut and paste direct from Third Man. We're particularly excited about the readings by Jen Nelson, whose book on Ugly Duckling is killer, and those John Olson reviews are hilarious it'll be fun to see him read from them.

The thing is free, it starts early, and even if the weather is crap you have no excuse for not attending. None!

Join Third Man Books, the publishing imprint of Jack White’s Third Man Records, at the new TMR Cass Corridor storefront for award winning poetry readings from Detroit’s own wordsmiths Tarfia Faizullah, Jamall May, and Jennifer Nelson, plus the book launch for Life Is A Rip Off Part One by John Olson (of the band Wolf Eyes), and also Patrick Pantano (of Dirtbombs) showing his new book of photos. There will also be live music by Todd Albright. DRINKS SERVED.
Third Man Books: Where Your Turntable’s Not Dead And Your Page Still Turns


Readers—
Tarfia Faizullah
Poet, editor, and educator Tarfia Faizullah was born in 1980 in Brooklyn, NY and raised in west Texas. She received an MFA in poetry from Virginia Commonwealth University and is the author of Seam (SIU 2014), which U.S. Poet Laureate Natasha Trethewey calls “beautiful and necessary,” as well as Register of Eliminated Villages, (forthcoming from Graywolf 2017). In reviewing Seam for Slate Magazine, Jonathan Farmer observes “There is poetry here: our living language pulled into shape by hunger and intelligence.” Focused around a long sequence “Interview with a Birangona,” the book explores the ethics of interviewing as well as the history of the birangona, Bangladeshi women raped by Pakistani soldiers during the Liberation War of 1971. Seam is the recipient of the 2015 Great Lake College Association New Writers Awards, the 2015 VIDA Award in Poetry, and the 2015 Binghamton University Milton Kessler Poetry Book Award. Tarfia has collaborated with photographer Elizabeth Herman, emcee and producer Brooklyn Shanti, and composer Jacob Cooper, and serves as a contributing editor for The Offing. She is the Nicholas Delbanco Visiting Professor of Poetry in the Helen Zell Writers’ Program at the University of Michigan. She co-directs the Organic Weapon Arts Chapbook Press and Video Series with Jamaal May, and lives in Detroit, MI.http://www.tfaizullah.com/

Jamaal May
Jamaal May was born and raised in Detroit. His first book, Hum (2013), won a Beatrice Hawley Award and an American Library Association Notable Book Award and was an NAACP Image Award nominee.May’s honors and awards include a Spirit of Detroit Award, an Indiana Review Poetry Prize, and fellowships from Cave Canem, Bread Loaf,The Frost Place, the Lannan Foundation, and the Stadler Center for Poetry at Bucknell University. He is the 2014–2016 Kenyon Review Fellow at Kenyon College and a recipient of the Civitella Ranieri Fellowship in Italy. May has taught poetry in Detroit public schools and worked as a freelance sound engineer.http://www.poetryfoundation.org/bio/jamaal-may

Jennifer Nelson
Jennifer Nelson is a postdoctoral fellow at the Michigan Society of Fellows and assistant professor in the Department of the History of Art at the University of Michigan, Ann Arbor. She formerly edited poetry at Epiphany and Washington Square Review. She holds degrees from Yale University, New York University, the Courtauld Institute, and Harvard College. Aim at the Centaur Stealing Your Wife is her first full-length book of poems. http://www.uglyducklingpresse.org/catalog/browse/item/?pubID=1000010

John Olson (of Wolf Eyes http://www.wolfeyes.net/)
January 14 will launch the zine Life is a Rip Off Part One on third man books written by the one, the only, thee John “Inzane" Olson aka Inzane Johnny aka American Tapes aka 1/3 of Wolf Eyes. Eventually to be a full length book, Part One is the first three month installment of what will be twelve months of daily record reviews written in Olson's inimitable slash 'n' dash slanguage: anecdotal, immediate, reasonable and totally baller.Http://americantapes.us/

Patrick Pantano (of Dirtbombs http://www.dirtbombs.net/ )
Patrick Pantano began shooting professionally at a catalog studio in Troy, Michigan, while documenting the Detroit music community there in the early 2000s. His portraits of the bands in Detroit were widely published, most notably the images of The White Stripes, which were used as the sleeve art for the records White Blood Cellsand Elephant. Pantano’s work has been published in music magazines such as Rolling Stone, Spin, and NME. About his new book of photos available from Third Man Books, Pantano says, If You Don’t Have A Picture Then You Didn’t Catch A Fish is not only a tour diary of photos, but also, a photo journal of my life while in The Dirtbombs. There are images from tour, but also images from around tour; before leaving; after coming home; at home trying to figure out what I was going to do next; staged portraits I was working on; snapshots from evenings out; pictures of bands from Detroit. And then of course shows. Hotels, beds, backstages, giant spiders. The images for Fish are shot largely on film and date from 2000–2013.” http://thirdmanbooks.com/book/if-you-don-t-have-a-picture-then-you-didn-t-catch-a-fish

Music by Todd Albright
Todd Albright is a Country Blues, finger-style 12-string guitar player and singer living in Detroit, Michigan. An evening’s sonic evocations of pre-WWII Blues covers an extensive selection of material recorded in the 1920's and 30's. Playing the 12 string guitar, Todd brings to life an era composed of Blind Lemon Jefferson, Sylvester Weaver, Blind Blake, and Big Bill Broonzy, among others. Throughout the years, Todd has enjoyed sharing the stage with notable musicians and friends such as Dakota Dave Hull, Roy Book Binder, Charlie Parr, and Paul Geremia. Todd's newest record, set to be released in january 2016 by jett plastic recordings, features an entire set exclusively performed on the 12-string guitar. The album was recorded at Dakota Dave Hull's Arabica Studios in February 2015. http://www.toddalbright.com/

Metro Times music editor Mike McGonigal has written about music since 1984, when he started the fanzine Chemical Imbalance at age sixteen with money saved from mowing lawns in Florida. He's since written for Spin, Pitchfork, the Village VOICE and Artforum. He's been a museum guard, a financial reporter, a bicycle...
More
Scroll to read more Arts Stories & Interviews articles
Join the Metro Times Press Club