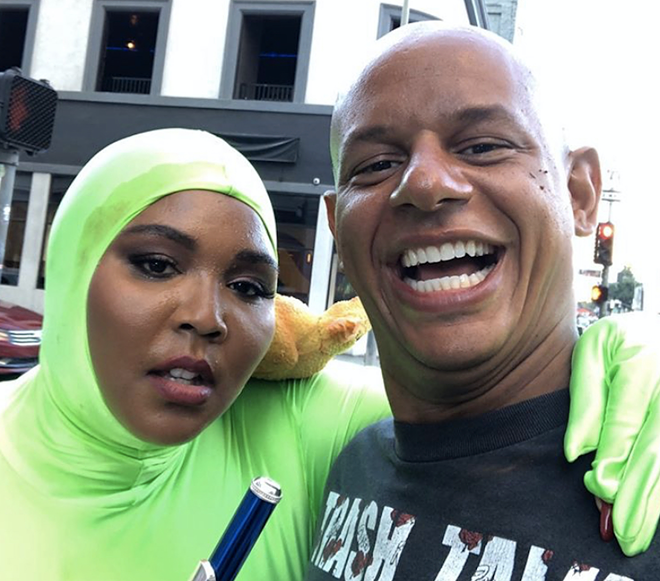 Comedian and agent of chaos — and surprisingly zen dude — Eric Andre shaved, waxed, and plucked as much of his body hair as possible for the fifth season of his Adult Swim series, leaving him looking like a creepy hybrid knockoff of Vin Diesel and Pitbull offering autographs outside of Grauman's Chinese Theatre in Hollywood. Unfortunate hair situation aside, he's at least got a willing friend and good sport in Detroit-born superstar Lizzo.

Known for freaking out celebs (watch The Hills star Lauren Conrad bail as a guest after Andre vomited and proceeded to slurp the vomit from his desk) and closing out most episodes by making rappers perform in impossible conditions, Andre announced on Thursday that Lizzo would be guest-starring on an upcoming episode, airing at midnight on Sunday, Nov. 1, on Cartoon Network's alternative late night programming block (aka Adult Swim).

In a clip from the episode posted to Andre's Instagram, Lizzo is not one of the show's many clueless, unsuspecting guest stars; due to Andre's popularity, he now has to source from, like, The Real Housewives franchise or, in the case of last week's episode, actress Judy Greer, who clearly did not know what she was in for when a hotdog fell from the ceiling.

Lizzo is totally in on Andre's public nuisance antics and even dons Andre's iconic green screen-friendly bodysuit from his "Bird Up” sketch, in which Andre hits the street with a fake bird posted on his shoulder for no damn reason other than to, well, we don't actually know. As with many of his sketches, the magic is in the post-editing, so as he's accosting strangers on the street, various and often absurd images are superimposed over his body, unseen to the people he manages to involve.

Of course, Lizzo brought her own prop: a flute. In the clip, she twerks and performs a TikTok dance or two as footage from The Jerry Springer Show flashes across her body.

It's best to not ask “why” when it comes to anything relating to Andre. Just sit back and grab some Ranch and read up on some 311 conspiracy theories, brotendos.

@lizzobeeating is on the show this Sunday! Midnight! @adultswim we are airing episode 3 and 4! 🦜 ⬆️