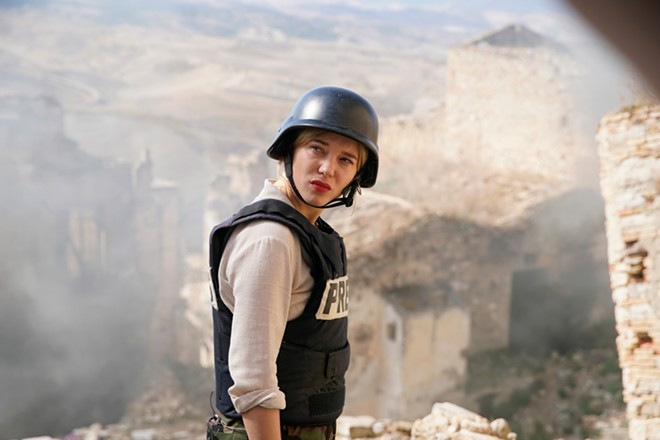 "My job is my job. I accept it. I take it as it is, and I do my best.... Only the present remains. Here and now. Forget all expectations. Don't postpone the present..."

During the two-minute final monologue of France, the latest feature from Bruno Dumont, the camera zooms, with painstaking slowness, toward the somber face of Léa Seydoux — cinema's arguable mien de rigueur of late 2021. With her egg-shell complexion, dark boy brows, wide-set eyes, and slight gap between the top front teeth, her angular visage does not exactly scream mega movie star or global sexpot for the ages. And indeed, it may be Seydoux's ability to resonate today that feels so salient.

A mercurial art-house fixture for over a decade (among her films are Blue Is the Warmest Color, The Lobster, and Oh Mercy!) and so-called "antithesis of a Bond girl," Seydoux, 36, may be the most familiar face onscreen this holiday season — playing prison guard turned artist's muse in Wes Anderson's The French Dispatch and resurfacing as Dr. Madeleine Swann for the latest James Bond, No Time to Die. With France, a satirical drama from a director perhaps best known for his eccentric Joan of Arc rock operas, Seydoux plumbs her shape-shifting powers to maximal effect. Playing France de Meurs, a television journalist grappling with an existential crisis, she is, by turns, weepy and maudlin, cheeky and winsome, manipulative and introspective — her prismatic array of jackets matched by a talent for transforming her persona shot to shot. Clomping up a cliff in some unnamed war-torn country, she orders her cameramen to get a move on — "Get me the shots! I want the ruins!" — only to feign tears as she melodramatically reports on a foreign battle. "Wherever we go, images of war are the same. Those of tragedy and desolation."

Central to Seydoux's appeal is her capacity to never look quite the same, even while always exuding a sort of mindful, sullen remove. In The French Dispatch, when she poses for death row inmate Moses Rosenthaler (Benicio Del Toro), her face shifts from serene to comically irked as he attempts to contort her nude body into more and more absurd positions. In No Time to Die, she seems at once fearful and disapproving from the passenger seat of a car chase, clearly uncertain of 007's competence to steer them out of harm's way. Paired with any male lead, Seydoux never seems powerless or obeisant, even if circumstances seem to demand the opposite.

"'It girl' has come to mean some cross of a new, young, generally hot thing known for attending parties and movie premieres and a new, young, generally hot thing who makes her name in a sphere (politics, journalism, golf, rap) broadly delimited to men," argued Anne Helen Petersen in her critique of the term's delimiting nature. "It's a seemingly safe way to declare someone as worthy of your attention without actually articulating what, exactly, merits that attention." Yet, for Seydoux, what attracts such mass regard — what makes her "It" at the present moment — warrants deeper scrutiny. She's not especially new, and certainly not young by celebrity standards. And if anything it may be her lack of seeming safety, her latent discontent, that feels suddenly vital today.

There's also how deftly she swings from androgynous to hyperfemme, and back again, across her storied career. From her baby-butch denim uniform in Abdellatif Kechiche's Blue Is the Warmest Color to her insouciant gaze in Louis Vuitton's new Capucines campaign, Seydoux has long resisted staid expectations of gendered presentation. Lacking the vampy petulance of Scarlett Johansen, for example, she nonetheless exudes a kind of sultry know-how, as plausibly attracted, and attractive, to a wild-bearded, homicidal painter as to a teenage girl on the verge of coming out.

France in France proves keenly aware of this irrepressible charisma; her exploits entertain as much as alarm. In one of the most incisive — and amusing — scenes, the character restages an interview with anti-ISIS militia somewhere in the Middle East. Wearing a headscarf with her belted khakis, she listens to a man translate the words of an armed soldier, visibly distracted as she plots the best way to shoot the exchange. "The people have been suffering daily for years, the French army helps us fight the enemies of Allah," says the translator in stumbling French. "We'll redo it," is her response, directed at the cameraman, before asking the soldier if he'd like a selfie. "Whiskey!" they chime at her smartphone lens, his ammunition draped over his chest.

Undergirding Seydoux's charm is a knack for appearing equally scrappy and posh; she is as believable joshing with a guerilla leader as she is throwing back a longneck in a lesbian dive bar in Kechiche's 2013 Palme d'Or-winner, or dining with the glitterati in France. "The golden age of nation states is dead," declares the president of the philanthropic organization hosting the fundraiser. "CEOS of international firms, financial market deciders, economic operators, we must impose ourselves...to build a new social-political world order." As the one percent nods and claps, France de Meurs surveys the faces of those at her table. Ball-gowned but glowering, she is at once at home in such a space but visibly ill at ease.

Seydoux herself hasn't shied from acknowledging a sense of ambivalence about fame in 2021. "The pandemic was really tough. It made me ask questions about the world and I watched as things fell apart," she told Vogue in October, her recent pixie cut redolent of Jean Seberg. "It felt like people would be more aware of the serious problems we face after it, but now, it feels like nothing happened...I'm a bit distressed about the world right now." Perhaps with France, Seydoux cements her "It Girl" status by playing a woman trying, and failing, to flee it.