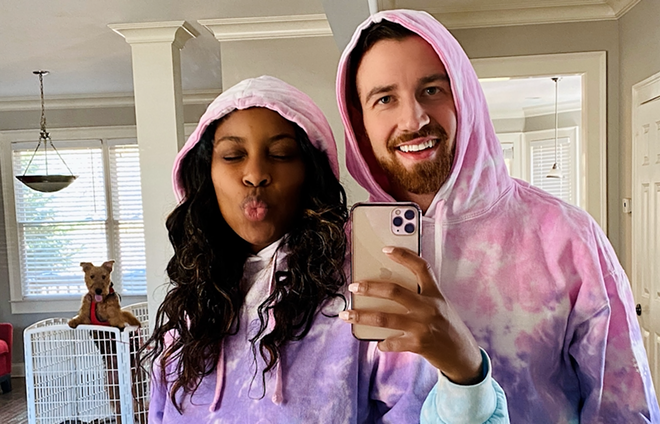 Love Is Blind has been a breakout reality hit for Netflix. The show, which debuted last month on the streaming service, has made superstars out of two of its participants: Lauren Speed and her husband Cameron Hamilton.

Audiences fell in love with Speed's down-to-earth personality and her relationship with Hamilton, whom she met and married on the show. The couple wed in 2018, and according to Speed, their marriage is still going strong.

Speed is a Detroit native — she and her brother, music producer and DJ Nick Speed, grew up in Southfield. Their mom, Pam, is a teacher and their father, Bill, was one of the first vice presidents of Black Entertainment Television. In fact, he created Video Soul — the network’s signature music video program, which debuted in 1981.

“Music and entertainment was a huge staple in my childhood,” Speed says. “Our family lived off of music… literally.”

The couple has been on a whirlwind press tour since the finale on Feb. 27, and of the two couples who wed on the show, they are by far the most popular. The premise of the show is for singles to get to know each other through conversations in “pods” where they are unable to see each other. At any point, a participant can propose to the person they have been talking to, at which point they finally meet in person.

“I was one of the people who made a genuine connection right away (with Hamilton),” Speed says. “Due to the heightened hyperfocus in the pods, every day felt like a month.” The couple estimates that the time they actually spent talking to each other in the pods was over 100 hours.

As for falling in love on camera, Speed says, “When I first arrived, it was difficult to get out of my own head. But, once I really focused on building the relationship and didn't focus on the film aspect — the cameras kind of melted away into the background.” Photo courtesy of Netflix
A young Lauren with her father, Bill Speed.

One of the highlights of the season was the interaction between Hamilton and Speed’s father, Bill, who was not keen on the show’s premise and wary of the young man who was to marry his only daughter. According to Speed, the relationship has evolved for the better. “My Dad and Cam have gotten really close,” she says. “We have Sunday dinners, we eat, play music, and laugh all night. It's a beautiful thing.”

The couple lives in Atlanta, but at heart, Speed is still a Detroit girl. She says that she is looking forward to taking Hamilton to her favorite hometown restaurant, Pita Cafe. Meanwhile, the entire experience has been surreal for her older brother, Nick Speed. An acclaimed music producer who has created classic hits for 50 Cent, Talib Kweli, Danny Brown, and more, Nick is wowed by his little sister’s sudden superstardom.

“It’s been really crazy to watch,” he says. “I knew people would like it, but it was crazy to see her name trending on social media and to see her Instagram followers surge to like a million people in a matter of days.”

Nick’s confused expression during the wedding conveyed his doubt about the whole process. “My brother for sure had the screw face throughout my whole wedding,” Speed says with a laugh. “I think that he was kind of in disbelief of everything, which I don't blame him for. I love my brother though. We have always been close and looked out for each other and he supports my crazy decisions.”

The success of the show has been a springboard for the Speeds. A few years ago, Speed created the Speed Brand — a multimedia company to house projects that they and their father want to create. The success of Love Is Blind, and rumors of a Speed and Hamilton-spinoff, has put new energy behind their projects. The couple recently launched a YouTube channel, Hanging with the Hamiltons.

“My wedding and marriage was definitely not the conventional process,” Speed says. “But, it's been awesome. The love that we have been getting is overwhelming in an amazing way. People from all over the world have been inspired by our story, and I'm so thankful for it.”

Biba Adams is a Detroit-based national freelance writer. Her work has been featured in Visit Detroit, Model D, VIBE, and more. She is currently working on her debut book, Scenes From a Renaissance: Detroit Hip-Hop 1996-2006.
Read More about Biba Adams
Scroll to read more Arts Stories & Interviews articles