In Defense of Dirt Weed

Let’s hear it for the really weak weed. 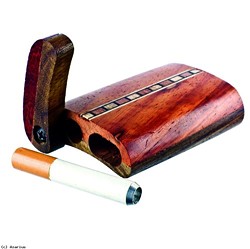 Don’t get us wrong here: We like most of what’s come with the medical marijuana revolution. The public accepts marijuana as medicine and, increasingly, as recreation. Many law enforcement folks feel they have more urgent priorities than chasing down peaceful pot smokers. And voters are making their voices heard across the country on the issue. Clearly, it’s a good time to be a toker.

Yet, with the changing times have come many powerful strains of marijuana, which, mind you, we enjoy — in moderation. Of course, there were prime grade varieties of marijuana in the old days, such as Maui Wowie or Acapulco Gold. But, once upon a time, for all but the most engaged pot smokers, a big bag of skunky, piney weed would do — liberally sprinkled onto a Big Bambú paper and rolled into a generous joint, passed around with the smooth finger roll.

That was long before today’s strains, which come with such fanciful monikers as Chemdog, OG Kush and Sour Diesel. And behind those funny names are some killer highs. Because today’s weed is much stronger, partly because, ever since medical marijuana went legit, the garden-variety smoker has inherited what longtime stoners consider to be the Holy Grail of weed: the fabled “one-toke smoke.”

And it makes sense. Instead of hauling out a huge goodie bag, you toke a pinch-sized hit and you’re sky-high. But the casual smoker will find it difficult to try smoking a joint of it. Frankly, even mixing in some tobacco for a spliff doesn’t diminish this superweed’s power too much. Of course, you can use a one-hitter, but it just doesn’t feel the same. Toking a “oney-bat” has all the nuance of firing up a crack pipe. And passing pipes around means passing lighters along with them. It’s enough to make you long for the leisurely process of smoking a big old joint, something that skunky old Mexican brick weed was especially well-suited for. For a particular set of people, a fat reefer was the equivalent of a glass of wine after a long day — usually consumed to the music of The Allman Brothers Band.

We used to enjoy lighting one up during the opening credits of a movie; usually by the time it was halfway smoked we had set the doobie down and forgotten about it. But given the potency of some of today’s pot, you may smoke half the thing only to have a tremendous high creep up on you. You can find yourself forgetting what movie it was — while you’re watching it. That’s when bizarre internal conversations can suddenly abound. “I’ve been waiting for this DVD for days and now I can’t remember … let’s see: It has Nicolas Cage in it. What is it? Where’s the sleeve?”

Consider yourself lucky if you can find that sleeve. Your brain cells have all left their desks and are dancing around the office, leaving you in a stoned torpor.

We also used to enjoy smoking a joint before taking a walk. If you want to have more than one hit of today’s pot, you had better first lay out anything you intend to take with you, including sunglasses, your wallet, and your keys — especially your keys. For that matter, bring a map!

We can’t help but note the irony that, as the punishments for smoking pot get lighter, the pot itself gets stronger and stronger. At this point, it’s hard to believe Detroit’s own John Sinclair ever got sentenced to 10 years for just two of his generation’s joints — even if they were real bombers.

Born in 1969 at Mount Carmel hospital in Detroit, Jackman grew up just 100 yards from the Detroit city line in east Dearborn. Jackman has attended New York University, the School of Visual Arts, Northwestern University and Wayne State University, though he never got a degree. He has worked as a bar back, busboy,...
More
Scroll to read more Culture articles
Join the Metro Times Press Club