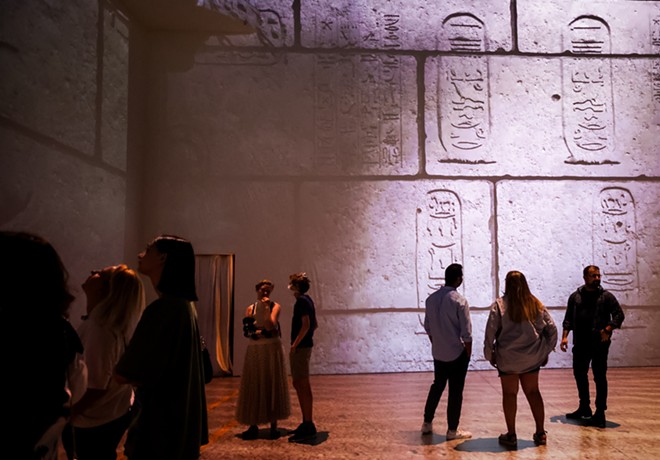 Lighthouse Immersive is at it again with an Immersive King Tut exhibit that’s headed for Detroit this November.

They’re the same folks behind the Immersive Van Gogh projection mapping show that was delayed at least three times but seemingly went off without a hitch in May once a venue was finally announced.

King Tut: Boy. King. Hero. will open on Nov. 4 at Lighthouse ArtSpace Detroit (the former Harmonie Club building). Much like Immersive Van Gogh, the traveling King Tut exhibit will make its way across 21 cities throughout the country including Detroit, Cleveland, Chicago, Dallas, Denver, and more.

The exhibit will use video mapping and animation to tell the story of King Tut’s passage into the afterlife and detail the Amduat Egyptian funerary text depicted on the tombs of pharaohs.

Lighthouse Immersive partnered with the International Foundation for Fine and Decorative Arts, and the Egyptian Council for Tourism affairs to create the exhibit which will commemorate the 100th anniversary of archaeologist Howard Carter’s discovery of the “boy king’s” tomb in November 1922.

“Since the discovery of his tomb a century ago, Tutankhamun – or King Tut – has transfixed the world,” Corey Ross, producer of Immersive King Tut, said in a press release. “Over the past one hundred years, the magnificent artifacts from his tomb have drawn millions of visitors eager to see first-hand the grandeur and splendor of Egypt’s most famous leader. This captivating experience will use sight and sound to transport visitors more than 3,000 years into the past in a groundbreaking way that only Lighthouse Immersive can.”

The creative team at Cocolab in Mexico City designed the exhibit headed by César Moheno-Pla, with original music by Edi Kistler and art direction by Renata Galindo.

If you aren’t into the projection mapping trend and would rather look at physical replicas from the pharaoh's tomb, the Charles H. Wright Museum of African American History also has a King Tut exhibit that’s up until August 22.