And I’m actually mad about it 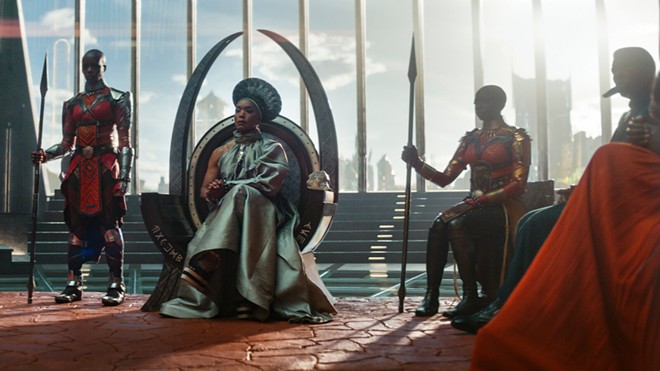 In August 2020, I was doom scrolling when the news popped across my feed that Chadwick Boseman was dead. I googled it, but there were no obituaries yet, so I texted friends.

They confirmed it, and in the next few minutes, so did news organizations. I was shocked when Kobe Bryant died. I was shocked with Robin Williams died. But I didn't take the deaths personally. It never felt like I had lost something. In other words: I did not cry.

When I saw the photos of Boseman, though, and even now writing about it, my eyes started to burn. I wasn't even sure why. He played King T'Challa/Black Panther in the film Black Panther, which I thought was fine. I didn't go see it a bunch of times. I had also seen him in 21 Bridges, which I hadn't thought much of. So why was I crying?

Part of me thinks the trauma of 2020 had finally ground me down. It was another loss in a year of so many losses. Not just death, but the time we lost together, the trips that were never taken, the events we couldn't hold. The jobs that were lost. The civility that we threw away without a second thought. Humanity seemed to be teetering on the brink of disaster, and now we'd lost a really good man. Boseman had famously been sick and still working, not telling anyone as he cranked out films about Black heroes like Jackie Robinson (42), Thurgood Marshall (Marshall) and James Brown (Get on Up). As the Twitter meme said, Boseman understood the assignment.

And now he was gone, and I grieved.

But there was something to look forward to. Boseman wasn't yet gone forever. There was another Black Panther coming out, and that would be our chance to see him one last time and say goodbye.

When the trailer for Black Panther: Wakanda Forever came out and I saw the funeral scene, I was assured this was going to be a fitting tribute. I teared up at the beautiful moment when "No Woman No Cry" morphs into "Alright" by Kendrick Lamar. I felt all the things: excitement, Black pride, sadness, joy ... it was going to be hard to wait to see the movie.

I finally saw Wakanda Forever on November 10. The first thing that happens is that Black Panther, a.k.a. King T'Challa, a.k.a. Boseman, dies off-screen of a mysterious illness. We're in the lab with his sister Shuri (Letita Wright) as she does some crazy (very fake looking) science to try to save him. Then the Marvel logo comes up and it's all snippets of Boseman as Black Panther. The theater was perfectly silent, and it was the one moment of genuine emotion as we saw exactly what we had lost.

Then we see the beautiful funeral procession and watch Shuri touch her brother's coffin before it is lifted into space and flown away (a little odd). Then the film cuts to black, and it's one year later.

That's all we get of Boseman. The studio never pieced together footage so we could have one more scene with him. This is the same company that CGI'd Samuel L. Jackson's face so he would look 30 years younger in Captain Marvel, but they couldn't find a few snippets of T'Challa to have him visit Shuri when she went to see the ancestors?

Instead, the rest of the movie becomes a bloated mess about Namor, an underwater god (or something), who wants to wage war with Wakanda because the movie has to be about something...

Some people probably thought the funeral, where everyone was in their funeral whites and drummers were playing in front of a beautiful mural of Boseman, was enough of a tribute.

I am here to tell you it was not.

I wanted catharsis. I wanted it to feel like a hero had fallen, someone irreplaceable and imbued with such significance, such resonance, that no one knows exactly what to do next.

In a meta way, I got that. Because Wakanda Forever is definitely a movie in search of a hero (and plot). But the movie has no tension. No deaths really matter, not even T'Challa's. And you know most of the characters won't die, like Namor, Shuri, the girl who will be the next Iron Man, and so on. There is one surprise death (no spoilers), but it is framed in such a way that it leaves us feeling nothing.

There are a ton of other problems with the movie. There are two young female scientists in the film, three women acting as bodyguards, and two FBI agents. All of these duplicate characters keep the run time bloated, as do all of the long and tensionless action sequences and Namor's backstory. (Which, as with all underwater storylines, makes less sense the more the movie tries to explain it.)

But that's not why I'm mad at Wakanda Forever. I'm mad because this was the one chance to pay tribute to Boseman and we got five minutes at the beginning of the movie and then nothing. Do Marvel folks know what catharsis is? Do they know what it means to lose the first big-screen, franchise-carrying Black action hero?

We needed to see Wakanda fall.

We needed to see them lose their hero and then lose almost everything else when he was gone. We needed to see a country and people lost and pushed to the brink and unsure if they could come back, or how, without their champion.

We needed there to be stakes, and we needed those stakes to be high, dammit.

And then she would win, but at a great cost. It would tell us that even in the midst of a season of loss, even when our hero has fallen, there is still hope. There is still the ability to rise again. And even though we're in the darkness, we'll once again have our time in the sun.

Few critics are willing to call the movie bad. (It's even the topic of a Vulture podcast.) But it is bad. Chadwick Boseman deserved better.

Rosalind Early is editor in chief of our sister paper, the St. Louis Riverfront Times, where this review was originally published.