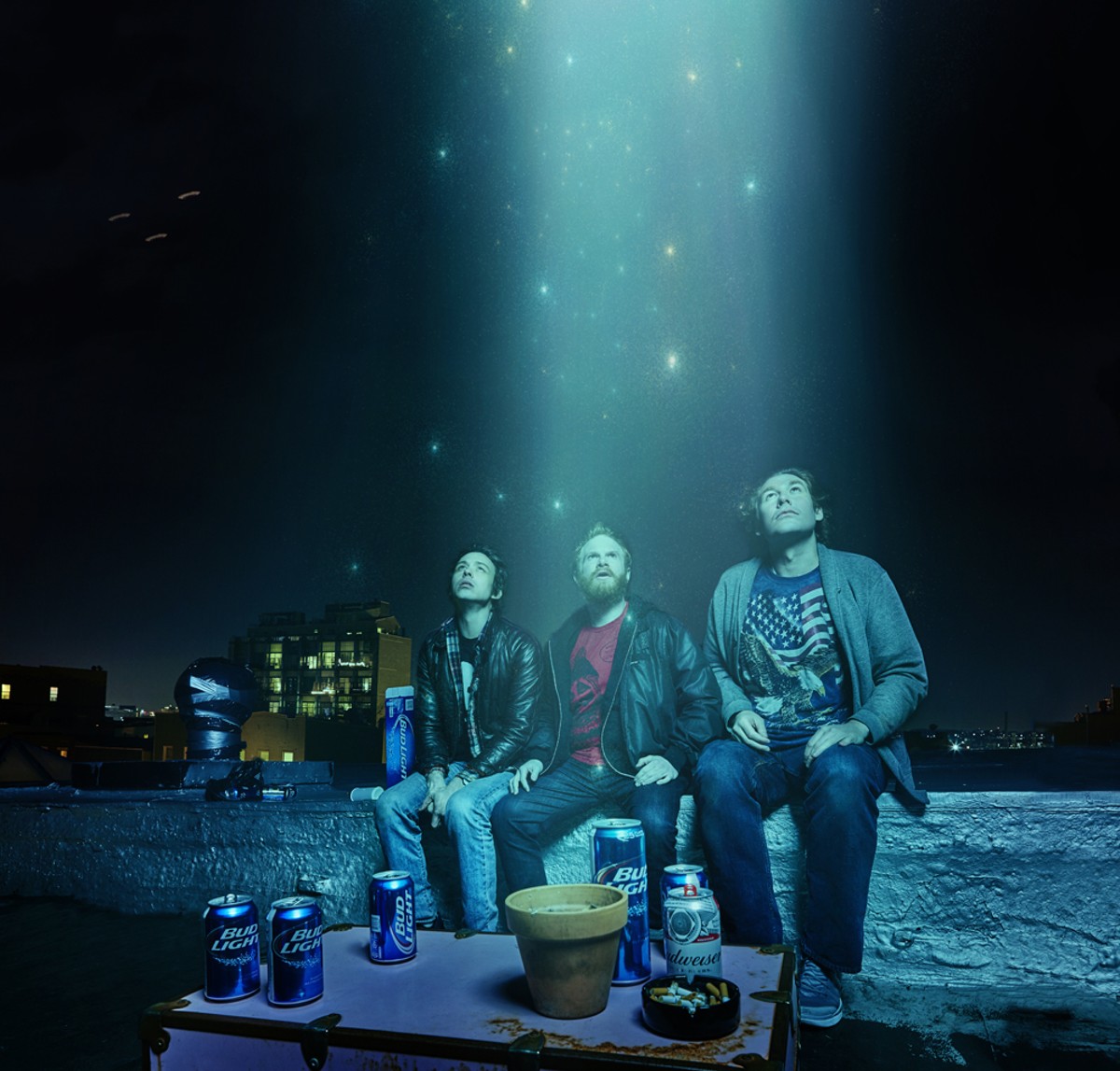 What do Ted Bundy, Scientology, Skinwalker Ranch, werewolves, the love life of H.H. Holmes, chaos magick, O.J. Simpson, Hollow Earth theory, Charles Manson, Slenderman erotica, Norwegian black metal, Jeffrey Epstein, and Papa John's "day of reckoning" have in common? Aside from reading as a demented list that an algorithmic bot may have populated when asked to write an episode of The Bachelor or a pretty comprehensive summary into our Google search history, they are all topics covered on The Last Podcast on the Left — the podcast that laughs in the face of horror.

Since 2011, longtime friends Ben Kissel, Henry Zebrowski, and Marcus Parks have hosted The Last Podcast on the Left, a love letter to their shared passion for all things fucked up. Each week, LPOTL delivers one full-length episode, which is sometimes one of a series on bigger topics (the Mormonism and Jonestown episodes are a must-listen) tackling a specific macabre topic, person, or phenomenon and peppers in weekly minisodes and side stories, which feature Kissel and Zebrowski taking on listener emails and timely news topics that err on the side of darkness, while Parks researches for the week's main event, and as of the past few years, writing and researching the trio's upcoming book, The Last Book on the Left: Stories of Murder and Mayhem from History's Most Notorious Serial Killers. Together, they also tour a variation of the show across the globe, performing nearly 75 shows in 2019 alone, including their debut appearance in Detroit at the Masonic Temple this Friday, Dec. 6.

A proud Satanist, comedian, and actor (The Wolf of Wall Street, Your Pretty Face Is Going to Hell) Zebrowski is a member of Mufon (that's the Mutual UFO Network, which is made up of civilians who voluntarily investigate alleged UFO sightings), owns artwork by clown-dressing killer John Wayne Gacy, and serves as the podcast's voice and character creator. Bud Light and chain restaurant enthusiast Kissel is a political commentator who can frequently be seen defending Millennials, Kathy Griffin, and Democratic ideals on HLN and Fox News. (Kissel also ran for Brooklyn borough president with the Reform Party in 2017, which he did not win.) Parks is the program's producer, lead researcher, chief storyteller, and, arguably, the hardest working podcaster in the world.

When we catch up with the newly married Parks (Zebrowski officiated the wedding, working in right-hand path magic and Satanic rituals), he refers to his research and life partner, Carolina, as his wife out loud for the first time as he takes a break from reading about Bill de Blasio's return to mayorship in New York City, where Parks lives, and Kissel is awaiting a morning Taco Bell delivery — though not breakfast, but dos chalupas — and dishes on being the first to receive the unproofed copy of The Last Book on the Left.

"I got it in the mail yesterday. It's awesome," Kissel says. "It's just a beautiful book."

The book, due out in April, took nearly two and a half years to complete and was written by Parks, while both Kissel and Zebrowski contributed by injecting jokes. Artist Tom Neely was recruited to illustrate the book's nine chapters, which serve as an extension of "heavy hitter" serial killers LPOTL already covered.

"It's the people that we covered in the early days back when we didn't quite know what we were doing," Parks says. "Back during the first 150 episodes or so when we covered Ted Bundy, John Wayne Gacy, Richard Ramirez, and Jeffrey Dahmer — like, all of these killers — we just didn't really have the chops that we have now. So with the book, we wanted to go back and do all of these killers right. We wanted to really blow out these stories ... of course, the book is funny as hell, too."

The trio pioneered the true-crime comedy genre, but never at the cost of the victims. (Nothing is truly off-limits, including but not limited to sex crimes, dismemberment, necrophilia, torture, alien probing, and pedophilia.) Their targets are always the killers, both well-known and not (like a recent mindfuck of a two-part episode on Hadden Clark), cult leaders, and, well, L. Ron Hubbard. Sure, Zebrowski's Charles Ng voice is, perhaps, racially insensitive (though he's often put on watch by Parks and Kissel), but his Pee Wee Gaskins interpretation — the serial killer who was was charged with eight counts of murder but claimed to kill somewhere between 100 and 110, deeming his claim as "the final truth" during an interview — has become a fan favorite. Zebrowski's Detective Popcorn character, which is literally a bag of popcorn, was spawned during the BTK Killer episodes after the hosts discussed the incompetent police task force assigned to the brutal killings, who referred to themselves as the Hot Dog Squad. Detective Popcorn, too, is incompetent and is as horny as he is hungry for his buttery kerneled self.

Parks says he didn't see the "true-crime boom" coming, which has given legs to the likes of Karen Kilgariff and Georgia Hardstark's podcast My Favorite Murder and the popular, heavily researched Netflix series Mindhunter.

"We were just making each other laugh, and it wasn't necessarily something that we thought would become as big as it eventually did," Parks says. "And then it just seemed like the rest of the world kinda caught up to us when we were about six years in. It just sort of evolved from there, and people started paying attention to it. After people started paying attention to it, a community started to form around LPOTL and that's what really [took us] to the next level."

Kissel adds: "I had a day job until 2017. Everything that we did, we did for free for the first seven, eight years."

The show originated as a horror movie podcast after Kissel and Parks watched the 1980 Italian horror film Cannibal Holocaust together. It wasn't until the third episode that Zebrowski joined, and Parks says that's when the program became something completely different. Kissel views the program as a direct reaction to how mainstream media mishandled coverage of horrific crimes.

"In a lot of ways, they did a massive disservice," Kissel says. "But as far as the mainstream of true crime, it was still, you know, the Nancy Graces of the world and [the] hyperbolic insane [coverage] of serial killers in an almost — I don't want to say goofy, but just kind of a bizarre way. And so the way that I think of — specifically, Marcus and Henry, when they really got into the psychology of these people — I think it's sort of shed a different light on true crime that people hadn't heard before. We just didn't realize that they were actually really yearning to know the true story behind all of these bizarre people."

Averaging 2.5 million weekly listeners, LPOTL is more than 400 episodes deep, and, since its inception, Parks has launched the Last Podcast Network, which is home to 13 programs, including The Roundtable of Gentleman, Abe Lincoln's Top Hat, The Adventures of Danny and Mike (hosted by Danny Tamberelli and Mike Maronna from Nickelodeon cult favorite The Adventures of Pete and Pete), and nerd pop-culture exploration via Wizard and the Bruiser. The show, which has been a DIY grassroots program since Day One, earned the trio a Webby Award in 2017 and, as of 2019, more than 11,000 subscribers on the crowdfunding site Patreon. Unlike Kickstarter, Patreon acts as a subscription service for creatives, where fans can commit to monthly payments to access exclusive content. As of right now, LPOTL rakes in a little more than $52,000 a month from Patreon subscribers. Last month, however, LPOTL made a major announcement that all of its future content and entire back catalog will be offered exclusively through Spotify in a push by the streaming giant to expand to podcasts.

"Over the next couple of months, we will begin a partnership with Spotify who have shown us we have the same goals in taking podcasts seriously," Zebrowski announced on Twitter. "We will be posting on all feeds for a while, also the show remains free. They do not own our network but are going to support us in expanding the shows we make, which means more staff, higher quality podcasts, and more content."

The Twitterverse bemoaned the move, griping that it goes against LPOTL's heavily vocalized anti-big corporation stance. "I've worked for far worse corporations doin' TV," Zebrowksi said. "Spotify is an app company with no parents that make bombs or shit. It's just an app!"

As LPOTL grows its gory empire, Parks reminds us that, although the series is meant to educate people on the strange lives and even stranger crimes of sick minds and is intended to bring levity to the most vile, lascivious, and brutal stories, it's also an opportunity for listeners — and LPOTL hosts — to examine their own experiences, be it with trauma, mental illness, or dark impulses. Parks, who often says that "mental illness is not your fault, but it is your responsibility," believes this is vital not only to understanding LPOTL's ethos, but also to understanding ourselves.

"I identify with Dylan Klebold of Columbine because I was that same type of teenager that he was — like, that exact same type of, like, very mopey, very depressed, very angry all at the same time and trying to look for some sort of meaning. I relate to a lot of the guys that have mental issues, but with all of them, that relation ends the moment they make a decision to hurt somebody else ... and I think when people relate to these villains, they should not feel bad about themselves — they should look at it. ... That's one of the reasons why a lot of these people cross that line — because they never examined the darkness within them."

Kissel says that killers like Bundy, Manson, and Gacy are not undefeatable "superhuman monsters" as portrayed in the media. They're just humans with human stories.

"The way that we discuss what they've done in the context of their humanity, I think, is a really unique way to cover serial killers," Kissel says. "It also disempowers them [when we] realize these are not creatures that you can't defeat. We all have things that are similar to one another. There's always connected tissue. There are always things that are just universal pain, suffering. A lot of the abuse that some of the people we cover go through — there's always moments where you're like, damn, they obviously ... made the wrong choices, but there are definitely moments where you do sympathize with a lot of the physical abuse and the emotional abuse, sexual abuse, that a lot of these people go through, and they just didn't have the coping mechanisms to deal with them properly."