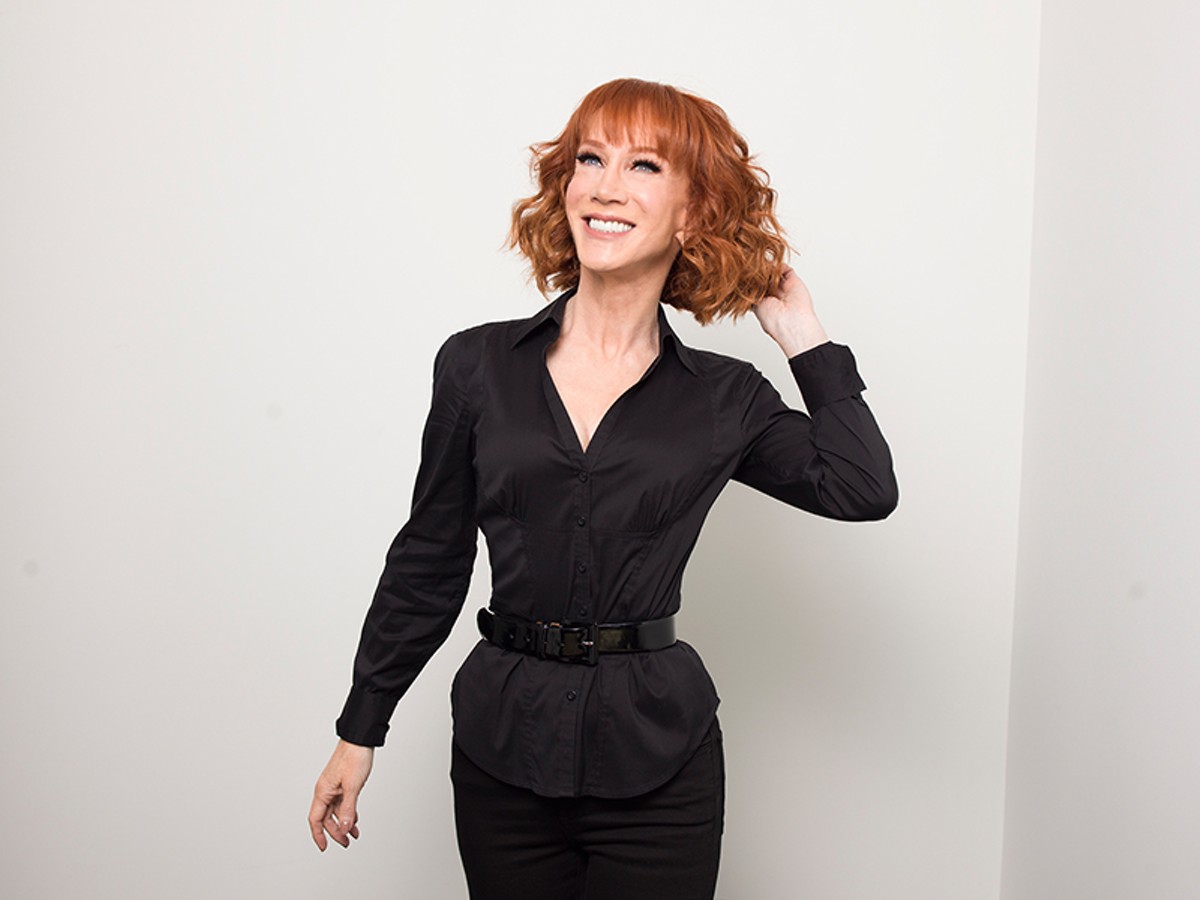 Before the comedian will dish on what it was like living next to "Kim Kardashian West and Kanye Kardashian West" (something Griffin describes as a merciful act from the comedy gods) or the latest rumor her 98-year-old "a-box-of-Franzia-a-day" mother Maggie has been spreading, she has one very serious question: "When will this end?"

Both of us know very well that for Griffin, it's far from over. Today, Griffin's battlefield is Twitter. Her opponent? Donald Trump Jr., who Griffin, without explanation, refers to as Eddie Munster.

Today, Don Jr. retweeted a video of a man heckling Griffin about her deceased, pedophile brother during her Laugh Your Head Off tour stop in Philadelphia. Griffin describes the man (a Ted Cruz supporter, frequent user of the hashtag #PedoGateNews, whose Twitter avatar is of a makeup-less Griffin) as a member of QAnon — the scary pro-Trump conspiracy theory movement that suggests that Robert Mueller and President Donald Trump are working together to expose pedophilia networks around the world.

"When Don Jr. tweets something like that today, that makes me unemployable," Griffin says. "Can you imagine Sasha or Malia retweeting something like that? How are we supposed to believe in actual democracy when 30 percent of people think Donald Trump is personally breaking up child sex rings around the world? I wish that was one of my jokes but it's something people actually believe."

"You've caught me on a day where I'm on a tear," she says. "Where the fuck is my advocate? Is anyone going to be my advocate?"

If anyone is in need of advocacy it's Griffin, as 2017 was nothing if not a historic year for the 57-year-old comedian, who ranked as the eighth most Googled name in the world. Her Emmy Award-winning D-list fame was thwarted by an exhaustive Hollywood blacklist and a no-fly list exile as she found herself at the center of a two-month federal investigation for what has been infamously referred to as "the photo."

The photo, taken and shared by photographer Tyler Shields, shows Griffin holding a mock-up mask of a beheaded Donald Trump covered in ketchup. Griffin shared the photo on her social media accounts with the caption "there was blood coming out of his eyes, blood coming out of his... whatever," a response to Trump's campaign trail comments about Megyn Kelly's menstrual period, made during the Republican presidential debates. In the photo, Griffin is smiling.

Within 24-hours, she issued a tearful apology via a press conference, but the damage had been done.

"For the first time in the history of this country, a sitting United States president would use the power of the oval office and Department of Justice to investigate a female comedian. Even the Lenny Bruce stuff," she says, a reference to the 1960s comedian whose trial conviction for obscenity was a landmark for freedom of speech, "he was arrested and then he got out. This isn't the local redneck police department arresting my friend Stormy Daniels in Columbus, which was some bullshit, by the way."

Griffin quickly digresses into a genuine pitch for a New Year's Eve special, which she says every streaming service has turned down, starring herself and Daniels wearing bathrobes and drinking champagne "somewhere in Washington, D.C."

"I have a headline: 'One can't stay away from the microphone, one can't stay off the pole,'" she says. "Come on, Pay-Per-View. It's got something for everyone."

Her former bestie and CNN New Year's Eve co-host Anderson Cooper was among the first of many to distance himself from the comedian following the photo. Commercial endorsements crumbled, talk shows wouldn't touch her, emails went unanswered. Even her own team of representatives turned their back on Griffin.

Two months after the photo, she found herself simultaneously exonerated by the secret service for conspiracy to assassinate the president and protected by the Federal Bureau of Investigation, which was enlisted to look into "credible threats" on her life. The threats forced Griffin to bunker down in her Bel Air mansion. Her mother also recieved death threats, as did her now-deceased sister while in hospice.

"I have a lot of people online, certainly not my paid advisers, saying, 'Put it up again, everything is different now, we get it,'" Griffin says. "I don't like the feeling of 1,800 people sitting in my audience thinking, 'Am I safe? Is there another QAnon crazy three rows behind me?' I love being unpredictable. I love improvising. I don't want to improvise when you or I are going to get shot."

Before "the photo," Griffin's most controversial moment occurred during her 2008 Emmy Award acceptance speech for her Bravo reality show My Life on the D-List, where she told Jesus to "suck it" and proclaimed "this award is my god now." The comment caused a mere ripple in her career as the only fallout came from the producers of Disney's Hannah Montana, who fired Griffin from a scheduled appearance. Shortly after, she would joke to an audience at the Apollo that the then-media circus known as "Octomom" had "plump pussy lips" on her face, which resulted in an immediate ban from the venue. She admits that the world is a different place now.

"Quite frankly I think that's why I won the Emmys the next year, because I think Hollywood wanted to show, 'Hey, this girl got up there, she said something kind of obnoxious, but that's what the arts are about that's what comedy is about — pushing boundaries.'"

"If you're going to tell me that I should be civil in light of all the crazy shit that is actually happening by the hands of our own government, then I enjoy being the least civil Kathy Griffin I can be," she says. "And yes, I am talking about myself in the third person now which puts me in a category with Bobby Brown."

Griffin admits that if there's one thing she's learned from "the photo," it's that there are many forms of disobedience. She has since retracted both of her public apologies, and her Twitter feed is an hourly war zone of no-holds-barred takedowns of every moving part in the current presidential administration. She is also unabashedly peddling a slew of "Fuck Trump" and "Impeach Brett" merchandise because, as she says, she wants to make things "to hide when your scary cousin who has decided that Hillary Clinton is running a child sex ring in a pizza parlor comes over."

"One thing I like to tell the audience is that I love Michelle Obama. Love her. Love when she goes high. But I'm going to be down in the mud rolling around like a dirty pig where it's uncomfortable because somebody has to, goddammit," she says. "I've never seen anything like this and I've been doing stand-up since Bill Clinton jizzed on the dress."

Her latest tour, a 27-date run, and her first in this country since before the photo was released, is coming to an end. Following a sold-out trek overseas, she reminds that the United States is the last to grant her forgiveness. The Laugh Your Head Off tour finds Griffin clearly embracing the scandal while returning to what she does best: creating comedy for "gay men and soccer moms" and skewering celebrities. She takes on everything, including watching Kim Kardashian West tote her kids around in her custom Rolls Royce golf cart, a run-in with Sean Spicer at the White House Correspondents' dinner (which she suggests "did not go Sean's way"), a strange Stevie Nicks encounter, and her extensive evidence proving that Fox News mouthpiece Tucker Carlson is not a real person.

Griffin is quick to assure that her three-hour show (she doesn't have an opener, she doesn't take a break, and has been known to go as long as three hours and 20 minutes) is not a downer or a "lecture on the First Amendment," but prides herself on being able to make one of her death threats "laugh-out-loud" funny.

"I do every show like it's my last because it might be. And I'm not trying to be hyperbolic," she says. "When the tour's over, I don't know my future. I don't have a single day of paid work ahead of me. I'm thrilled to do this tour and I'm thrilled to tell my story, but I'm not thrilled to be out of work after that. I'm trying to stay optimistic and keep people laughing."