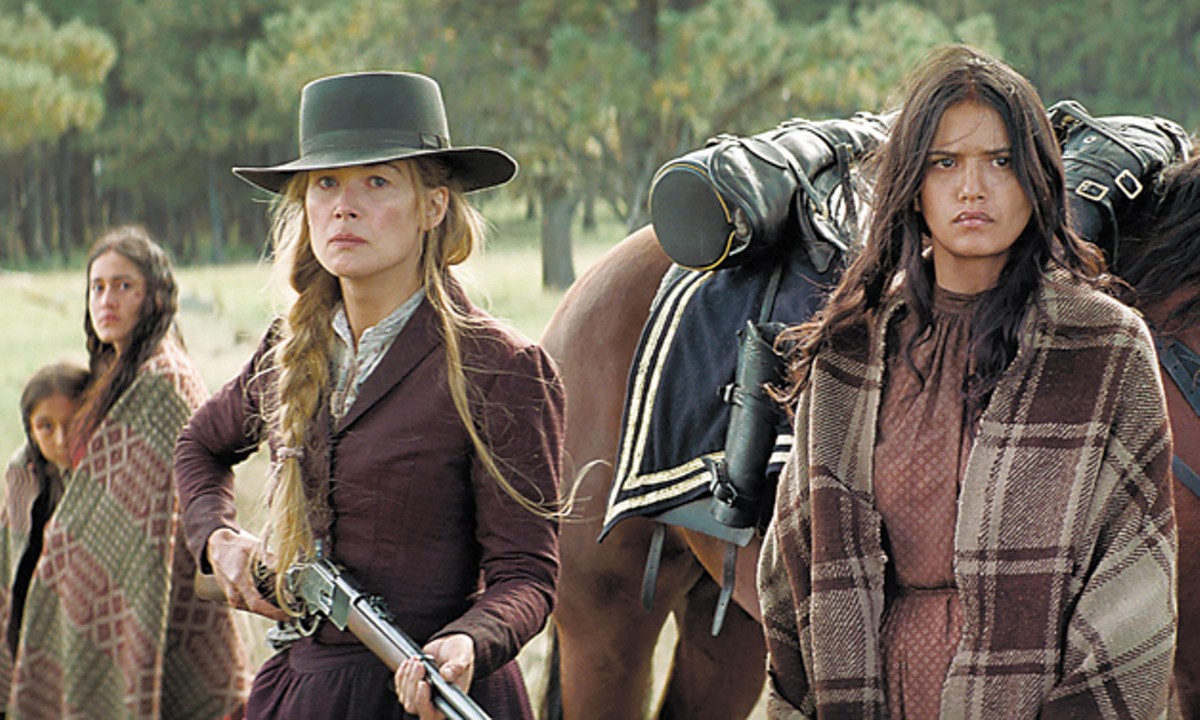 You know what the real white man's burden is? Living with the guilt of the colonialism, oppression, and genocide you are party to. I mean, look at North America. Sure, there are millions of Native people dead and ancient cultures destroyed, but who has to live with that? All the good soldiers who were just following orders, that's who. No one talks about that, do they? Won't someone think of the white man?

Scott Cooper is thinking of the white man in Hostiles, his revisionist Western that revises the genre right back into the white man's perspective, where it belongs. Oh, there will be lessons to be learned by the white man, lessons about how being a racist murderer weighs down on a white man, about how giving in to feels about the "things" he's "done" will be difficult and painful. And really, isn't the biggest crime in all this how the white man is forced to suppress his emotions and his humanity, how he suffers while making others suffer?

US Army Capt. Joseph J. Blocker (Christian Bale) is a "good soldier" who has made a career of fighting "wretched savages," but now, even at the end of his army days, he is not satisfied that he has done enough. "There ain't enough punishment for his kind," Blocker believes of Cheyenne Chief Yellow Hawk (Wes Studi), who has been held prisoner — along with his family, including a young grandson — for seven years at an army compound in New Mexico. The year is 1892, the frontier is closing, and attitudes toward the Indian back east are softening. The order comes from Washington: Yellow Hawk, who has got cancer, and his family are to be escorted back to "sacred Cheyenne territory" in Montana, where he can die in peace. As a one-last-mission before his retirement, Blocker is assigned the task. This is an indignity that Blocker would rather not have to endure, but his pension is at stake, so off they go.

Now, I know it sounds like Hostiles is a bit SJW-ish, in suggesting that the white man isn't in fact as happy as a june bug to be slaughtering people for not being white. And maybe it is, a bit. But I'd hate for you to think that the film does anything too radical, like present Yellow Hawk and his family as complicated human beings or anything. The Native Americans here are strictly one-dimensional, which is all Blocker's redemption requires:They just need to meet the abuse he doles out on their journey with quiet dignity, all the better to start thawing his cold, cold heart a little. So obviously they don't need much in the way of dialogue or character development. They just need to be the noble savages.

But then we also have some marauding Comanches, who are even less than one-dimensional, and who certainly aren't noble: They're faceless boogeymen who swoop in and kill. They did that to Mrs. Rosalie Quaid (Rosamund Pike), a nice white lady the travelers encounter who is the only survivor of a Comanche attack on her family. The Comanche are still out there, and still dangerous, but can Yellow Hawk and his son, Black Hawk (Adam Beach), convince Blocker that they must team up to defeat them? An alliance with savages is too much for Blocker to contemplate... but lo! The Cheyenne, who are literally in white man's chains, still have the kindness to honor the white lady's grief, which is loud and heartrending. If the savages can be gentle with a white lady — just like Blocker is! — maybe they're not so bad after all?

Still, there is a long way to go for Blocker. On one side, he has his master sergeant (Rory Cochrane), who has "the melancholy" over "our treatment of the Natives," and on the other, an unrepentent soldier (Ben Foster), whom the party is transporting to his hanging for heinous crimes that are unspecified but apparently indistinguishable to the "things" they all "did" to the Native peoples. Is there a middle ground for Blocker, one that lets him retain his manly stoicism while also grudgingly conceding that perhaps savages are people too?

"The essential American soul is hard, isolate, stoic, and a killer. It has never yet melted." D.H. Lawrence wrote that in 1923, and Cooper uses the quote to open his film. But ha on Lawrence! Here's Blocker's soul starting to melt way back in 1892. Granted, the American soul has barely budged since. But it's only been 126 years. Give it time.