Hopkins is brilliant, but the subject remains a mystery 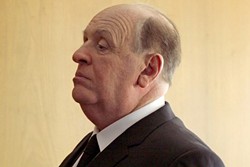 As far as middle-brow entertainment goes, Hitchcock is a breezy and cheeky way to kill 98 minutes, mostly because its leads, the entire cast for that matter, are so damn engaging. Buried under pounds of prosthetics, Anthony Hopkins brilliantly channels the watchful stillness, mordant charm and impish wit we've come to expect from the "Master of Suspense." And though John J. McLaughlin's script does Hopkins no favors, the actor still manages to provide a few glimpses of the human being hidden behind the icon. Most of these come thanks to Helen Mirren, who plays his wife, Alma Reville, as a no-nonsense spitfire. The two great actors clearly enjoy one another's company and go a long way toward communicating the couple's lifelong partnership, one built on respect and companionship — though probably not physical affection.

Unfortunately, by picking someone as well-known as Hitchcock, first-time feature director Sacha Gervasi (who used to play drums for the band Bush, and directed the documentary Anvil: The Story of Anvil) has set the bar rather high for himself. Hitchcock was the first filmmaker to turn himself into a well-recognized brand, carefully cultivating a persona of macabre tastes and droll humor. Understanding what made the famed director tick is something that even the great Francois Truffaut was unable to discover, despite his Hitchcock, their book-length conversation.

Despite the domestic bent of its drama, Hitchcock the movie is even less able to offer any insight. Using Stephen Rebello's book Alfred Hitchcock and the Making of Psycho, McLaughlin has shaped a comedic drama out of Hitchcock's decision to personally fund the infamous 1960 horror film (Hollywood's very first slasher flick) by mortgaging his home. Riding high on the success of North by Northwest, the iconic director had grown itchy to try his hand at something new, something that would revitalize his creative spirit. Hollywood, however, was convinced that Psycho would be career (and box office) suicide. So, for the first half of Gervasi's film, we watch as Hitch struggles to get his movie off the ground, recruiting Janet Leigh (Scarlett Johansson) and finding Anthony Perkins (James D'Arcy). But if you're expecting an insider's perspective on the master's process or some delicious film fan tidbits, you're bound to be disappointed. Hitchcock's behind-the-scenes peek is pretty standard stuff, unless you find the portly director's outsized appetites or delight in candy corn revelatory.

The second half of the film promises more but, ultimately, delivers less. Alma has begun collaborating with a flirtatious screenwriter Whitfield Cook (Danny Huston) — who, though you wouldn't know it from the film, had worked with Hitchcock in the past on Strangers on a Train – testing Hitch's trust in his marriage and, ultimately, revealing how important Alma was to his creative and emotional well-being.

This two-pronged approach to portraiture ends up failing because Gervasi never seriously attempts to delve into Hitchcock as a person or an artist, preferring to keep the director a colorful cipher — with only occasional lapses into generic human insecurity. While McLaughlin's script erects the scaffolding of a psychodrama, his conflicts are formulaic and oversimplified, never enriching our understanding of the filmmaker or his process. Even Hitchcock's imaginary conversations with serial killer Ed Gein end up being little more than a tease, a labored affectation that never earns its right to be in the film.

Despite all this, Hitchcock, much like last year's My Week with Marilyn, makes for some lively, if forgettable, entertainment. Gervasi keeps things light and piquant, finding just the right tone for both the drama and the humor, and attracting such superb actors as Michael Stuhlbarg, Kurtwood Smith and Toni Collette to minor parts. D'Arcy is disturbingly spot-on as the sexually guarded Perkins and Johansson is downright charming as Janet Leigh, capturing her unique mix of girlish vixen and no-nonsense movie star. The big surprise, however, is Jessica Biel as the cool-as-a-cucumber Vera Miles. Hers is the least developed and most intriguing role, hinting at Hitchcock's complicated relationship with his female stars. Watching their brief scenes together one wonders what kind of film Hitchcock might have been if it had chosen to throw caution to the wind and excavate the hidden recesses of the director's expectations and disappointments.

There is a brief moment in movie, when Hitch holes up in his study to thumb through a stack of head shots featuring blond starlets and we're left to wonder how sexualized his infatuations actually were. Is he using them as masturbation material? There would be something sad and adolescent about that fact. But the scene never commits and even if it did it never feeds into anything deeper. When you consider that the high water marks in Hitchcock's canon were films like Rear Window, Vertigo and Psycho, the reoccurring theme of voyeurism becomes clear. And yet, even here, Hitchcock fails to make a connection that goes any deeper than portraying the director as a naughty Peeping Tom. McLaughlin prefers tidy explanations and a playful tone to examination or provocation. Given Hitchcock's obvious pleasure in the discomfort of others, it hardly seems a fitting treatment of the master or his work.