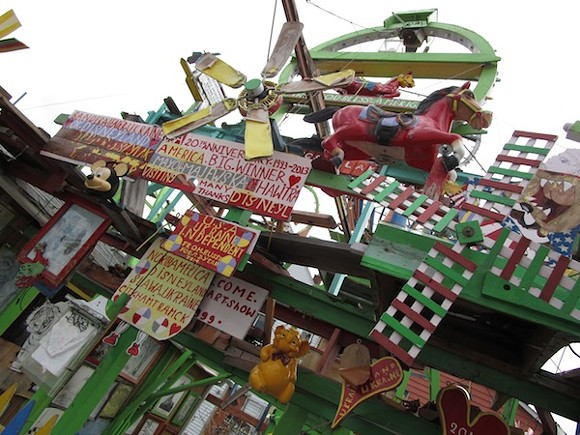 Hamtramck Disneyland, of course, is a bright collection of fanciful signs, models, and whirligigs that towers above two garages in Hamtramck. It was built by retired GM worker Dmytro Szylak starting in 1992. It has since become one of those iconic pieces of urban folk art, drawing selfie-shooting visitors from all over the world.

When Szylak died last year, the artwork’s future seemed to be in limbo. And the group of Hamtramck citizens trying to save it seemed to have every obstacle in front of them: A months-long wait as the properties went through probate, then a buyer asking top dollar for the homes, the deteriorating condition of the homes and the artwork, and more. For a small arts group with tight funding and no time to apply for arts grants, making a deal to buy the homes seemed like a longshot.

All of which makes Friday’s announcement, which apparently came from the real estate agent who represented Hatch, all the more surprising.

The way the deal was trumpeted in headlines in the daily papers (“Art group pays $100,000 to buy, save ‘Hamtramck Disneyland’”) oversimplifies the story a bit. As the articles eventually concede, a shoestring operation like Hatch doesn’t have money to purchase the buildings. It’s closer to the truth to say that the scrappy arts collective is on the hook for $100,000 after a clique of sympathetic investors bought the property with the intention of selling it to Hatch. One source with knowledge of the deal and comparable sale prices in the area said the price was probably about $20,000 higher than it should have been.

Chris Schneider, who has been with Hatch for more than a decade, tells MT, “We were a little surprised it actually came through, there were a lot of things that had to happen, and they did. … We had to [bid] significantly higher than we had originally planned.”

Schneider adds that, while the sale is good news, there’s still plenty to work out. There are four units in the two duplexes, and Hatch wants to rent three of the units out, and use the third as a combined gallery space and residence for visiting artists. The apartments will provide a steady income to repay the investors and fund upkeep for the properties and the artwork. But first there’s a fair amount of rehab work necessary first. One of the garages is on the verge of collapsing, and the artwork needs to be shored up after more than a year without upkeep and a number of strong storms. The group has to repair it all in time to welcome paying tenants to make good on the debt.

“All those stories that came out make it sound like it’s paid for and done. But we have to run it and operate it," Schneider says.

To that end, Schneider says you can expect to see a plea for help via crowdfunding, and the group will be applying for arts grants to help preserve the art and fund the artist-in-residence program.

“It’s exciting. It’s also kind of scary, taking on a big project and a lot of responsibility, especially when we know people are watching. So we want to do it right and keep the positivity and excitement that go with the place.”

Luckily, once the units are brought up to snuff, Hatch should have no problem finding tenants. Schneider says he has begun taking the names of people interested in renting them already. Naturally, renting the flats to artists would be appropriate, but Schneider says the group won’t necessarily only rent to artists.

Who’s the ideal tenant? “Somebody who thinks it’s cool to live right there, to tell people, ‘Yeah, I live at Disneyland,’” Schneider says. “I’m pretty confident we’d able to rent it to cool people.”

As for that fourth unit, where Hatch wants artists to say, they hope to attract artists who work in Szylak’s medium: That is to say, artists who create installations.

And so it seems that Szylak’s gift to Hamtramck will keep on giving, inspiring and challenging all involved, including its new owners, a fresh group of renters, artists from all over the globe, and anybody who happens to walk down the alley behind Klinger and Sobieski.