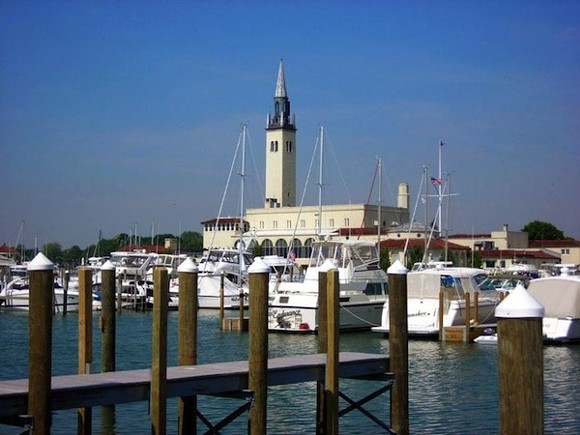 Photo of the Grosse Pointe Yacht Club's harbor by Matt K. on Yelp
From time to time, out-of-town visitors hit me up for a tour of Detroit's ruins. I suppose I'm a natural choice for a tour guide of our post-industrial wonderland: I've lived in Detroit a good part of my life, I know a lot of the "back roads" where some of the more out-of-the-way sights are, and I can be pretty free with salty commentary on how things got the way they are today.

That last part — explaining just how we got where we are – is something I think is especially important to any tour of Detroit's disinvested landscape. It's not enough to have your guests snap smiling selfies in front of the Packard Plant and say they saw industrial America at its nadir. It's equally important to understand that the plant hasn't produced Packards since 1958. In fact, it has been Packard-less longer than it ever was Packard-ed. And that has a lot to do with the postwar consolidation of the auto industry, which is part of that story of how we got here: a sort of prelude to the globalization that has left the Rust Belt behind.

It's important to see the whole picture, lest you miss the point. So when I take out-of-towners on a tour, I usually begin around Nine Mile Road and Jefferson Avenue, and then cruise along Lakeshore Drive until it turns back into Jefferson, before entering Detroit at Alter Road. It gives me about 15 minutes, enough time to explain to people from anywhere in the world that the Detroit area is not a poor area. It is one of the wealthiest areas in the world.

As we pass mile after mile of expensive homes, attractive shops and restaurants, and even the 187-foot tower of the Grosse Pointe Yacht Club, I explain to them that our municipal boundaries are drawn in such a way where the people living here do not contribute the significant taxes they pay to the central city. And why should they? They aren't residents of the city. They're in special municipal tax shelters created just for them. That's why they're living in some of the most desirable real estate in America right next to the poorest big city in the country.

And, conversely, it's part of the reason why Detroit is the way it is. Hemmed in by municipal boundaries and the "redlining" of insurance companies, forbidden to grow by the enshrinement of "home rule" in the state constitution, what happened to Detroit is no accident. It's the outcome of intentional policies meant to contain poverty and ensure the people who made their billions of dollars in the city never have to pay a dime of municipal taxes to help ameliorate the misery that pretty much ends at their border.

Thanks to these preparatory remarks as we drive down Jefferson, visitors from Germany, Scandinavia, and the UK are better able to understand why the other side of Alter Road looks like Europe after World War II. After one of my tours, my guests understand that there's plenty of money for good schooling, affordable housing, employment programs, and secure retirements in stable neighborhoods for all. They just spent 15 minutes looking at where the billionaires and millionaires live. Because I want them to understand that the system isn't broken; the system is working. This is what our system produces.

Because, while it would be nice to stamp out poverty, we need to keep our priorities straight. Such as ensuring the comfort of the most comfortable, and helping make sure those who have the most get to keep the benefits of affluence to themselves. In short: The city be damned, we need our pockets of immense wealth where the rich feel their proper reward. After all, it worked for the French aristocracy. (For a while, anyway ...)

That's why we're extremely pleased to announce that the 102-year-old Grosse Pointe Yacht Club has been declared the third-best yacht club in the country. See? Inequality does have its dividends!

And what a payoff: The ranking was awarded by the Platinum Clubs of America, recognizing the exclusive institution for its excellent amenities and facilities, the caliber of staff, the level of professional service, the quality of membership, and many other metrics. No doubt it wows people regularly with its Italian Renaissance clubhouse, built just in time for the Great Depression. These days, it sports updated dining rooms, three restaurants, a ballroom, a bowling alley, four bars, a modernized harbor, and a swimming pool.

So, congratulations, Grosse Pointe! Your wealthy enclave is home to one of the most luxurious private clubs in the United States. And it can all be enjoyed a few miles from some of the roughest, most fucked-up neighborhoods in the country.

But your enclave of wealth wouldn't have anything to do with that, now — would it?