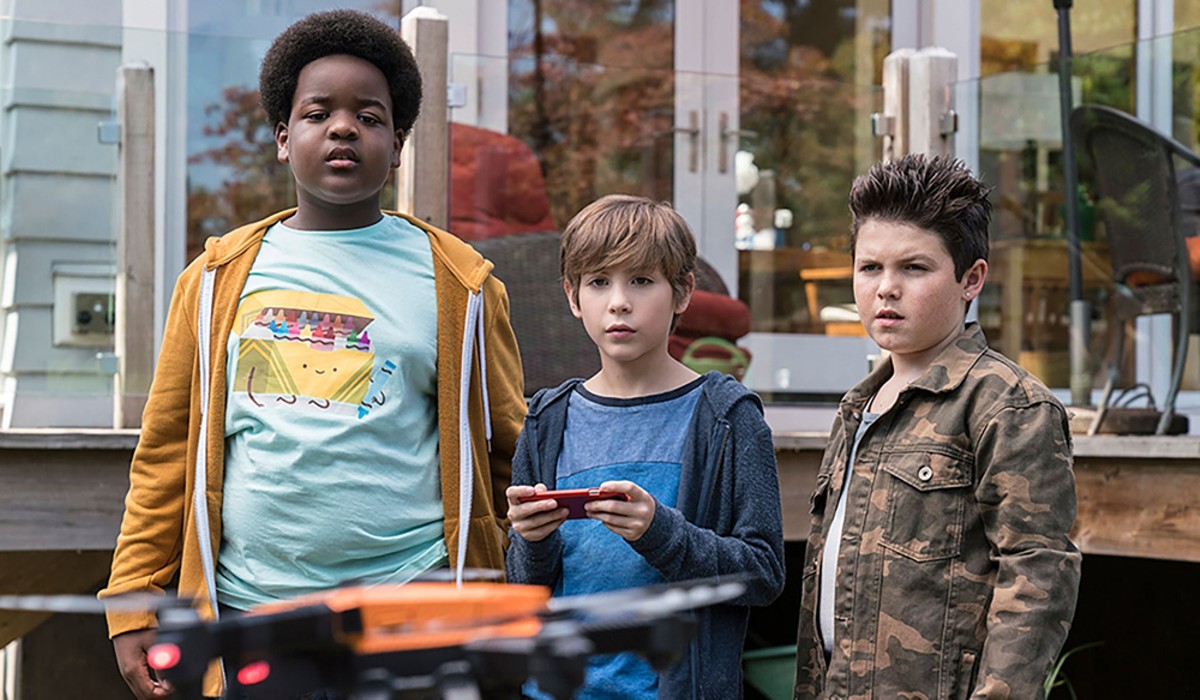 Parental alert! Good Boys, a day-in-the-life comedy about a trio of grade-school besties at that difficult moment right on the cusp of puberty, is absolutely not for children. In one of the film's wickedly amusing trailers, producer Seth Rogen — who does not appear in the film — informs his young cast that while it's fine for them to star in the movie, they are absolutely forbidden from actually seeing the movie. The film's ratings — R in the U.S. — is absolutely warranted ... at least by the industry's current metrics.

And yet Good Boys is much sweeter than I was expecting, and much more surprisingly innocent in its celebration of modern ascendant manhood. This is not a crass grossout, but a story that is genuinely kind to its young protagonists, and authentically understanding of their tricky positions as 21st-century kids trying to navigate a culture that doesn't much care to protect them from growing up too soon.

I'm genuinely stunned at how much things have improved, for instance, in the decade-plus on from the distasteful celebration of toxic male teenhood that was the also-Seth Rogen–driven Superbad. Good Boys is, well, supergood. (Rogen's recent wokeness — see also The Long Shot — seems actually genuine. They can be taught!)

Three sixth-grade boys (Jacob Tremblay, Keith L. Williams, and Brady Noon) spend a day bunking off school to vie against older teen girls (Midori Francis and Molly Gordon) — whom, thankfully!, they are not middle-school-romantically interested in — in a complicated plot involving drones, the mildest sort of party drugs, and making their way toward a grade-school "kissing party." Mostly it's about worrying that, at the tender age of 11, one might become a "social piranha"; securing consent to engage in any kind of physical contact with another kid; and ensuring that nothing one is doing constitutes bullying. These kids today, with their concrete physical and psychological boundaries! "We're not kids, we're tweens!" they declare, staking a claim on a developmental phase that we adults never even realized existed (LOLsob).

And so Good Boys becomes a provocative and unexpectedly sly challenge to our notions of what is suitable for children, and what isn't. The copious content related to sex and drugs — these are not oblique references, and there's nothing implied about any of it — are no more outrageous or shocking than what real children will be encountering in their curious considerations of and explorations in the adult world that is an inevitable part of growing up.

This is a clever skewering, too — unless it's an accidental one? — of modern Hollywood, which has no compunctions whatsoever of loading up even movies with no obvious audience beyond little kids with sexual innuendo, damaging stereotypes, and gleeful, consequence-free violence. Why is that OK for kids, but not directly exploring how such attitudes impact the real world they live in?

Did I say this movie wasn't for kids? Here's a caveat: Though it might constitute an enormous embarrassment to the children, Good Boys might be a movie for open-minded parents to watch with their older grade-schoolers, and to discuss the topics it broaches. If that's too much for parents, at least adults worried about These Kids Today can take some reassurance from this movie's depiction of kids who are handling a scary modern world in a way that's not just pretty OK, but probably downright healthy.