Send a News Tip
A brand new billboard has popped up in Dearborn Heights this week delivering the word of "God" (or at least the folks who run thegoodlordabove.com) to the good people of eastern Michigan: 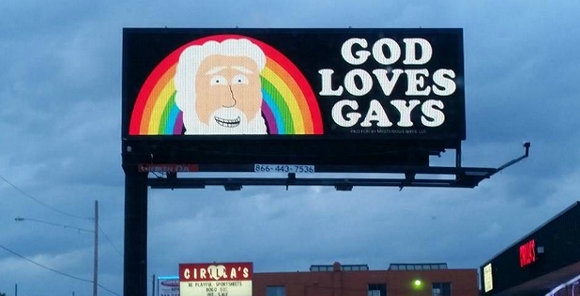 Screenshot the Good Lord Above
Located at 6850 N. Telegraph Rd., the billboard is a result of a national fundraising effort to spread goodwill across various U.S. cities, and to "show everyone that all humans are equal and loved by God."

There are so many young LGBTQ kids who face daily bullying just for who they are. Sadly all too often LGBTQ teens take their own lives due to the extreme lack of acceptance they face from their family, religious institution, or bigoted bullies. It is extremely important that this message of love is spread throughout the world.


Dearborn Heights is the third city to receive such a billboard (others have been spotted in Orem, Utah and Salt Lake City, Utah), but what makes Michigan's message all the more potent is that it's plastered on the same digital billboard as restrainthejudges.com, a devoutly anti-gay organization:

Screenshot the Good Lord Above
God's pretty pumped about it:

WOOHOO! Today we got a billboard up in Dearborn Heights, Michigan! It's rotating on the same digital billboard as one of those awful anti-gay messages. HOMOPHOBE SMITE!

Keep tabs on additional billboard locations and donate to the cause right here.

Alaina Nutile is a Web Editor who oversees all digital content and social media initiatives for Detroit Metro Times and Cleveland Scene Magazine. Previously, she interned at Business Insider in New York City, and at La Hora in Quito, Ecuador. Alaina is a graduate of Kalamazoo College where she double majored in...
More
Scroll to read more Arts Stories & Interviews articles
Join the Metro Times Press Club