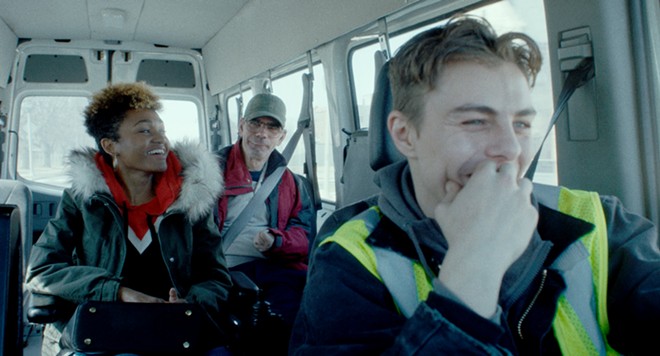 For the better part of Give Me Liberty — the quiet and chaotic independent film based on director Kirill Mikhanovsky's real-life experiences as a medical transport driver in Milwaukee starring unknown actors and real people — the viewer, and many of the film's characters are bound to a van.

Give Me Liberty, which reportedly received a 10-minute standing ovation at the 2019 Cannes Film Festival, centers on empathetic, record-collecting Milwaukee disability transport driver and Russian-American, Vic (Chris Galust) who is running late for his daily roster of pick-ups and drop-offs. Among his obstacles are road closures, protests, a talent show, a funeral, his Russian-born grandfather, and his friends who are running late for the aforementioned funeral, and Tracy — the wheelchair-bound woman with ALS, played by real-life disabled influencer Lolo Spencer, who just wants to get to work on time.

According to one of the film's producers, Mike Manasseri, much of the frenetic watching-of-the clock momentum and anxiety which propels the film is a product of making the film itself.

"You spend the movie in the van," he says. "This movie is all about controlling chaos and the chaos needs to be there right under the surface. This was the most difficult film I've ever had the pleasure of producing. Just making sure we were sensitive to the areas that we were in and the people that we were dealing with. And not just people who were either disabled or blind or in a wheelchair, but even our older Russian choir members who were all in their eighties and having them sitting in a van for hours on end and dealing with their schedules and making sure that they made their doctor's appointments in the morning."

"And at the same time while we were making it, I mean, it was a battle every single day to get what we needed," he said. "During that battle, we knew we were making something special."

Manasseri, who relocated to metro Detroit more than a decade ago to be closer to his family as well as take advantage of the state's then-offered tax incentives, describes the film is a microcosm of the American dream that really forced him and the film's crew to embed themselves within a community that has not been represented in the mainstream — at least not in an earnest and non-exploitative sense, which Give Me Liberty accomplishes by celebrating the beauty of inner-connectivity, the power of shared struggle, and the simple victories like getting to perform Bruce Springsteen's “Born in the U.S.A” at the community center's talent show.