For some Detroiters, Kwanzaa is a yearlong practice

Elaborate African masks decorate the walls and ceilings around rows of bookshelves in a dimly lit store that smells of incense. As a woman dressed in a brightly colored African print lights a candle on her kinara, she tells us, “there’s a lot of positive energy in here.”

It’s the fifth day of Kwanzaa, which celebrates the principle of Nia, or purpose, when we visit Highland Park’s African-centric bookstore Mama Nandi’s Knowledge Cafe. It’s quiet when we first arrive to chat with owner Mama Nandi, who’s dolled up in red lipstick with her locs piled in a neat bun atop her head. But as time goes on, community members gather at the store like it’s a family reunion. They share space, plan programs for local children, and laugh. It’s the essence of Umoja, or unity, the first principle of Kwanzaa. 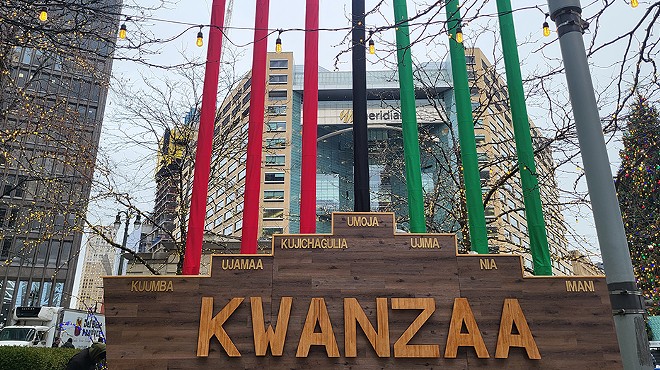 How Detroit got the world’s largest Kwanzaa kinara: The new tradition came together thanks to ‘the best of the professionals in Black Detroit’

“You know, I was studying our culture and it just made sense. Christmas never did make sense to me as a child,” the elderly woman tells us in a raspy voice. “My mother never really celebrated [Christmas] like that either. She actually did it like Kwanzaa, she just didn’t know it. I think most older Black people back then did. People who were enslaved would make their gifts and talk about what they planned to do for the next year in terms of putting their money together and things like that, and those principles still exist today.”

Lee DeVito
Detroit made history this year when it celebrated the start of Kwanzaa with the world's largest kinara.

Olujimi is another community elder and leader of the Afrocentric jazz group In the Tradition. We chat over the phone about the significance of the Nguzo Saba a day ahead of the band’s Kwanzaa celebration at Aretha’s Jazz Cafe.

“I’m a staunch Pan Africanist for one, and I feel that the enslavement experience robbed us of our culture, our values, our principles, and precious aspects of our African characteristics,” he says. “As you can see right now, due to external pressure and internal pressure, we’re doing some very deadly and dangerous things to each other. And I think this celebration goes a long way in helping us return to loving each other. Those values have always been in us and we need to recover those.”

Instagram, @mamaayi1
Years before downtown Detroit got a large-scale kinara, Mama Nandi’s Knowledge Cafe celebrated with its own DIY one.

Several years before the 30-foot tall kinara (reportedly the world’s largest) joined the massive Christmas Tree and Menorah in downtown Detroit’s Campus Martius Park, Nandi’s put a six-foot-tall DIY kinara outside the store with PVC pipes as the candles.

“You know, that kinara downtown was really her idea,” Mama Nandi says, gesturing to another community member Mama Ayi with a laugh. “She said to me, ‘We need a six-foot candle holder out in front of the store!’ So we made a big ole’ kinara. We had upcycled these big tube water pipe things and we stuck them on crates and spray-painted them red, black, and green. She told the [Charles H. Wright Museum of African American History] they should put one out there too.”

“Whether it’s one person or 20 people, the energy is always good in here,” she says. “I light the candles every day and we just talk about the seven principles and get a good vibe going. Sometimes people are just coming, not for Kwanzaa or anything, and I get their attention and explain what Kwanzaa is about. I always get a person who’s like, ‘That’s exactly what I needed.’”

Though her modest Kwanzaa setup is tiny compared to the downtown kinara, her loving presence and spirit fill the entire store, embracing everyone who walks through the doors. Her dedication to educating the younger generation about Kwanzaa and African spirituality is paramount.

“I have to keep them focused and I have to teach them who they are and where they come from,” she says. Gesturing around to the masks covering the store’s interior, she continues, “We used to look at African art as some type of heathenism or something ancient, so I teach young people about the masks and the energy that they’re feeling in here. We also have an altar that took us three or four months to build.”

Haters will say Kwanzaa is a made-up holiday, but aren’t all holidays technically made up? The significance of Kwanzaa is that its principles of unity are building blocks for a community that people like Mama Nandi and Olujimi carry with them beyond the holiday. It’s a way that Black Americans can reconnect to the African roots they were forcibly removed from. The holiday may be “made up,” but the people who celebrate it are only trying to return, in a sense, back home.

“As I became more immersed in activism, I began to realize that there was something missing,” Olujimi says about his journey embracing Kwanzaa. “I realized that in our conscious lives every day, we were missing things that the oppressor culture tried to erase. We were missing our African selves, our loyalty to each other, and the protection of our women and children due to the overbearing weight the capitalist system had imposed on us. If anyone should be against capitalism, it should be us, because it was our blood and free labor being spread around the world that spread this system.”

Olujimi has been celebrating Kwanzaa for about 25 years, and In the Tradition has been around for nearly 30. The first time he celebrated Kwanzaa, he says it gave his family a sense of “completeness.”

“It was in the late ’90s when my parents were both still alive,” he recalls. “I had studied the principles and attended some events and had finally acquired my own kinara. I lit the candles on the days of each principle and I had other siblings and nieces and nephews come over and just spend time together. It just brought this sense of doing something of our own that we could possess instead of mimicking the oppressor holidays.”

Courtesy photo
In the Tradition. Olujimi is pictured in the center.

Mama Nandi works tirelessly to bring her community together and educate the youth. The knowledge cafe hosts a poetry night on Thursdays, reggae night on Saturdays, and a tribe talk where young people come together for open and honest conversations on Tuesdays. Nandi’s is also running a seven-day youth program through Read Art Loud that fosters children's literacy through art, theater, and books.

It’s clear her work has had an impact on the young people who gather there to celebrate life and each other.

“It’s been a wonderful experience for me. I love performing with everybody,” she tells us at the cafe. “You learn a bunch of different things from your elders. I remember just yesterday there were so many uplifting things that they taught us, and you learn more with each principle each day. Today is Nia, so I learned my purpose in life, and I know I want to entertain people”

“The holidays usually unite everyone which is really great, but Kwanzaa especially unites our community as a people, brings us together, and gives us a purpose,” says Issac Ryan Brown, another young performer. “It just gives us a reason to get out and be with each other, support Black businesses, and showcase our talent. You got people performing and doing things all over the city of Detroit, so it’s beautiful to see.”