Two astronauts in a real pickle 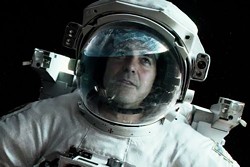 Edge-of-your-seat action sequences alternate with the poetry of looking down at our planet in Gravity.

The hype is mostly justified. Alfonso Cuarón’s Gravity may not have any profound statements to make about the human will to survive, and its character development may be distractingly sentimental, but as a cinematic experience it’s hard to beat. In fact, it may be the most thrilling, transporting and unbearably stressful 90 minutes in the theater you have ever experienced.

Opening with a stunning 15-minute shot, we’re introduced to astronauts Matt Kowalsky (George Clooney) and Dr. Ryan Stone (Sandra Bullock), floating 600,000 feet above the Earth as they repair the Hubble Telescope. Kowalsky is a retirement-bound veteran shuttle pilot who regales his colleagues with tales of past exploits while scooting around on his jetpack, playing country-Western tunes. Stone is the nervous rookie overseeing the telescope’s data upgrade. Clumsy in her unwieldy spacesuit and struggling to hold down her last meal, she tries to tune out Kowalsky’s incessant banter and focus on the task at hand — no easy job given that the full grandeur of Earth as seen from space offers a sweeping, breathtaking spacescape.

It’s a lighthearted, joyously banal sequence that establishes the workaday rapport that exists between the crew. For us on Earth, it’s a rare and spectacularly mesmerizing glimpse into the world of orbital travel. For them, it’s another day at the office.

That breezy, placid mood is suddenly shattered as mission control reports the detonation of a Russian satellite, half a world away. Debris is bearing down on Hubble, traveling at thousands of miles per hour. From this moment on, Gravity becomes an extravagantly conceived and brutally intense disaster movie, immersing the audience in the lyrical magnificence and dizzying terror of outer space.

The film’s chain reactions of destruction and zero-gravity catastrophe are as stunning to watch as they are harrowing to experience. Cuarón luxuriates in virtuoso long takes that capture the infinite loneliness of the void and the low-oxygen claustrophobic helplessness of watching as shrapnel-like pieces of machinery fly toward Bullock’s face. This is what 3-D was made for, and Cuarón establishes its high watermark. Gravity’s optical wonderland not only sends objects off the screen and within our reach but heightens the physical distances that lie between astronaut and salvation, raising both the stakes and our heart rates. It also allows Cuarón to indulge in moments of three-dimensional poetry, as when Bullock’s tears gently float away from the screen. These moments are far more effective than his labored visual metaphors of rebirth.

Gravity’s sound design is equally revelatory, magnifying Bullock’s desperate and terror-filled gasps for air, then taking us into the dreadful silence of sound-deadening space. Steve Price’s bass-heavy score is the perfect match, complementing the action with its heart-thrumming rhythms.

This is lean, mean plotting at its best, a ruthless exercise in “the good news is, the bad news is” storytelling. Streamlined and taut, Cuarón (who penned the script with his son Jonás) expertly doles out brief moments of calm before the next unpredictable calamity strikes.

Bullock, who is front-and-center for most of the movie, delivers the emotional and physical goods as a woman who has nothing to live for fighting to survive. Saddled with a maudlin dead-child backstory, she sells the script’s hokier moments in an impressively restrained performance. It’s made all the more impressive when you consider that it’s essentially a one-woman show played against an empty green-screen.

Clooney’s calmly sarcastic and self-deprecating commander, on the other hand, plays directly into the actor’s laid-back charms; he’s amusing and reassuring in equal doses — exactly the guy you want yapping in your earpiece as you float helplessly through space.

As an instance of populist filmmaking, Gravity is as good as it gets: teeth-clenchingly intense and gloriously immersive. But as an instance of art, the conventionality of its spiritual aspirations deny it true classic status (The Life of Pi had similar shortcomings). Nevertheless, I defy anyone to deny the gut-wrenching impact of its weightless action sequences or the visceral profundity of its earthbound final moments. Cuarón demonstrates that cellphone screens and tricked-out home theaters are no match for his big-screen artistry.

PG-13 and has a running time of 90 minutes. (It’s also going to make boatloads of money.)