The family vacation is a cover for this motley crew of misfit drug mules who only look like the Griswolds of yesteryear’s Vacation movies. 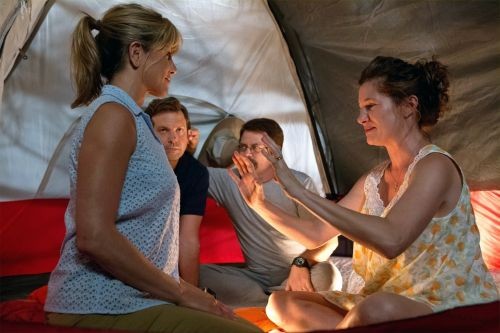 Comparisons to Chevy Chase may sound like an insult these days, but trust me, there was once a time when that was a huge compliment, so I mean no disrespect to Jason Sudeikis when I say he’s firmly walking in Chase’s klutzy footprints.

Like his SNL forebear, Sudeikis excels at playing smug assholes that remain charming despite of their chronic self-absorption. Now, as a dope dealer posing as a family man, he manages to successfully fuse Chase’s trademark roles of slick big city wiseacre and oblivious suburban dad.

We’re the Millersputs a fairly clever spin on the family vacation comedy picture by making said “family” not blood relatives but a hastily assembled collection of drug mule deadbeats posing as the friendly, nuclear unit composed of J. Crew models.

Sudeikis plays ambitionless, small-time dope dealer David Burke, a dude content to drift along while many of his peers have moved into adult domesticity. He’s callow but sweet, and when he extends himself to help break up a mugging, he’s jumped and his “stash” is promptly swiped by a group of street punks.

Now in arrears to his supplier (an especially obnoxious Ed Helms), David is forced repay the debt by picking up a “tiny smidge” of weed from Mexico by smuggling it through U.S. customs in a plus-size RV — though he’s promised a huge payday for his effort.

Needing a fake family for cover, David recruits a band of misfits from his apartment building, including a clueless dweeb (Will Poulter), a snarky runaway (Emma Roberts) and Rose (Jennifer Aniston), the veteran stripper down the hall who won’t give him the time of day. Predictably, they all squabble to begin with, but as the mission progresses and the danger deepens, this oddball crew begins acting like a real, deeply dysfunctional family.

While uneven at times, We’re the Millers is surprisingly funny. The material is raunchy but not crass, the satire is sly, and Sudeikis and Aniston, who worked together in the similarly sharp-edged Horrible Bosses, display real comedic chemistry.

It helps that such ace support players as Luis Guzman, Nick Offerman and the delightful Kathryn Hahn back them up. Even the obligatory credits outtake reel is a treat, including a sweetly silly prank on Aniston.

As with any Jennifer Aniston project, there has been the customary torrent of pre-release hype about how she got into such fabulous shape for her revealing striptease scenes. There are gratuitous sequences where the movie stops to drool over Aniston’s finely toned fortysomething bod while she does a slow-mo bump-and-grind in her skivvies.

How long she can maintain this little peek-a-boo routine is anyone’s guess, but if she picks better scripts like this one, and keeps honing her comedy chops, I wouldn’t bet against her.

We’re the Millers is in theaters now and is rated R with a running time of 110 minutes. Watch the trailer here.