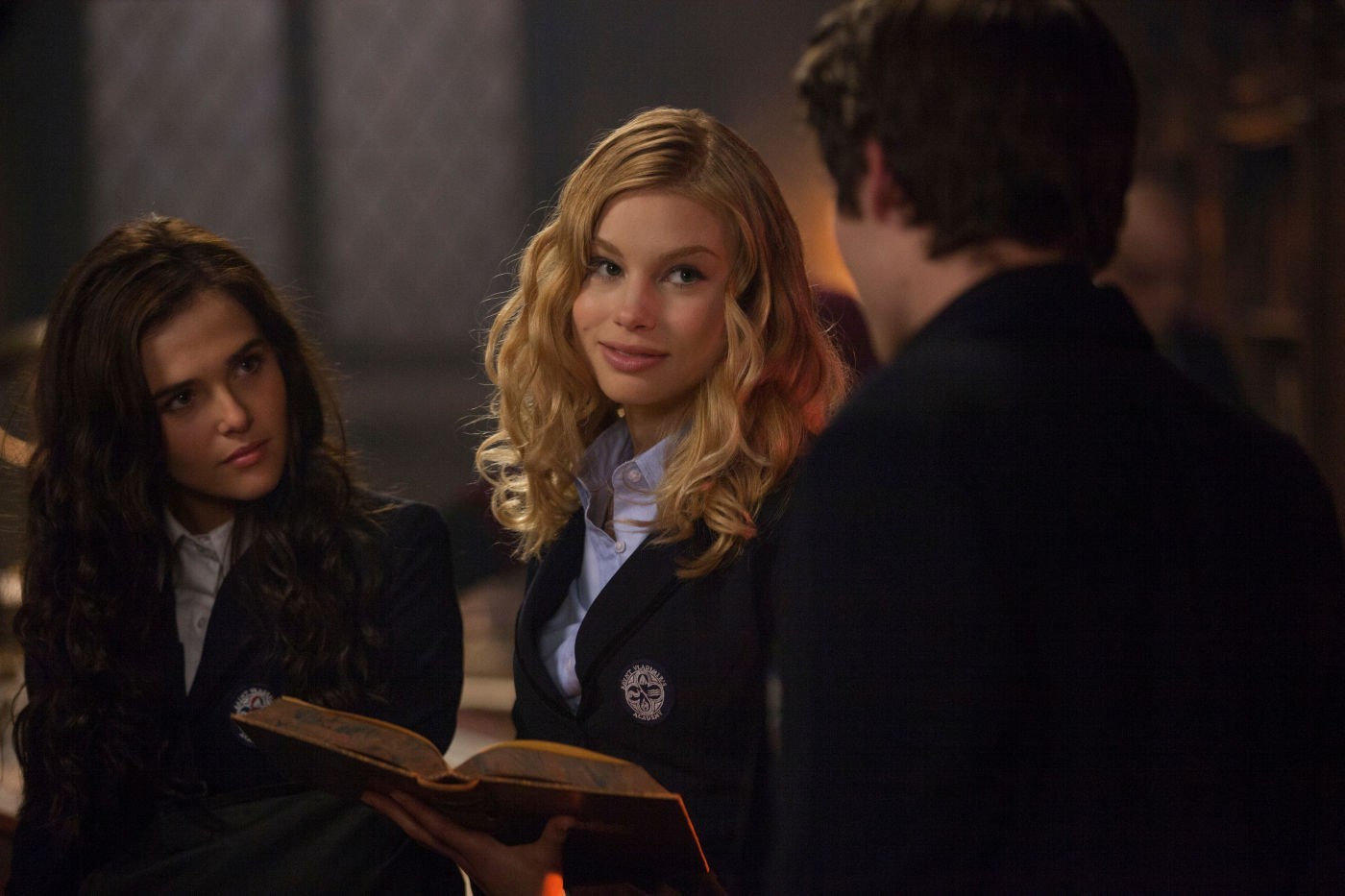 The graveyard of failed teen fantasy movie franchises is ready to receive a new headstone, as this shamelessly derivative but deliciously trashy Harry Potter/Twilight knock off arrives at the multiplex D.O.A. Based on yet another of the wildly popular “Young Adult” novel series’ that nobody with a mortgage has ever heard of, Vampire Academy layers oceans of exposition about warring undead clans onto a labored metaphor about hormonal impulses.

Even a seasoned trivia hound will have a hard time wading through the deluge of back-story and mystical mumbo jumbo that washes over the movie’s disastrously overloaded first half hour. We’re introduced to seventeen-year-old Rose Hathaway (Zoey Deutch) and her BFF Lissa (Lucy Fry), who are hiding out after running away from their secluded, elite private school, “St. Vladimir’s Academy.” Rose isn’t just Lissa’s study buddy, but she is her sworn protector/indentured servant, a half-breed called a Dhamphir. Her lithe blonde chum is the rightful heir to a royal family of semi-benevolent magical vampires called the Moroi, who are under constant threat from a far nastier breed of bloodsuckers called the Strigoi. Hopefully you took notes, as the steady stream of lexicon, mythology and attempted explanations just keeps coming at a merciless pace. I can’t speak for Richelle Mead’s novels, but I’m assuming they read like the instruction manuals for a role playing game: there are both too many, and not enough, rules.

Occasionally, when the girls aren’t babbling on about undead gobbledy-gook or exchanging pop culture references, they take a breath to talk about cute boys they like. Once they get back to school, and we’re introduced to a platoon of disposable classmates, rivals, love interests and embarrassed veteran actors like Gabriel Byrne, the exposition kicks into hyper drive. Feisty and snarky Rose returns to  combat training, under the watchful eye of older Dimitri (Danila Kozlovsky), who is not just a highly skilled fighter, but a tall, dark and mysterious hunk to swoon over.  Meanwhile the vamp scholars are expected to pick a major in some form of elemental magical discipline; fire or earth etc, because presumably mastery of all the traditional vampire abilities just weren’t enough to show off the modest effects budget. This sort of excessive super power nonsense plagued the Twilight series; where they all turned into mopey, pasty faced X-Men by the last installment.

It’s all a bit too much for director Mark Waters and his screenwriter brother Daniel Waters to handle. Fans might have been encouraged that these gents resumes contain gems like Mean Girls and Heathers, but don’t get too excited; these are also the guys that made dross like Mr. Popper’s Penguins and Hudson Hawk. In fact, Mark helmed 2008’s The Spiderwick Chronicles, another intended franchise starter that went nowhere. Vampire Academy is too burdened with attempted hit making ambitions to make its garbled, explanation-laden story work, though it’s frantic, chaotic tone gives it the fun unpredictability of “good” bad movies. Ms. Duetch (daughter of Lea Thompson) does a credible Anna Kendrick impression, but everyone else is too busy rapidly spitting out their dialogue. It’s hard to speak when you’re sucking this hard.

Vampire Academy is rated Pg-13, runs 104 minutes and is in theaters now.