A hit man who hid his life of crime from his family gets the biopic treatment, with lackluster results. 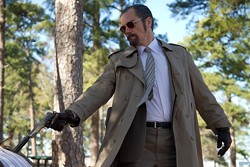 The fundamental problem with most biopics — even biopics about sociopathic killers — is that they remain tethered to a this-then-that chronology, tracing a predictable rise-then-fall narrative. From Ray to Walk the Line to J. Edgar and scores of others, these actor showpieces tend to boast Oscar-worthy central performances but provide few insights or revelations about their subjects. Ariel Vroeman’s The Iceman is no exception.

Though Michael Shannon bears little resemblance to the murderous mob enforcer and loving family man Richard Kuklinski made famous in a pair of HBO documentaries, the actor brings a brooding, can’t-take-your-eyes-off-him performance that elevates stony stillness to a mesmerizing art form. Simultaneously simple yet unreadable, Shannon conveys the contract killer’s utter detachment from humanity, providing a mute but menacing presence that wastes few words or emotions. Kuklinski is all mask and no soul, a monster who struggles to disguise himself as a man.

Shot with a post-Watergate, Serpico-esque aesthetic, The Iceman follows Kuklinski over his two-decade career as aN uncompromising hit man, reportedly executing more than 100 people in and around New Jersey. But that’s not what makes him so unusual. Instead it’s Kuklinski’s unnerving ability to compartmentalize his homicidal activities, hiding his true nature from his adoring wife (Winona Ryder) and daughters. A dedicated suburban family man, he pretends to be a successful currencies exchange investor to his family and neighbors even as he drives away each morning to commit his next horrific deed. But despite his extremely cautious nature, his precariously balanced worlds become threatened when his boss, gangster Roy DeMeo (Ray Liotta), is sent to jail. Desperate to earn enough money to maintain his family’s lifestyle, he teams up with a freelance killer named Mr. Freezy (Captain America’s Chris Evans) and earns the wrath of his mob employers. Of course, things begin to unravel as the ever-paranoid Kuklinski makes increasingly bad decisions.

In a story rife with dramatic possibilities, it’s the scenes between Mr. Freezy and the Iceman that paradoxically generate the only heat. Shannon and Evans find a macabre rapport between their characters. It’s a brief glimpse at what Vroeman’s occasionally stylish film might have achieved had it endeavored to explore and understand rather than simply chronicle Kuklinski’s misdeeds. The script, which Vroeman wrote with Morgan Land, never peels back its subject’s outer layers to reveal the man beneath. Nor does it find anything new or interesting to say about his brutality. We witness 20 years of the Iceman’s deranged life and yet the only thing to mark the progress of time is a change in fashion and facial hair.

In particular, the film flubs its most promising plot thread — the relationship between Kuklinski and his wife Deborah; she and the daughters are the least developed characters in the film. Ironically, Vroeman takes the time to flesh out the Iceman’s sleazebag colleagues. James Franco, Stephen Dorff, Robert Davi and David Schwimmer all make strong impressions as fellow criminals and soon-to-be victims. It’s not enough. The relentlessly dour film brings with it no surprises or suspense. Yes, the violence can be disturbing, but the story never elicits any drama, shock or dread. It’s too opaque and matter-of-fact to pull us into the madness of Kuklinski’s worldview.

In the end, The Iceman is too insubstantial to chill its audience and too lukewarm to capitalize on the boiling madness that seethes beneath Shannon’s icy exterior. mt