Sprinkle of Evil, Dash of Bedlam 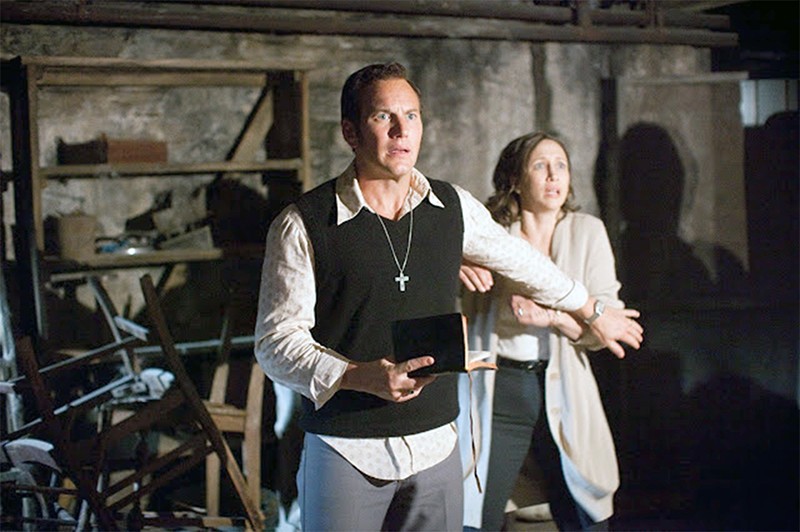 The elements of a good haunted house movie are elemental: Creaky floorboards, banging doors, whistling winds, dank, dark basements and creepy household objects that shuffle around while nobody is looking.

The Conjuringsports all of those old-school tricks, along with a host of more visceral jolts — including levitation, hanging, rusty scissors, raven attacks — and a freaky-looking possessed doll.

All these shocks and more are presented slyly, with a canny mix of titillation and payoff that is perfectly calibrated to send shivers up the spine of any moviegoer eager to be scared out of his wits.

If you want thrills and chills, you’ve come to the right spot, which, of course, is the rub in this efficient but still hokey fright flick. When you plunk down your hard-earned bills for a night of popcorn-assisted terrors, the presumption is you’re willing and ready to be frightened; performing an act of contrition to the scary movie gods.

For those crotchety, “seen it all” skeptics (including many film critics), who are overly familiar with the working mechanisms of the genre, it may be more difficult to accept the overstuffed bag of tricks we’re being sold.

The story is based on an allegedly “true incident,” and is steeped in a sun-faded, gritty ’70s ambience that is perhaps a little too on-the-nose with the period detail.

Supposedly, the plot is drawn from the most disturbing case files of real life husband-and-wife team Ed and Larraine Warren, who were probably the most prominent paranormal investigators of their time.

They were responsible for popularizing the Amytiville Horror incident, a debunked haunting that made for a hit movie, but also dubious science.

The eerie couple is generously played here by the comely duo of Patrick Wilson and Vera Farmiga, who use their good looks and special skills — she’s psychic, he’s a devout Catholic but also a master “demonologist” — to bust ghosts.

The Warrens’ latest mission involves a blue-collar family whose new house apparently has a disturbing legacy. Worried parents Carolyn and Roger Perron (Lili Taylor and Ron Livingston) are out of answers for all the strange, unsettling occurrences that are keeping their five daughters up at night. The investigators are convinced the home is infested with malevolent spirits, and not only the ghosts of murdered previous inhabitants, but, as Ed suspects, “something inhuman and foul” that is trying to access our world.

Eventually, after long, tedious stretches of exposition and fiddling around with doors and windows slamming shut, the wicked things make their intentions plain, making for a nerve-wracking, action-packed finale.

That ending is satisfying enough; though hardcore horror fans will recognize the signposts down the road. Hey, is that the drowned girl from The Ring? Or, is that a possessed Linda Blair in a nightie lurking above the dresser? Is that the hanging victims from last year’s Sinister?

The list of imagery “borrowed” from other films is lengthy. Director James Wan specializes in this sort of fare (see: Saw, Insidious) and his talented cast elevates the material above the dregs of the genre, which is an admittedly big and crowded basement.

If we’ve learned one thing from scary movies, it’s to stay out of the basement.

The Conjuring is in theaters now and is rated R with a running time of 112 minutes.