Liam Neeson tries to catch a killer on a plane (but only when the seat belt signs are turned off). 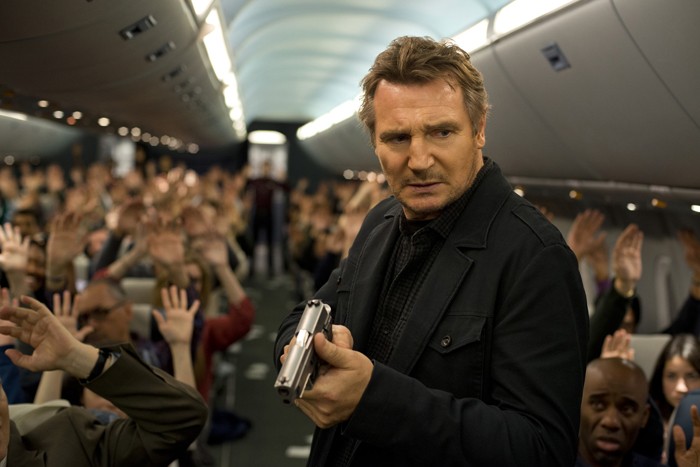 Courtesy photo.
When I say that I want my little bag of pretzels now, I mean NOW!

U.S. Air Marshal Bill Marks, played by an especially grizzled-looking Liam Neeson, slumps behind the wheel of a parked rental car, grimaces, dumps three fingers of whiskey into his coffee, stirs it with a tooth brush, stares longingly at a photo of a loved one, and then with a resigned grunt, lumbers off to complete his latest assignment. This is a decent setup for a thriller but also an effective meta-commentary on the state of Neeson’s late career resurgence as an action hero. Hits like the paranoid revenge romp Taken have re-energized the lanky Irishman’s star, established him as a middle-aged ass-kicker par excellence, and inspired inferior knock-offs like Kevin Costner’s 3 Days to Kill. Surely by now Neeson must be growing weary of the formula.

Make no mistake, this newest Liam joint is a very by-the-numbers affair, but one that delivers cheesy shocks and jolts with the predictability and efficiency of a veteran flight crew doling out ginger ale and tiny bags of pretzels.

The action is almost totally confined to a NYC-to-London red eye, aboard the fictional “British Aqualantic” airline, which would be a pretty swanky way to travel if not for the impending doom. Marshal Marks doesn’t seem too keen on flying, even though it’s his job, and he girds himself for yet another bumpy takeoff by downing a bit of “Irish courage,” which of course, is just courage to him, as he was born in Belfast. Having told an overly friendly seatmate (Julianne Moore) the backstory of the lucky ribbon his young daughter gave him, Bill settles in for a routine night at the office, until an unknown lunatic starts sending the groggy Marshall threatening text messages. In classic movie-villain style, the invisible hijacker intends to kill one innocent passenger every 20 minutes unless the feds wire $150 million to an offshore account.

Making matters worse, the crafty criminal seems to have done his research on Bill, making this deadly contest of wills into a very personal gauntlet for the hero to run. The race is on to identify the bad guy, to prevent the rabble in the cheap seats from rioting, and for the unsettled lawman to keep his wits about him as the danger mounts.

Just about anyone with more than three lines of dialogue is a suspect, and the script, by John W. Richardson and Christopher Roach, does a solid job of keeping the mystery alive by switching suspicion back and forth between a variety of likely and unlikely suspects, with the little girl clutching her stuffed Paddington Bear being the only one we never suspect. There are probably a few too many obvious shots of Moore’s being nosy and seeming oddly twitchy. She’s got second billing, and Neeson needs somebody to throw a blanket over at the end as they slowly walk away from the chaos.

When the villain’s plot is finally revealed, they present a motive so absurdly simplistic and weirdly jingoistic that it might make even Sean Hannity choke on his Milk Duds. After a good start, Non-Stop gets progressively sillier and more unbelievable, though the compulsively watchable Neeson lends this fluff some much-needed gravity. The cramped setting keeps the stunt quota down, (Liam never has to throw a kick) though the still physically imposing star pulls off a nifty fight scene in an airplane lavatory, which is impressive for anyone, let alone a 6-foot-3 sixtysomething.

If you want to rest your brain for a while, the movie offers an appetizing plate of thrills, chills and even a few giggles, especially when the laws of aeronautics and physics get slapped around like they took something. Have fun, just don’t expect to see this one as an in-flight selection.