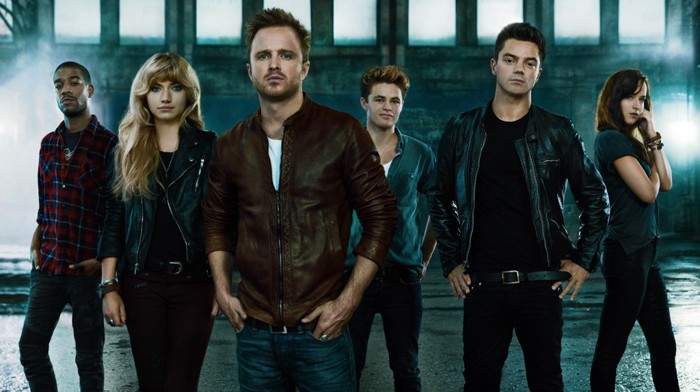 Car culture hits the skids in this amusing but empty attempt to cash in on the megabucks generated by the Fast and the Furious franchise. Need for Speed bears the terrible burden of being based on a video game, but is not blessed with memorable or even vaguely familiar characters that anyone but diehard gamers could identify. The cars are the real stars here; with an auctioneer’s catalog of ultra-high-end Lamborghinis, McLarens, Bugattis and other dream machines being bumped, spun out, set aflame and flipped through the air with a recklessness that would make an insurance adjuster weep.

The flick is anchored by Breaking Bad star Aaron Paul, who brings a level of commitment and intensity to even the goofiest moments, playing blue-collar hero Tobey Marshall, the greatest racing legend that never was. Tobey had all the driving talent, but his insufferably cocky classmate-rival Dino Brewster (Dominic Cooper) found the financial backing to make it out of their dinky upstate New York home and onto the pro circuit, bolting town with Tobey’s girlfriend (Dakota Johnson) in tow. Dino the showboat rolls back into sleepy Mount Kisco looking for help fixing up a rare Shelby Mustang prototype for resale, but even though they’re working together, the old enemies can’t resist engaging in an insane street race, one that ends with fatal results. A guilty Dino speeds away, and, despite a lack of evidence, Tobey takes the rap for the crash. When he gets out of the joint two years later, he’s raring for revenge. He gets his chance via an ultra-secret illegal underground race called “The De Leon,” hosted by a mysterious billionaire head case turned Internet DJ who calls himself “Monarch,” played with spastic abandon by Michael Keaton, who must have put in a grueling two days of work phoning in his wild, spittle-soaked, quasi-mystic carnival barker routine.

Up till this point, the movie has simply been spinning its wheels, but Tobey has only two days to enter the big race in San Francisco, forcing him to haul ass across country, dodging police and bounty hunters at every turn. Riding shotgun is the evocatively named Imogen Poots, an off-kilter blonde beauty with a nose like a ski slope and legs like a gazelle; their breezy romantic chemistry is a pleasant bonus. Tobey also has a small support crew, including rapper Scott “Kid Cudi” Mescudi, who serves as an aerial spotter, but whose wisecracks never really get off the ground.

Fittingly, the Motor City gets an extended cameo, with Tobey doing laps around Campus Martius’ traffic circle, and finally giving the coppers the slip by leapfrogging three lanes of traffic on Jefferson. Downtown Detroit actually looks spiffy, but the movie zips right past the rest of fly-over country, as it zooms to the finish line.

Stunt co-coordinator turned director Scott Waugh does a solid job managing the choreographed carnage, if not the drama and ample logic holes. Example: The prize of the De Leon is the pink slips of all the cars in it, but in order to win, the racers start knocking each other off, thereby destroying their own profits. The endless burning rubber gets old fast, and as impressive as the practical driving effects are, they’re also irresponsible and idiotic.

Need for Speed is rated PG-13, has a run time of 130 minutes and is in theaters now.