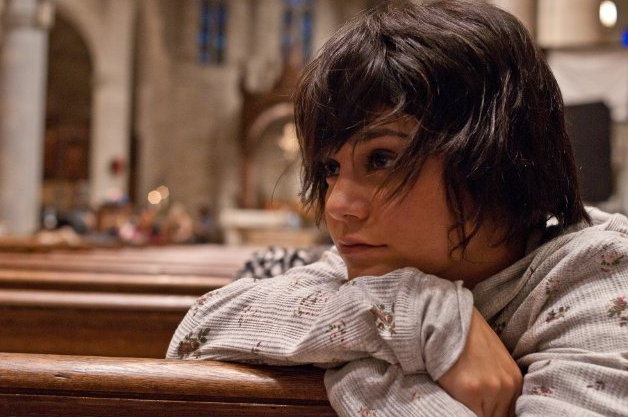 Sparkly vampires, boy wizards, giant robots and demonically possessed dolls; these are all things you are far more likely to see in American films than a teenager having a safe and legal abortion. Gimme Shelter is a very well-intentioned but clumsily executed weeper, the latest bit of Catholic liturgy cannily disguised as an inspirational tearjerker. You know going into the multiplex that hearts will be warmed, eyes will grow misty, and the tacit moral authority of the mainstream will not be challenged in the slightest.

Vanessa Hudgens continues her attempted Pinocchio-esque transformation from plastic Disney product to a relevant, respectable young actress, a process that took a necessary but bizarre detour with last year’s gonzo sex-and-guns train wreck Spring Breakers. This effort is more conventional, and affords the previously princess-like Hudgens the chance to play gutter punk dress-up, complete with piercings, a neck tattoo and dirt caked on her face. The chance to “ugly up” is an irresistible lure for actresses, and an understood visual shorthand for thespian-year seriousness.

Hudgens plays the perennially abused, penniless but innately smart Agnes “Apple” Bailey. When we meet the 16-year-old, she’s bolting from her ramshackle dwelling after yet another fist fight with her drugged-up wreck of a mother, June (Rosario Dawson, looking even more bedraggled), and seeking refuge in suburban New Jersey with the father she never knew. That estranged Daddy is Tom (Brendan Fraser), a loaded investment banker with a vast, gorgeous McMansion and a perfect young family that is understandably rattled by the sudden appearance of this wretched urchin on their marble doorstep. When Apple reveals her hidden pregnancy, Tom coldly but sensibly suggests that she “handle it”; instead she opts to run away and promptly crash a stolen SUV.

Agnes awakens in the hospital bruised but unbroken, and she and the audience are treated to the very welcome presence of James Earl Jones, a great actor who has been shamefully scarce on the big screen lately. With his famously rich basso profundo voice and grandfatherly countenance, Jones’ gentle but spiritually resolute priest is eventually able to break through Apple’s tough girl act, and gets her to consent to not only Bible studies, but placement in a home for battered and neglected teen moms. There, surrounded by sympathetic peers, and in spite of occasional unpleasant intrusions from an increasingly deranged and overacting Dawson, Apple begins to finally flourish.

Adapted from a “true story” about the real-world shelter run by Kathy DeFiore (played by Ann Dowd), director-writer Ron Krauss’ film should be deeply moving, but fails to convince, even as we try to admire it. The story is simply too embarrassingly mawkish. Hudgens can’t overcome this kind of material, but at least she shows a willingness to learn. That’s a start.