Deutsche treat. Film set in East Germany explores the political and the personal 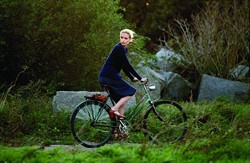 It’s 1980, and Barbara (Nina Hoss), an icy and unsmiling physician, is exiled to the East German provinces for an unexplained crime. She works at a rural hospital, is brusque with co-workers, smokes a lot and, when no one is looking, hoards money in hopes of buying her way out of the DDR and into the waiting arms of her West German lover (Mark Waschke). This film from Christian Petzold (Jerichow) shows us the same suffocating emptiness, paranoia and cruelty that fueled the Oscar-winning The Lives of Others’ depiction of life in communist East Germany.

But there is also a contradictory view, one that highlights the bonds that can be forged by those who feel oppressed, the everyday connections that form in a tight-knit community. And unlike the cold, gray, urban settings we associate with tales of life in the DDR, the landscape is green and untamed, with wild winds and stately forests.

Alongside the deep political distrust, there is warmth and humanity. But can Barbara trust any of it? Andre, the hospital’s shaggy yet sophisticated chief-of-medicine (Ronald Zehrfeld), is an exemplary physician, one who clearly shares her passion for patient care. But as affable as he may be, she cannot be certain if he wants to forge an honest relationship or is craftily fulfilling his obligation to the state by informing on her. And just how far is Barbara willing to go to help a young patient facing a mountain of troubles?

Petzold has fashioned an intriguing character study of a woman who is tough but empathetic as she struggles to maintain in an atmosphere of pervasive suspicion. There is great humanity beneath her rigid exterior, and Hoss’ outstanding performance is a deep well of subtle yet unmistakable motives and reactions. Barbara’s growing inner conflict is expressed through shifts in tone and small gestures — a softened word or unexpected flash of smile — and we can’t help but be riveted. It is the kind of performance that demands our attention.

Petzold not only relies on the skill of his lead actors (Zehrfeld’s authentically gentle manner is pitch-perfect) but has a keen eye for both emotional and narrative nuance. The austere yet finely detailed workspaces and apartments Barbara moves through bring with them honest human touches — an out-of-tune piano, a makeshift medical laboratory. The plot, which easily could have descended into predictable melodrama, is handled with both insight and restraint. Even the Stasi agents, frequently portrayed in film as violence-prone goons or sneering thugs, are depicted as bored bureaucrats. Their casual yet cruelly invasive acts are just part of the job, one that lends no exceptions but has no personal interest. If there’s a downside to Petzold’s approach, it’s that his slow-boil approach to drama can be a little too slow. With a story that eschews the unexpected for inevitable, Barbara would benefit from a touch more suspense or surprise.

What is the cost of living by your principles? In a repressive society where distrust rules, isn’t humanity and kindness worth staying and fighting for? Petzold and Hoss tackle these weighty questions with a poignant modesty that inspires reflection on how the political and personal are braided together for good and bad. The West may beckon with its freedom and prosperity, but for Barbara, the East sinks its roots into her heart. It’s a sentiment many Detroiters know all too well. mt