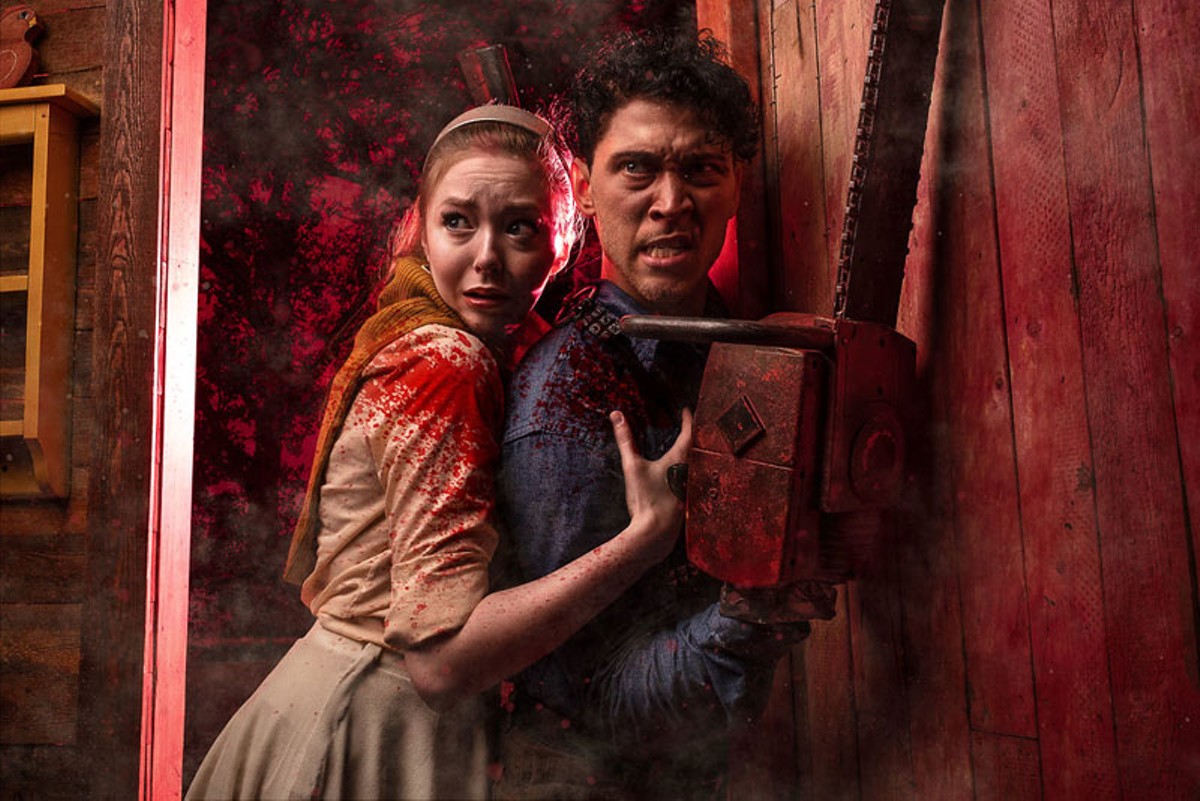 The campy cult horror classic Evil Dead is, after nearly four decades, revered as a hallmark of the horror genre — and also perhaps one of the most unlikely candidates for a musical adaptation.

For 10 years, Jamie Warrow has had a hand in the Detroit production of the off-Broadway sensation Evil Dead: The Musical. What originated as an experiment at the production's original location of Ferndale's Ringwald Theatre, which Warrow used to own and operate, has since exploded into a destination event for Evil Dead lovers and entry-level horror fans alike. From the catchy musical numbers like "Stupid Bitch" and "What the Fuck Was That?" to the "splatter zone" (also known as the front row where willing audience members will be soaked to the bone with stage blood because, like so much of the musical), everything is a nod to the film's low-budget and clever practical effects.

Directed and created by the late Sam Raimi, the Evil Dead films follow the triumphant story of smooth-talking Ash Williams, played by demon-slaying babe Bruce Campbell. Warrow credits the musical's staying power to the fact that Michigan plays such a huge role in the film, as both Raimi and Campbell are natives and much of the first installment of the series was filmed here.

A week before opening night, Warrow discusses recasting Ash and what goes into making the bloodiest and most Michigan musical of all time.

Metro Times: You're one week away. What goes into the week leading up to opening night?

Jamie Warrow: A lot of it is muscle memory because we have a lot of returning people. The challenges are incorporating the new actors that we have, brand new to the show, as well as moving Garrett Michael Harris from playing the role of Scotty to Ash. So, everybody is relearning something, at least as far as those three actors. Also, tech effects every year pose a special type of nervousness. We have a couple new effects happening this year. Tonight is actually our water tech test so the actors can get used to all the wetness the show incorporates, as far as when the stage and audience get bloody. It'll be fun.

MT: Did you have a relationship with Evil Dead before taking on the musical? As a native Michigander, it's hard to avoid its impact on this sort of cult-subculture.

Warrow: No, I really didn't. Not until I started directing. I used to own and operate the Ringwald Theater in Ferndale and the artistic director of that theater, as part of our season in 2008, selected this musical as a fun homage to the horror genre but also because of its ties to Michigan. And that's what makes this musical kind of special and enduring in this area. There are so many Michigan references in the musical. Sam Raimi is from here, Bruce Campbell is from here, the movie was filmed in large part here. The reason we chose it is initially because we thought it would be fun and because it has such a cult following in the city.

MT: In transitioning Garrett Michael Harris from the role of Scotty to Ash, what do you think is the most important quality for an actor to have to take on a character as beloved as Bruce Campbell's Ash?

Warrow: It's charisma and the ability to flirt back with the audience. And Garrett is a master at both of these things. People love him. I was on the fence about the Ash that was returning. And in the meantime, Garrett wanted to throw his hat in the ring. I didn't even consider him and he is by far one of the most astounding Ashes I've ever seen. It's physically a hard show for any actor. He gets wet. He has a hand-fight that he recreates from the movie where he does acrobatic flips. Not only is the singing super challenging for a vocalist, but he has to dance and have charm and sexuality. All of that stuff needs to be wrapped into one package. And Garrett is it.

MT: Who is the audience? Is it mostly Evil Dead fanatics or has the scope widened over time?

Warrow: If you're familiar with the Evil Dead series, you're getting the whipped cream and cherry on top because you'll be tickled by the homage and the cleverness with which this campy parody includes those references. You'll get why Linda is getting a pencil stuck in her ankle. You'll get why people yell "boomstick." Even if you don't know the movies at all, you will still have fun with it because the musical itself is spectacular, especially with the effects. Everybody's seen a scary movie. Everybody knows what's coming, so just because you don't know the inside jokes doesn't mean you won't have fun with the whole premise of the show.

MT: There are so many mechanics in making Evil Dead: The Musical work, from the effects and general challenges of managing a cast. There has to be a time where things have not gone as planned.

Warrow: Every year, almost every show. I don't want to curse it. My first year directing, every special effect seemed to not work. From the necronomicon which sort of floats, that was wonky. There's a baby that flies through the audience, and that was wonky. I thought, "Is this happening because I'm here?" We've had blood effects fail. Every show has anxiety. It's like getting on a roller coaster. You have to commit to it and get to the other side. Going on 10 years feels like such an accomplishment. I'm really proud of it. Hopefully there will be an 11th.