A Raymond Carver short gets mainstreamed and bastardized - with OK results> 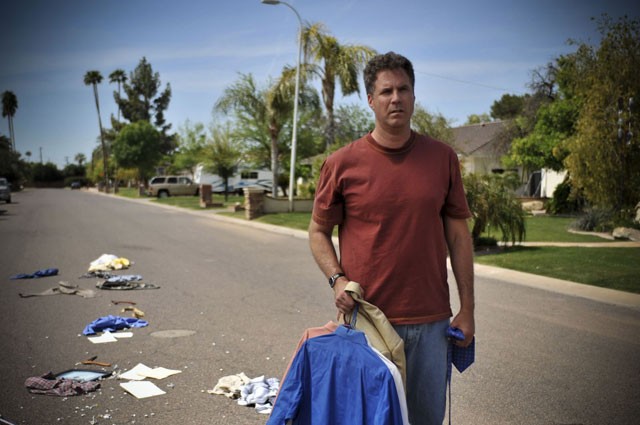 Ferrell is alky loser Nick Porter in Everything Must Go.

Well observed, well acted, and, well, not nearly sharp-toothed enough, one thing it certainly ain't is Raymond Carver. Everything Must Go is based on Carver's "Why Don't You Dance?" a terse, affecting portrait of middle-age decay that says a whole lot by not saying much at all. While there are hints and suggestions of the kind of broken-down sentimentalism and sardonic humor that characterized the author's writing (at least, until he broke away from editor Gordon Lish), first-time writer-director Dan Rush turns what might've been a biting character study into an on-the-nose tale of rebirth and minor-key redemption.

It's indie without any of the guts that make indie cinema so vital. What should have been elliptically vulnerable is, unfortunately, timid and predictable — which shouldn't be unexpected from a guy who's forged his career out of making quirky commercials.

After losing his job, alcoholic Nick (Will Ferrell) falls off the wagon and comes home to discover that not only has his wife has left him, she's changed the locks and left all of his possessions on the front lawn of their suburban Arizona home. His joint bank account has been frozen, his credit cards have been canceled, his cell-phone disconnected, and his car repossessed. Oh, and he's being sued for sexual harassment. Good times. With only a whole lot of Pabst Blue Ribbon to soothe his defeats, Nick decides that the best course of action is to stay put, hunkered down in his overstuffed chair. Enter the likeable chubby kid (Christopher Jordan Wallace, son of the Notorious B.I.G.) and pregnant and newly moved-in neighbor from across the street (the divine Rebecca Hall). Cautious friendships are forged, awkward revelations ensue, and Nick decides to hold a yard sale, learning about himself as he sheds his material possessions.

It's all so un-Carver like. The original short story's central premise — an unnamed, alcoholic, middle-aged man stranded on his lawn with all his possessions entreats a young couple to dance for him — bordered on the profound. What made Carver's elliptical tale so suggestive and sadly haunting were the spaces it gave the reader to ponder. Rush's Everything Must Go might as well be called Everything Must Be Explained. His adaptation underlines and openly expounds on its themes and backstory, becoming less illuminating the more it reveals.

It's not that he and Ferrell cop out on depicting Nick's flaws; the character is mostly a selfish jerk. It's that they feel the need to soften his edges, assuring us that, in the end, Nick's really just a decent guy who's lost his way. And in case you miss the point, there's the lovely Laura Dern to remind you with lines like: "You have a good heart, Nicholas. That doesn't change."

When the fortune cookie that says "Everything is not yet lost" shows up, there's little doubt we've left Carver's morose and ironic landscape of the lost far behind and entered Indiewood — a place where life lessons are learned in a weekend, and redemption is right around the corner.

A few sharply written scenes and the obvious dedication of its cast hold it all together. While everyone brings nuance and depth to otherwise one-note characters (did I mention how divine Rebecca Hall is?), it's Ferrell who shoulders the load, delivering a poignantly subdued and richly layered performance. Though his broad comedic instincts peek out from time to time, there's a real sense of vulnerability and rage behind his unexpectedly expressive face. We may not like Nick (especially in the early going), but we definitely sympathize. And when he forecasts Hall's dismal future, we believe every bitter word.

"Can't this happen another day?" Nick wearily pleads on his wife's voice mail when he first arrives home. It's a tragically simple request that captures the defeat of a man who knows he's entering a downward spiral. And even though Everything Must Go's script makes it all-too clear where that spiral will eventually lead, Ferrell manages to keep us guessing. Even Carver would be impressed.