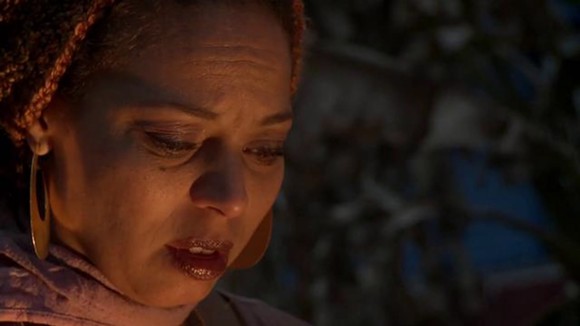 Still from 'The Becoming Box' by Monique Walton
This looks incredibly good: A selection of short films as part of the DIA's Afrofuturism film series, which itself is connected to the excellent '30 Americans' show, which is still up for another two weeks. It's the final program in the series, so definitely try to make it. The program starts at 7 p.m., it seems that tickets are still available, and any details you'd like are hopefully here.

Happy New Years! We begin 2016 with the end of the Afrofuturism Series. Join us for the screening of five short films: Drexciya by Akosua Adoma Owusu, The End of Eating Everything by Wangechi Mutu, The Becoming Box by Monique Walton, Deluge by Nijla Mu’min and Aljana Moons by Alexis Peskine. Below are the descriptions.

Drexciya by Akosua Adoma Owusu
A portrait of an abandoned public swimming facility located in Accra, Ghana. The Riviera was once known as Ghana`s first pleasure beach. A one-time extravagant Ambassador Hotel of postcolonial - early Kwame Nkrumah era, the Riviera Beach Club thrived until the mid-1970`s. The Olympic-sized pool, now in a dilapidated state, is used for locals for things other than swimming.”USA, Ghana 2010 11:30 min

The End of Eating Everything by Wangechi Mutu
Using animation, Mutu discusses overconsumption through a flying, planet-like creature navigating a bleak skyscape. The video was commissioned by the Nasher Museum as part of the exhibit Wangechi Mutu: A Fantastic Journey.USA 2013, 8 min

The Becoming Box by Monique Walton
A sci-fi short film that follows a family of three siblings dealing with the appearance of a mysterious box in their backyard in the aftermath of Hurricane Katrina. One sister’s pursuit of the truth about the box will facilitate a paradigm shift that will change their world forever. Inspired by Octavia Butler, the Becoming Box deals with recovery, rebirth, and reinvention.US, 2011, 16 min.

Deluge by Nijla Mu’min
After witnessing the mass drowning of her friends and struggling with the decision not to jump in, 15-year old Tiana must decide if she will join the order of black mermaids that protect the waters where her friends rest. This film is partly inspired by the 2010 mass drowning of six black teens in a Shreveport, Louisiana sinkhole. None of them could swim. The film blends coming of age drama and fantasy to explore traumatic memory in a post- BP oil spill New Orleans.USA 2011 12:55 mins

Metro Times music editor Mike McGonigal has written about music since 1984, when he started the fanzine Chemical Imbalance at age sixteen with money saved from mowing lawns in Florida. He's since written for Spin, Pitchfork, the Village VOICE and Artforum. He's been a museum guard, a financial reporter, a bicycle...
More
Scroll to read more Arts Stories & Interviews articles
Join the Metro Times Press Club