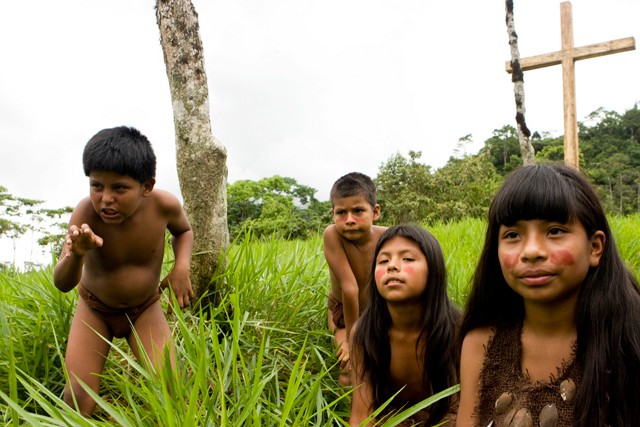 Even the Rain: Not kids in America.

Movies with a social conscience are tricky. Most are overly didactic or presented as barely dramatic debates that are all too aware of the points they're trying to make. Even the Rain, despite its opening dedication to Howard Zinn (leaving little doubt of the filmmaker's political leanings), manages to do a surprisingly good job of balancing agitprop with engaging drama, delivering a visually poetic, well-acted and fitfully compelling treatise on the abuses of colonialism and capitalism.

Using meta-cinema to make her point, actress-turned-director Iciar Bollain's Even the Rain follows a group of filmmakers to Bolivia, where they are shooting a movie critical of Columbus and his dealings with Catholic missionaries who opposed Spain's exploitation of the indigenous Indians. Sebastian (Gael Garc�a Bernal), the film's intense and liberal director, struggles to rein in his alcoholic and arrogant leading man (Karra Elejalde) and Costa, the movie's exploitative producer (Luis Tosar), who obsessively frets over the bottom line. Casting a local activist named Daniel (Juan Carlos Aduviri) as the chieftain who resisted the Europeans and was executed for his efforts, the production runs into trouble when Daniel gets arrested for fighting against Bolivia's privatization of local water rights. With the movie in danger of being shut down, the filmmakers' self-interest is pitted against their idealism, the supposed motivation for making the movie in the first place.

Dealing with right, wrong, political hypocrisy, and the historical chain of exploitation and prejudice, Bollain's centuries-spanning morality tale mostly sidesteps partisan sermons in favor of allegorical drama. Occasionally, she gets heavy-handed in her parallelism, but by focusing on how the political becomes personal, and applying an authentically gritty mood to the story (she uses footage of real street demonstrations over the water issue), Even the Rain rises above its predictable scripting.

Paul Laverty's screenplay has only one twist, and it's a small one that never digs deep enough. As Sebastian's ego overrules any instinct for social justice, penny-pinching Costa discovers that he's a lot less cynical (and a lot more empathetic) than he realized. The character shifts are handled reasonably well, but, unfortunately, messaging eventually overtakes narrative good sense, turning any chance for emotional or intellectual realization into didactic contrivance.

It's clear that After the Rain wants to be so much better than is. Bollain seems to recognize the pitfalls of blending social commentary, moral awakening and the injustices of history into an engaging drama, but, in the end, despite her respectable efforts, she still falls victim to them.