Echo Fest, Indigenous Peoples Day, Cider in the City, and more things to do in metro Detroit this week 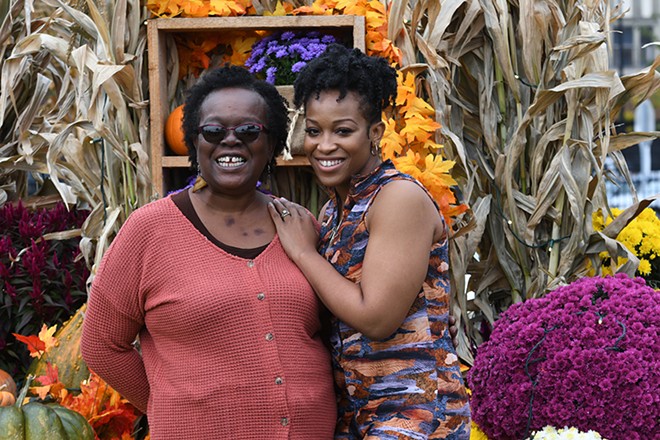 Courtesy of Downtown Detroit Partnership
Cider in the City.

Friday, 10/8-Saturday, 10/9: If you identify as someone who is strange and unusual, find that Harry Belafonte's "Day-O!" lifts you up and/or you cannot decide whether Michael Keaton's portrayal of a crusty, sarcastic, greasy-haired demon was disgusting or kind of sexy, then it might be showtime, baby. To help properly kick off the best month (not sorry) is some classic Tim Burton surrealness on the big screen. The Redford Theatre will host screenings of 1988's Beetlejuice, starring Alec Baldwin, Geena Davis, Catherine O'Hara, Winona Ryder, and the ever-seductive Keaton (OK — we've decided he's kind of hot). But the Redford won't be doing it alone, as the film will be accompanied by a performance by the Goblin King Players who will serve as the shadowcast masters as they bring the film to life... or death... or back to life. What in the Netherworld is a shadowcast? Well, while the film plays, the Goblin Players will act out the film with accurate costumes, props, and impeccable timing. Think of it as the ultimate 3D moviegoing experience. Did we mention that there will be sandworms in attendance? Yeah ... maybe we should have brought that up earlier. —Jerilyn Jordan

Friday, 10/8-Saturday, 10/9: These are some strange times, folks. Especially for those of us who cover live events during the pandemic as we are constantly made to feel that we have returned to "normal" (whatever the fuck that is) only to have concerts, festivals, and all fun things postponed, rescheduled, or, in many cases, canceled. While big-ticket concerts figure out what the hell they're doing, we in Detroit are thankful to have a loyal, responsible, and totally badass local music scene to soothe our woes and usher us into the ever-expanding unknown. Thanks to Detroit's own neo-psych-rock outfit Sisters of Your Sunshine Vapor (think Flaming Lips and Brian Jonestown Massacre) who will once again host Echo Fest, this time, with all Detroit area-based bands. The two-night fest at Outer Limits Lounge will include Friday performances by Just Guys being Dudes, the Characteristics, Toeheads, Jemmi Hazeman & the Honey Riders, and, on Saturday, Vulgars, Duende, Tart, Wiccans, the Muggs, and Sisters of Your Sunshine Vapor. This is the kind of normal we need which is, well, as you'll see, freaky as fuck. Just how we like it. —Jerilyn Jordan

Saturday, 10/9: Hamtramck is known for, well, a few things, including but not limited to: incredible Polish, Yemani, and Bangladeshi food; Disneyland (no, not that one); celebrations big and small; improv comedy; and street parking chairs (if you know, you know). But the cultural hub touted as "the world in two square miles" is mostly known for its people, many of whom are artists, writers, musicians, and creative souls. It only makes sense that Hamtramck should do what it does best: throw a party. The Hamtramck Neighborhood Art Festival returns for its 11th year, aptly called the "Back to Life Edition" will, once again offer a walkable, neighborhood-scale, art experience that is accessible by way of porch, stoop, sidewalk, storefront, studio, and select houses. The loosely curated day-long festival will feature musical performances, poetry workshops, art installations, open studio tours, homemade musical instrument workshops, film screenings, tapas tastings, art sales, and more. Just please make sure you check the schedule and map before you start, like, trespassing on people's personal property. And, whatever you do, do not move a chair to park your car. You've been warned. —Jerilyn Jordan

Saturday, 10/9: Whatever you do, do not refer to IDLES, the British, uh, band — led by Joe Talbot — as a punk rock band. Despite being punk rock, the band rejects the label. And don't call them "post-punk" either because they don't like that. In fact, we're not sure they want to be called anything other than IDLES, the band that takes on everything from rape culture ("Sexual violence doesn't start and end with rape/ It starts in our books and behind our school gates," Talbot shouts on 2017's "Mother") and toxic masculinity ("I'm a real boy, boy, and I cry/ I love myself and I want to try/ This is why you never see your father cry," he wails on 2018's "Samaritans") and, on last year's release Ultra Mono, fictional villages, like on "Model Village," which finds Talbot dismantling fascism, racism, and alarmism. Evidenced by the first taste of their forthcoming fourth record, Crawler, due out on Nov. 12, it looks like IDLES, the non-punk punk rock band, is getting downright soulful. On "The Beachland Ballroom," a tribute to artists who pay their dues playing bars and small venues with the hopes of one day playing a large room or arena, Talbot sings. Maybe he'll change his tune on the whole punk thing. —Jerilyn Jordan

Cider in the City

Saturdays 10/9-10/30: For us city folk, part of the draw of cider and doughnuts season is the 45-plus-minute drive past the suburbs and stripmalls to your choice of orchard where you can pick pumpkins, apples, and score a perfectly greasy bag of doughnuts and a fresh half-gallon of crisp and refreshing cider. But before you hit the store, there's a city slicker solution for our dire cider and doughnut needs. Cider in the City is returning to Detroit's Beacon Park, bringing the orchard to the 313. (Well, minus the dirt, livestock, and cornfields.) The Downtown Detroit Partnership, DTE Beacon Park Foundation, and Blake's Farms collab will take place Saturdays through Oct. 30 and will offer seasonal crafts, horse-drawn hayrides, live music, a selfie flower wall, pumpkin picking, food trucks, games, and, of course, cider and doughnuts. Though the Saturday events will offer cider and doughnuts for purchase, it's recommended that you pre-order, which can be done up until Friday at noon each week. —Jerilyn Jordan

Sunday, 10/10: Power to the people... who write the words you read because, take it from us, a bunch of truly unhinged writers: writing is hard. Sure, for some of us, the written word flows from our brain to our fingers to our keyboards and notebooks, but, for most people, making words happen is no easy feat. As for the people that physically print the words and the images that accompany them, like the folks at Eastern Market print shop Signal-Return, well, it's a labor of love, too. To help honor the power of the press is Signal-Return's aptly named Power of the Press fest. The fest made its debut in 2017 with a five-day workshop-packed event and, for 2021, it has condensed all the print-shop fun down to a single day. The event, which is sponsored by Applebaum Family Philanthropy, invites guests to attend workshops and demonstrations on wood engraving, paper marbling, woodcut prints, paper making, and book arts. As part of the fest, there will also be more than 50 artists and vendors set up as well as access to the Quarantine Public Library, a repository of books made by artists that, during the pandemic, were published online for anyone to freely download, print, and assemble. —Jerilyn Jordan

Event runs from 11 a.m.-4 p.m. at Eastern Market's Shed 5, Detroit; signalreturnpress.org. Event is free and open to the public, fees may be required for workshops.

Monday, 10/11: If you live or visit Detroit, you should know that the city occupies the contemporary and ancestral homelands of three Anishinaabe nations of the Council of Three Fires: the Ojibwe, Ottawa, and Potawatomi. The acknowledgment of the indigenous lands, though not enough, is a way to honor the traditional guardians and enduring caregivers of this land and is also a means to stop Indigenous erasure. Land acknowledgments are becoming more common, and rightfully so. What they failed to teach us in school, between the handprint turkeys and Christopher Columbus worship, is that we, as in the collective we, occupy stolen land. You don't have to feel weird about it (it's not like it's your fault), but it is our responsibility to make these acknowledgments as well as make a safe and supportive space for those Indigenous voices in our communities. To honor national Indigenous Peoples Day, which was created as a counter-celebration to Columbus Day, Detroit will, once again, celebrate thanks to local groups Vibes With The Tribes, We Are Culture Creators, and Fiesta Vibes. The free event is alcohol-free and will host a bonfire, music, tacos, infused juices, and enlightened conversations, and community connection. In other words, a great way to enjoy mno bimaadiziwin, or, "the good life." —Jerilyn Jordan