DSO goes ‘Star Wars,’ Charivari, Ribs and R&B, and more things to do in Detroit this week 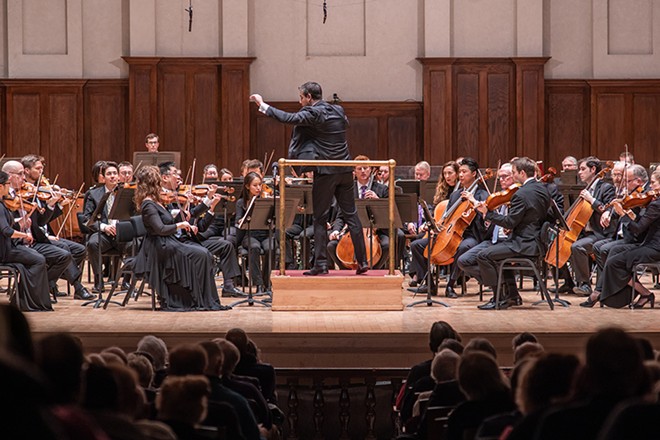 Courtesy of the DSO
The Detroit Symphony Orchestra.

Thursday, 8/12-Sunday, 8/15: The future is now, folks. This couldn't come at a better time because, as we all know, the past can be, well, pretty shitty. The folks behind Charivari, the insanely stuffed four-day electronic music festival that celebrates wellness, culture, and, of course, Detroit's contributions to house, techno, and electronica. The multi-faceted festival, which is in its eighth year, will return for in-person entertainment after pivoting to a month-long virtual festival in 2020 — and they're not holding back. More than 60 DJs will take the stage, including up-and-coming artists, as well as pioneers of the genre like Tylr_, Mike Clark, DJ Minz, DJ Godfather, Koruptid, Steve Crawford, and DJ Cent. They also have an all-women stage because girl power, duh. But it's not just the music Charivari wishes to shine a spotlight on, as organizers hope the event can showcase behind-the-scenes producers, yogis, and artists from the Motor City. To get your dancing muscles, bones, and joints primed for four days of dancing, both Saturday and Sunday will kick-off bright and early with yoga sessions that integrate movement and music from artists like Problematicblackhottie and Mona Black. —Jerilyn Jordan

The Music of Star Wars performed by the Detroit Symphony Orchestra

If you guessed something by Canada's own Crash Test Dummies, good guess, but no and also eff you for getting their 1993 hit stuck in our heads. To quote one beloved — and vocal — Wookiee: "RRRAARRWHHGWWR."

Also a wrong answer, but getting warmer. While we're not 100% sure as to what Chewbacca is saying, like, ever (we'll leave that to Han) the sounds of the Star Wars saga — including its theme song — are among the most iconic in all of cinema and, for those who identify with the rebels, imperials, and galactic scum of a galaxy far, far away, the sounds are downright meditative and/or masturbatory. The most memorable sounds from the popular space opera, however, were a result of mastermind and composer John Williams, who defined complex characters with compositions like "The Imperial March" and "Leia's Theme" and made some of the most pivotal cinematic Star Wars moments ("I love you." "I know.") even more memorable through music.

Putting the "star" in "star wars" is the Detroit Symphony Orchestra, which will be honoring Williams' scores when they perform a brand-new program that will include music from all nine movies within the Skywalker Saga (1977's Star Wars: A New Hope through 2019's Star Wars: The Rise of Skywalker, and, yes, the Jar-Jar Binks trilogy is included), as well as other canon films including Rogue One and Solo: A Star Wars Story. —Jerilyn Jordan

Friday, 8/13: What do you get when you combine salty, grilled meat, the Detroit riverfront in the summertime, and the group that brought us hits "Little Walter," "If I Had No Loot," and "Feels Good"? Aside from a little heartburn, you would get the three-day celebration of barbecue and R&B, jazz, and gospel music via the Ribs and R&B Music Festival, which will spice up Detroit's Hart Plaza. The three-day festival will feature a gaggle of grilling gurus and a sonic schedule filled with some tune-carrying Tonys, including festival headliners Tony! Toni! Toné!, as in, like, the original group featuring Raphael Saadiq. There will be more than 30 performances across two stages, including appearances by Alexander O'Neal, Miki Howard, Al B. Sure, as well as Laquint Weaver and Friends, and Deon Yates, who will perform as part of Saturday and Sunday's Gospel and Jazz Explosion lineup. While the event is free on Friday before 5 p.m. and Saturday and Sunday before 2 p.m.(the price goes up to $10 after), food will be available for purchase — but you might want to pack a whole mess of moist towelettes because no one wants to clap with BBQ sauce fingers and with COVID, you might not want to lick your fingers clean no matter how damn tempting it might be. —Jerilyn Jordan

Saturday, 8/14: What's red, fed, and punk all over? The fourth annual Punk Rock BBQ, baby, which will paint Core City red with BBQ, attitude, and tunes from metro Detroit's finest raucous rocker and angst-wielding weirdos. Hosted by Stacey McLeod of Dear Darkness, the annual Punk Rock BBQ, which was previously held at Hamtramck dive bar Kelly's (RIP), will feature performances by Midas, the Cult of SpaceSkull, Timmy's Organism, Mach, Caveman & Bam Bam, Hail Alien, and more. There will be 20 vendors, too, spanning a variety of needs, including Remove Records, which makes cassette compilations of all PRBBQ bands and then donates the proceeds from the tapes back to the bands and Survivor Strong, which supports survivors of gender-based violence through community and advocacy. Damn. Being punk has never felt so good. Oh, and also the Cold Truth ice cream truck will be serving up treats inspired by the performers. We'll take a SpaceSkull's Strawberry Blood Forever and a small Lime Slime ala Timmy's Organism. Attendees are encouraged to bring their own grills, chairs, tents, water guns, coolers, and whatever else will get you feeling wet, wild, and ready to shred. —Jerilyn Jordan

Sunday, 8/15: When U.S. sprint runner and rising star Sha'Carri Richardson was banned from participating in the Tokyo Olympics after a drug test revealed she had THC in her system, which she used during a moment of emotional despair, it appeared as if everyone had something to say. If you're like us, the news left you scratching your head wondering how the hell could marijuana be considered a performance-enhancing drug, as many of the prohibited Olympic substances are considered? Like, have you ever done any physical activity while under the influence of sweet, sweet cheeba? Well, Diop Shumake, a 26-year-old runner, cannabis advocate, and founder of Runner's High, supports the idea that athletics and cannabis/CBD use, or as we like to call it, "canna-letics," can be beneficial for athletes and is fighting to eliminate the stigma surrounding weed and sports. Founded in 2017, Runner's High is an education-based organization that raises funds to further the University of Michigan's cannabis research. To raise awareness and funds, Runner's High will host their inaugural 5k run/walk on Belle Isle. You don't have to be a smoker, toker, or even a runner to participate, as Shumake says the race can serve as an intro into both or as a form of protest for those who find themselves enraged by Richardson's situation and/or the general injustice surrounding cannabis laws. —Jerilyn Jordan

Tuesday, 8/17: If you caught Questlove's directorial debut Summer of Soul, then you might remember a nervous and totally transcendent Mavis Staples singing alongside Mahalia Jackson. The documentary, composed of unearthed stunning footage and performances from the 1969 Harlem Cultural Festival, later dubbed "Black Woodstock," features performances by Stevie Wonder, Nina Simone, Sly and the Family Stone, and Staples, who was passed the mic during Jackson's performance of Martin Luther King Jr.'s favorite song, "Take My Hand, Precious Lord."

Now at 82, Staples is revered as an icon. Staples, a legendary gospel singer who has done the following: marched alongside Dr. Martin Luther King Jr. in Selma, Alabama; performed at the inauguration of John F. Kennedy, and, years later, for President Barack Obama; has been inducted into both the Rock 'n' Roll and Blues halls of fame; been the subject of a 2015 HBO documentary; has collaborated with Bob Dylan, Prince, Gorillaz, Pusha T, Arcade Fire, Ben Harper, and Jeff Tweedy, and, on 2011's Grammy-winning Livin' on a High Note, she covered songs by Nick Cave, Tune-yards, Neko Case, M. Ward, and Justin Vernon. This is but the tip of the iceberg in terms of Staples' incredible career as the coolest woman in music since she was 13 years old performing gospel music with her father and her siblings as the Staple Singers, a group that scored a Lifetime Achievement Award from the Recording Academy.

Staples will perform at Wildwood Amphitheatre as part of Audiotree's "Across the Stars" summer concert series. —Jerilyn Jordan