DJ MK, women artists in Italy, Elton John, and more things to do in metro Detroit this week 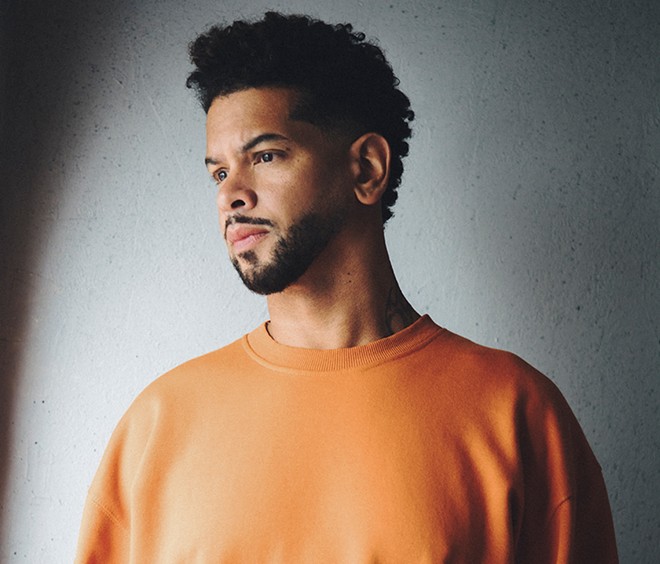 Thursday, Feb. 3 and Friday, Feb. 4: Chef Ederique Goudia is back at it again, sharing her love for the African diaspora’s contributions to the culinary world at Hazel Park’s Frame. This time she’s honoring her Creole lineage with a cajun-inspired feast at Frame’s rotating kitchen for two nights. The five-course menu features shrimp and mirliton bisque, duck confit and smoked chicken andouille gumbo, and bananas foster shortcake for dessert; the chef will also debut her Paradise Valley Salad, which was made with greens from local hydroponic farm Planted Detroit. Goudia takes her role as a chef far beyond the kitchen as she pours back into the community she serves — in 2021 she co-founded Taste the Diaspora Detroit, which helped raise more than $8K in relief funds for those affected by Hurricane Ida in Wallace, Louisiana. For this week’s dinner, Goudia will be working with students of the Detroit Food Academy, who will get real-world restaurant experience by helping prep and plate each course. —Randiah Camille Green

Friday, Feb. 4: Producer and DJ Marc Kinchen, known as his moniker MK, has had quite a career since emerging from the Detroit house music scene in the ’90s with tracks like “Always” and “Burning,” as well as “4You” and “Just A Dream” as 4th Measure Men. In recent years he’s scored international hits with remixes of Storm Queen’s “Look Right Through, Wankelmut & Emma Louise’s “My Head Is A Jungle,” Shirley Caesar’s “Teach Me,” Rudimental’s “Powerless” featuring Becky Hill, Disclosure’s “White Noise,” HotNatured’s “Reverse Skydiving,” and Lana Del Rey’s “Blue Jeans,” “Summertime Sadness,” and “West Coast” — as well as remixes by HAIM, Rihanna, Diplo, Tove Lo, Halsey, Elderbrook, MaryJ Blige, Sam Smith, Sigrid, Ellie Goulding, London Grammar, among others. A festival favorite, it’ll be a treat to see MK at a room like Elektricity. —Lee DeVito

By Her Hand: Artemisia Gentileschi and Women Artists in Italy

Starting Sunday, Feb. 6: The Detroit Institute of Arts hopes to correct the male-dominated retelling of art history with its latest exhibit, By Her Hand: Artemisia Gentileschi and Women Artists in Italy, 1500–1800. Opening on Sunday, Feb. 6 through Sunday, May 29, the exhibition features work by the prolific Artemisia Gentileschi and 16 other Italian women from the birth of the Renaissance through the Enlightenment period. Nearly 60 artworks showcase confident self-portraits, still lifes, and Baroque religious scenes like Gentileschi’s “Judith Slaying Holofernes.” The exhibit also includes a multimedia component with audio, video, and interactive storytelling, which visitors can access using their smartphone. —Randiah Camille Green

See museum for hours; Detroit Institute of Arts; 5200 Woodward Ave., Detroit; 313-833-7900; dia.org; Tickets range from $8 to $18 are free for DIA members, and discounted for residents of Wayne, Oakland, and Macomb counties.

Tuesday, Feb.8-Wednesday, Feb. 9: Pride month ain't over yet. Light up those wind-blown candles, because the sun is not going down on Elton John’s massive three-year-turned-four-year farewell world tour. The 300-date career-spanning victory lap dubbed the “Farewell Yellow Brick Road Tour” kicked off in 2018, which included a stop at Detroit’s Little Caesars Arena that fall. Then, the now-74-year-old “Rocket Man” plotted to make a return trip to Detroit last spring for a pair of back-to-back shows which were, along with the rest of his itinerary, unsurprisingly postponed due to the pandemic — until now.

John is keeping good on his tour promise and will not only fulfill the previously announced pair of dates at LCA Feb. 8-9, 2022 but will bid his likely final adieu to his legion of Detroit fans when he performs at Comerica Park on Monday, July 18, 2022. We're not sure about you, but this certainly sounds like a good opportunity for a cameo from John’s notable Detroit rapper friend who may or may not have gifted the legendary piano man a pair of diamond-encrusted cock rings in honor of his civil union. Your move, Slim. —Jerilyn Jordan