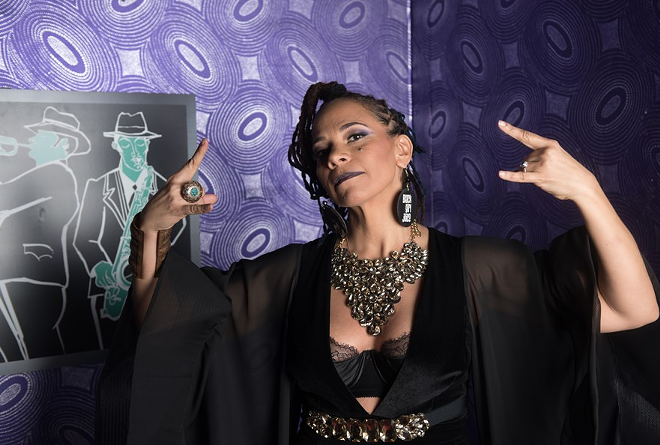 Kahn Satori Davison
Executive producer of Black Women Rock, Jessica care Moore.
“Rocka rolla woman for a rocka rolla man. You can take her if you want her if you think you can,” Judas Priest once said. Psych — even if you think you can, the ladies of Black Women Rock are ready to kick your ass if you try. After a nearly two-year hiatus, the Black rock collective is heading back to the stage with a Betty Davis Tribute at the Charles H. Wright Museum this month.

Black Women Rock will perform at the Wright on Saturday, March 26. There will also be an exhibition and kick-off party at the Andy Arts Center on Thursday, March 24, and a post-show artist talk with yoga and a continental breakfast at the Wright on Sunday, March 27. Tickets to the performance are $35 and can be purchased online. The kick-off exhibit and post-show events are free.

“Please save all these dates & find a way to get to Detroit for the baddest rock & roll concert on the got damn planet,” Black Women Rock executive producer jessica Care Moore wrote announcing the group’s return in an Instagram post.

As the name suggests, the group is made up of Black women rock ’n’ rollers, mostly from Detroit, who perform original music, cover songs, and spoken word poetry.

Moore, a longtime, badass Detroit poet, founded Black Women Rock back in 2004. Since then the group has had several sold-out performances and even co-headlined with Erykah Badu at Chene Park.

While Black Women Rock was always sort of a Betty Davis Tribute, they have now re-branded to “Daughters of Betty” following the pioneering singer’s death last month. Moore remained active during the pandemic, performing around the country and working on her first feature film He Looked Like A Postcard, but Black Women Rock’s last live show was in 2019. They streamed a performance on Facebook live in 2020, but there’s nothing like experiencing their electric energy in person.