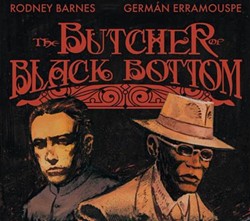 This slasher tale is the brainchild of Rodney Barnes, who is known for his Killadelphia comic series. The screenwriter turned comic writer also wrote and produced The Boondocks, Everybody Hates Chris, and others.

Set in the 1920s, The Butcher of Black Bottom takes place at a time when many African Americans were migrating to Detroit from the South, and racial tensions were reaching a boiling point. While Barnes wrote the story, Argentine artist Germán Erramouspe handled the illustrations for the comic.

“The Butcher of Black Bottom speaks to the struggle to find racial harmony in a post-Civil War America, where the migration of blacks from the South meets an industrializing North wrestling with its own issues,” Barnes writes on his Substack, Dark Apocrypha Presents. “As one might imagine finding peace at this time was no easy chore.”

The comic will debut on Dark Apocrypha Presents before being released in print through Zombie Love Studios.

Showing a further affinity for Detroit, Barnes also has an upcoming comic about Alice Cooper, titled Alice Cooper vs. The Prince of Darkness.