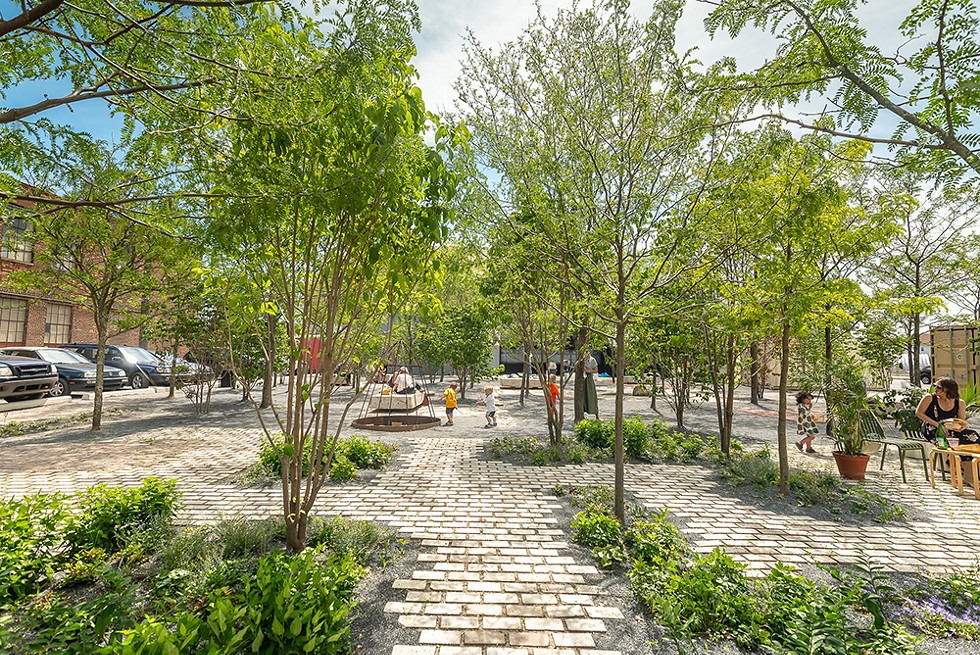 When developer Phillip Kafka first started buying property along Grand River Avenue near Detroit’s Core City neighborhood about a decade ago, what is now dubbed Core City Park was a garbage-ridden, overgrown parking lot surrounded mostly by abandoned buildings. Once Kafka’s team started digging, they discovered an old, razed firehouse once stood here; an excavated stone slab that now sits nearby has the year “1893” engraved in it. Today, the 8,0000 square-foot park has benches, tables and chairs, a bonfire pit, sculptures, and — most importantly, according to Kafka — about 100 trees.

“I would say this is the project that is the most exciting to me, and that I’m the proudest of,” he tells Metro Times over coffee on a recent sunny afternoon. “The park is really the nucleus of this commercial development.”

Kafka’s developments through his company Prince Concepts include the next-door Argentinian restaurant Barda (formerly Magnet) and Ochre Bakery. Kafka’s office is upstairs, as is Lafayette American’s, ad man Toby Barlow’s boutique agency, while the florist Bloomscape is around the corner. Coming soon are the offices of Gunner and Hobbes, two Detroit-based animation studios, as well as a market next to Ochre. Across the street is TrueNorth, a village-like community of nine Quonset huts, or massive, arching prefabricated metal structures. Further south is the Caterpillar, a single eight-unit building in a similar style surrounded by wooden porches, more trees, and a winding path — some day, Kafka says, the path will amble through all his developments in the area, inviting people to wander through them. The projects helped Prince Concepts become recently named the “Best of Practice” developer in the Midwest by The Architect’s Newspaper. 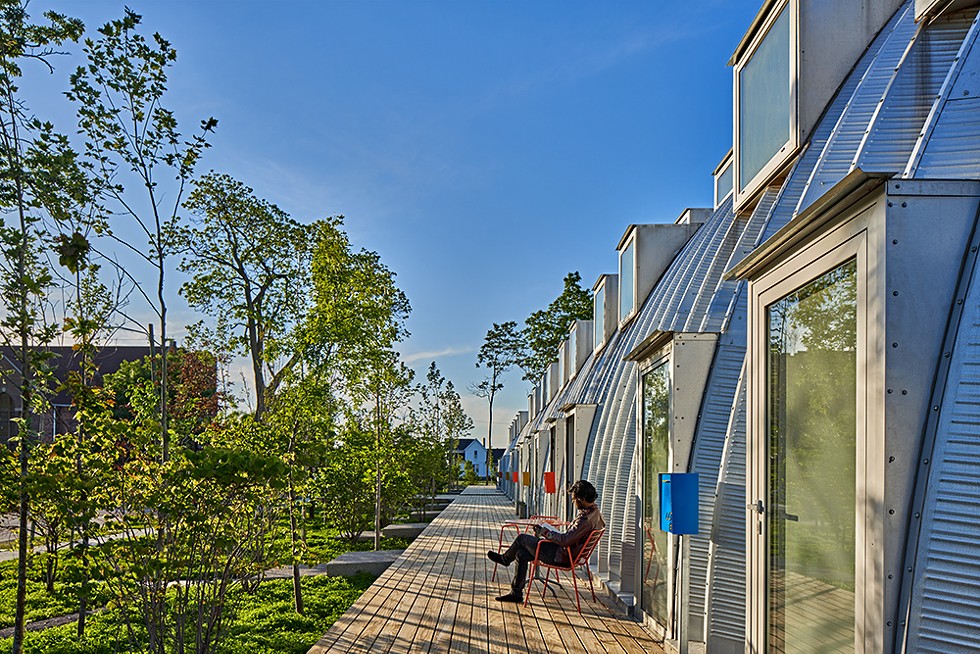 Kafka says when he first moved in, there were only five occupied homes in the area, and the buildings surrounding Core City Park were largely abandoned. “These were all empty, derelict buildings that needed to be renovated, and we had a neighborhood where the five people who were here were excited about anything that we were going to do,” he says. “And so to me, and development, that is a rare condition.” Creating an inclusive design, he says, was key. “Even the people who go to the soup kitchen here next door, they might not come to Ochre Bakery and get a $3 coffee every day, but they definitely sit on the benches while waiting for the bus,” he says.

Kafka says the park is an example of how development should “emerge, not descend.” “You don’t go to a place with an idea of what you want to build, and just impose it upon a place,” he says. “You really have to spend a lot of time understanding it.”

Kafka is an outsider to Detroit, or at least, he once was. Originally from Texas, he had a career in advertising in New York City, which is where he says he got an affinity for public spaces. “That’s what makes New York so fun, because if you’re not in your apartment, you’re constantly in public space,” he says. “Here, you spend a lot of time in your car.”

Around 2012, Kafka started visiting Detroit. He says he visited the city more than a dozen times in the span of a year, and by the end of it he bought the building that would become Detroit’s trendy Takoi restaurant.

“I was just working, working, working, and I started wanting to do more,” he says. “And I came to Detroit, and I was just, I thought it was so interesting. … It's built as a 2 million-person city, and its population is a fraction of that. So to me, I said, ‘Wow, this is very unique. There’s so much space here.’” 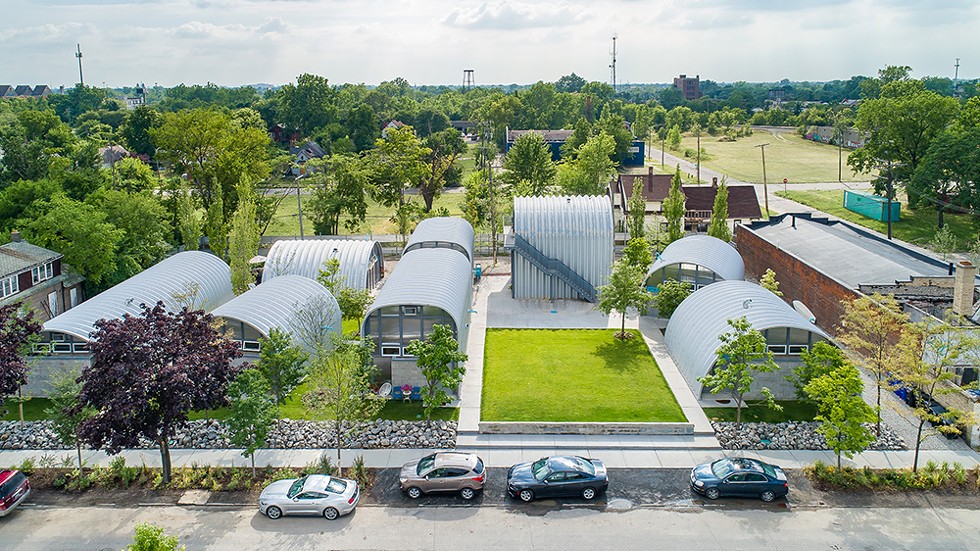 A few years later, he started putting up billboards in New York City promoting the then-new restaurant (formerly known as Katoi), and also imploring New Yorkers to give Detroit a try. One sign, using an image appropriated from Diego Rivera’s famous Motor City murals, read, “Detroit: Just west of Bushwick.” (At the time we were skeptical of the campaign, but we’ll be damned: we have since learned of at least one guy who saw a sign and decided to move to the Motor City.)

“All I can say for advertising, is that if you do a good ad campaign, you do a good billboard, that can get people in the door, but it won't sell them the product,” Kafka says. “I knew that the billboard was to get people to Detroit, but it’s a certain type of person that was going to be attracted to it. The billboards weren't going to change who was going to be interested in this place, but maybe if it sent 10 people that were intrigued here, then one of them stayed.”

While walking through the developments, Kafka speaks in Spanish to construction workers at the Caterpillar, and then in American sign language to a man walking down the street. Near one of the previously existing houses on the block, Kafka picks up a discarded beer bottle while saying hi to a neighbor sitting on his porch.

“How are you doing?” he asks. When the neighbor, in turn, asks him, Kafka says, “You know what, every day is a gift from God — some more beautiful than others.”

Kafka says he has more developments on the way, including a nearby complex of 15 duplexes, as well as a parking lot that will be buffered with even more trees.

“It’s not the most profitable idea, but if you really believe in the future, you plant trees, because that's what I really believe — planting trees communicates belief in the future,” he says. “I can’t wait. Like, imagine this park in 10 years when these trees are growing up. It’s going to be magnificent.”